The intent here is to make a film about family, for the families. But what we get is a couple of hours mash up of scenes from popular relationship dramas. Story teller Era. Saravanan has not packed anything new from the regular cliches that we are so used to. Even his characterization is not good enough to make us root for his characters.

Over the past few years Tamil cinema has had a good number of female oriented subjects. Thanks to actress Nayanthara for being the trend setter. Now many actresses in Tamil cinema try to walk down the aisle carved by her. Unfortunately, not many could replicate the success that she managed to reach. But there is one actress who not just enjoys success in essaying women centric roles but has taken the game to next level. It is none other than actress Jyothika. Ever since she started her second innings in K-town she has been changing the dynamics of how Tamil cinema handles its female characters. Her choice of characters lately bear witness to the statement above. Udanpirappe is a special venture for the star actress as it marks the 50th film of her career. So, how has the sentimental drama come out? To know that let us get in to the movie review. 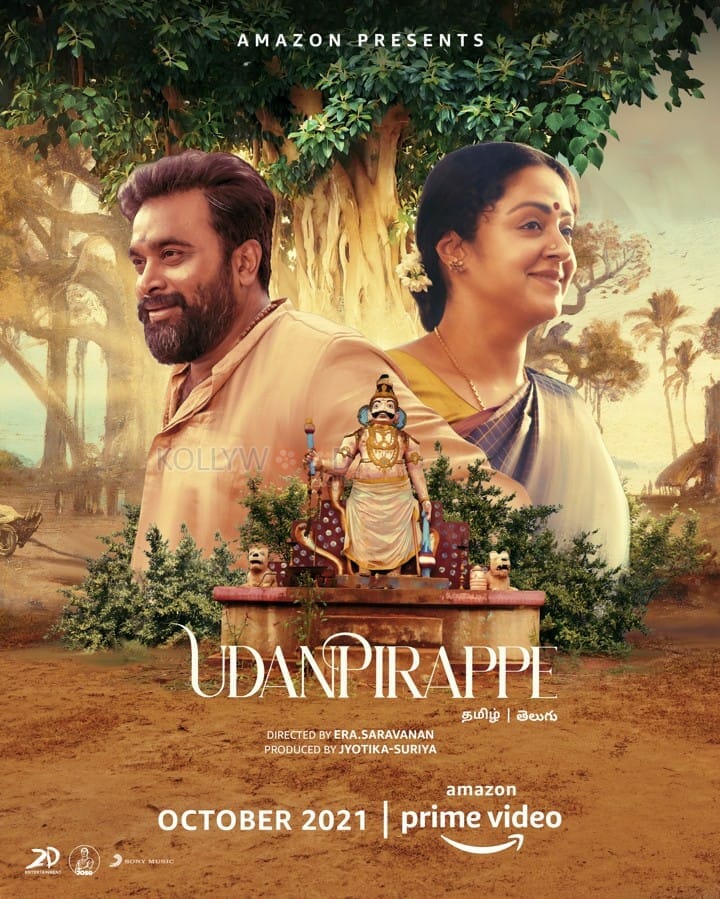 The film revolves around Maathangi aka Chinaayi (Jyothika) and her family. Maathangi hails from an influential family in the village Vengaivasal. The people of her village revere her. Her brother Vairavan (Sasikumar) calls the shots in the village. Whenever someone tries to harm his people, you can see him skyrocketing them with his clenched fist. Both brother and sister love each other very much to the extent where they would do anything to see each other happy. When Udanpirappe opens we are shown a priest offering rites in a temple while being mournful about a missing idol. He thinks it might bring bad luck to the village. Following it, we see a group of girls animatedly searching for Maathangi who has apparently gone missing. The camera focus on a nearby pond. We see liquid bubbles on the surface. Yep, you got it right. That is the intro scene of Maathangi. She comes out of the water with the missing deity. The villagers are both shocked and relieved. There is a sense of reverence for Maathangi in their eyes. As if they have seen the goddess herself.

As the flick proceeds, we get to see why people have such veneration on Maathangi. When people approach her with a problem, she would never turn them down. If pawning her Mangal sutra would save a life, she would do it without any second thoughts. Vairavan on the other hand, as Maathangi puts it, is an Ayyanar who guards a village. He is someone who does not see any sense in being diplomatic. This behavior of his does not go well with his brother-in-law Sargunam (Samuthirakani), a law-abiding school teacher. They often clash over their ideological difference. In unfortunate turn of events, Vairavan’s action leads to an irrevocable loss and it creates a rift between Vairavan and Sargunam. Fifteen years have passed away, but still the brother and sister are not in speaking terms. Will Maathangi’s prayers to reconcile her brother and husband be answered, is what makes the rest of the drama.

Sentiments have a huge place in Tamil cinema. More importantly it pays off well even if the plot is just average. The mother-son, father-daughter, and brother-sister sentiments have ensured high yields in the past. In Udanpirappe, Director Era. Saravanan has opted to go with the brother-sister sentiment angle. The best part about Udanpirappe is there are portions where it makes effort to break stereotypes. For instance, the highly held Mangal sutra sentiment, there is a scene where Maathangi pawns her Mangal sutra to raise money for the medical expenses of a needy. In a scene when a relative asks for her daughters’ hand in marriage, she coolly replies that is for her daughter to decide. These portions look good as individual scenes but on a holistic view they all seem to be forced in to the plot that follows the rural template of Tamil cinema to the T.

The intent here is to make a film about family, for the families. But what we get is a couple of hours mash up of scenes from popular relationship dramas. Story teller Era. Saravanan has not packed anything new from the regular cliches that we are so used to. Even his characterization is not good enough to make us root for his characters. Another big issue with the flick is, the chemistry between the characters do not gel well. They seem forced. With such a power house of performers director Era. Saravanan could have easily achieved what he envisioned. Unfortunately, he does not, and lacks the writing prowess to do so.

In her second innings, actress Jyothika has been very careful with the choice of roles she essays. She does not want to be in the typical heroine template anymore. If you put the characters that she has essayed ever since her comeback in chronological order, you will find a contrasting difference between them. It is the case even in Udanpirappe. She has done justice to the role she plays. It is the writing that does not support her performance. Actor Sasikumar fits inch perfectly in to his role. It is everything that we would get in Sasikumar’s trademark character. Nobody could have portrayed Sargunam as well as Samuthirakani. He is tailor made for a role such as this. Comedian Soori offers relief here and there but most of his jokes do not land. The rest of the cast has delivered a decent performance.

On the technical front, music director D. Imman’s tracks are obviously not up to his standards. But his background score is emotive and helps in lifting the mood. Cinematographer R. Velraj has captured the drama from the best angles possible. Editor Ruben’s work has letdown the flick. There are a handful of editing errors which we generally do not see in his editing.

On the whole, Udanpirappe is the epitome of rural dramas that has been cooked in Tamil cinema over the decades and has nothing refreshing to offer beyond that.