If we are to define Samuthirakani’s films with a bunch of adjectives, it would be, preachy, moralistic, rebellious, sentimental. Almost these four words could easily give away what is packed inside a drama that Samuthirakani presents. There is a widely regarded criticism over his sanctimonious nature of entertainers. In Vithodhaya Sitham, Samuthirakani takes up the challenge and tries to give a different color to the ‘Samuthirakani brand’ with the help of his go-to artist Thambi Ramaiah. The actor who was last seen as R. M. Veerappan in Thalaivii last month has yet another release this month. This time as a director in the likes of Vithodhaya Sitham. His recent directorial ventures have not turned out profitable. Will Vithodhaya Sitham help him rewrite the commercial success charts? To know that let us get in to the movie review. 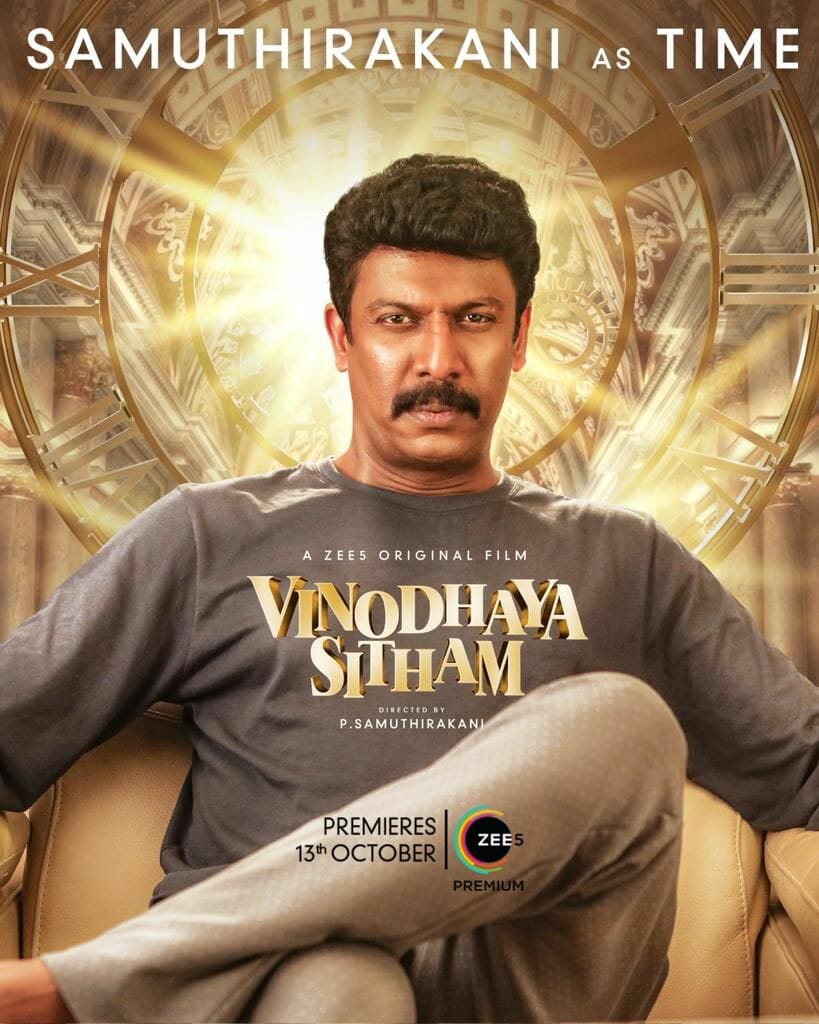 Vithodhaya Sitham revolves around Parasuram (Thambi Ramaiah) and his family. Parasuram lives with his wife Eswari (Sriranjini) and his two daughters Veena (Sanchita Shetty) and Gayathri. His son Arun (Deepak) works a job in US. Parasuram cares for the well-being of his family members. But he over does it to the point where he decides what is best for his family members. This egoistical and dominant side of Parasuram robs the family members of their freedom to make decisions of their own. When his son wants to swift to a different company, he makes him to be in the same job he hates. He makes arrangement to marry off his daughter to the son of his close friend Kicha (Munishkanth). When his younger daughter asks for his permission to study in abroad, he makes her quit her dream. He is so arrogant that he does not even realize how his actions are making life difficult for them. Instead, he thinks the world revolves around him, and that it is him who takes care of people.

Just when he is waiting for a promotion, things take an abrupt turn and Parasuram pass away. He could not accept his death. Not because he is worried that he could not experience life anymore but for his demise without completing the things that he has worked so far in his life. He begs to Time (Samuthirakani) to extend his validity on earth to 90 further days. Time grants his wish. He comes to earth only to realize that the world goes on even in his absence. Things go on smoothly at his workplace, the day-to-day activities in his family go on. How these 90 days are going to be for Parasuram, will his perspective about life change, is what makes the rest of the flick.

Samuthirakani’s characters, the one he writes or the one he depicts, often have rebelliousness as its essence along with high moral compass. He has made amends to the regular approach of his in Vithodhaya Sitham. That is not to say that Vithodhaya Sitham is not packed with a message. Of course, it is. But the way in which it is packed is unlike to what we are used to with Samuthirakani’s films. There is message in the drama but he has tried to play it subtle. This sort of approach has worked well but as the flick proceeds the typical Samuthirakani comes out of the closet. When he does, the film inclines towards the melodramatic tone.

The first half of the flick moves on humorous roller wheels, while the second half travel more in a melodramatic tone. In general, the message that Samuthirakani wants to deliver through his movies never fall in to the questionable zone. The same cannot be said for the one he intends to deliver in Vithodhaya Sitham. The film constantly tries to push through the message that our lives are preordained and we are merely actors on the stage. If that is the case in point, Parasuram realizing that he has made mistakes and attempting to correct them do not make sense. Because how is he supposed to change something that is predestined?

Actor Thambi Ramaiah is one of the most underrated artists of Tamil cinema. The man’s filmography speaks for itself. In Vithodhaya Sitham he has delivered an entertaining performance and showcases his acting prowess in the emotional portions. He carries the flick on his shoulders effortlessly. Samuthirakani as an actor essays a refreshing role in Vithodhaya Sitham. A role that he has not played in his career up until now. Another underrated actor is Munishkanth. His expressions and timing are impeccable. Someone give him a damn award already. Actress Sanchita Shetty does not have much to contribute to the plot but is adequate for her role. Actor Jayaprakash makes his presence felt. Actress Sriranjini scores well as usual. Actors Deepak, Balaji Mohan, and Harikrishna have all played their part well. The rest of the cast has delivered what was asked of them.

On the technical front, music director C Sathya’s tracks do not stand in our memory for a long time. But he shines with his background score. Cinematographer Ekambaram has covered the flick in the best way possible. Editor Ramesh upkeeps the work of his colleague with his sharp trims.

On the whole, Vithodhaya Sitham, the first product after director Samuthirakani’s derailment from his regular film making style is entertaining to an extent.