Finally, Sangathamizhan has hit the screens after voyaging through almost half a year of financial mess which the production house had to endure even on its opening day resulting in few show cancellations. But even after all these hard fought battles the answer to the question, is the movie worth the wait, will still be not a solid yes. Director Vijay Chandar who is known for his mass films Vaalu, and Sketch have further upped the mass quotient in Sangathamizhan. The mass action entertainer lacks the very core artistic nature of a Vijay Sethupathi’s film which catapulted him to the success that he is currently basking on. Off course he has previously done films under the mass category like Sethupathi or Vikram Vedha. But unlike these flicks Sangathamizhan has got in to the mass hero worshiping trend of Tamil cinema way too much which obviously has made the flick excessively loud even at normal moments. 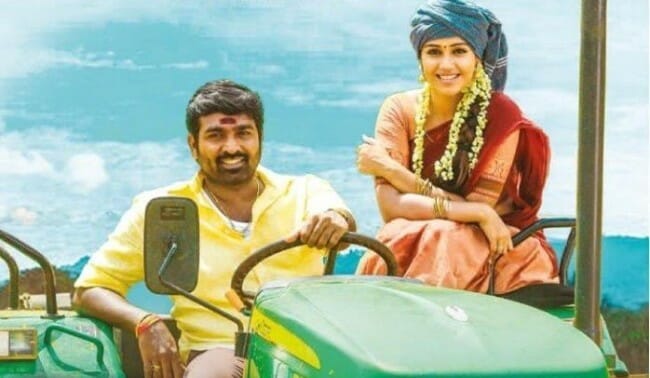 Murugan (Vijay Sethupathi) is a carefree youngster with dreams to become a film actor. He lives in North Chennai with his sidekick (Soori). And what do jobless mass heroes of Tamil cinema do? You guessed it right. They are behind a young beautiful woman with less intellect. Here Murugan employs a handful of clichéd heroine impressing methods that are already done to death in Tamil cinema and gets the attention of Kamalini (Raashi Khanna), the daughter of leading industrialist Sanjay (Ravi Kishan). Naturally, this love story does not incite a good reaction in the industrialist father and he plans to get rid of Murugan from his daughter’s life. But he changes his mind and sketches an even more devious plan when he learns that the appearance of Murugan is same as Tamizh, a leader of a local village in Theni who put an end to his plan of setting up a copper factory in the village.

There is a major twist in the tale but that is not enough to save a 150-minute motion picture. And does not make any difference in the end on the way we feel about the flick. Knowing the core plot – fight against a copper factory being set up in a village where the prime occupation is farming – one may wonder, where is the necessity for two female leads and mass punch lines in such a storyline. But then, you know the clichéd answer the film makers of Tamil cinema give you: commercial elements. God knows, when Kollywood is going to get rid of these sick mass entertainers.

The saddest part with Sangathamizhan is that it is just the opposite of what Vijay Sethupathi is known for. Apart from being too loud for a Vijay Sethupathi’s film there are numerous plot holes and over dramatic scenes in the film which the audiences are very tired of after witnessing them over and over again for the past two decades. What is it with the mass genre and the actors who have crossed 15 or 20 film mark in Kollywood? Just when cinema lovers in the state have started to think that Vijay Sethupathi is swimming against the commercial tides of Tamil cinema, Sangathamizhan comes in as an indicator that he too has been dragged along with the commercial current.

Actor Vijay Sethupathi as usual in his own style of portraying a character has delivered his best. But the lack of depth in the characterization makes it difficult for us to pin with his character. Actress Raashi Khanna and Nivetha Pethuraj have been merely used for the commercial reasons. And their characters do not influence the core plot in any way. Comedian Soori seems to be running down on his comedy stock. All his recent flicks have suggested only that. Villains Ashutosh Rana and Ravi Kishan does not pose threat in a way that powerful antagonist should and instead are just waiting to be slaughtered by the lead hero. The rest of the cast has delivered an average performance.

On the technical front, cinematographer R. Velraj has done a decent job. While musical duo Vivek & Mervin, have served their purpose for being on board by providing the director what he wanted: loud background scores in other words mass background scores.

On the whole, if you are an aficionado of Vijay Sethupathi for his cult films, then Sangathamizhan might be a tough watch for you.