Actor Vikram Prabhu is back on screens after his family drama Vaanam Kottatum with his action heist thriller Asuraguru. Vikram Prabhu is one of very few artists of Tamil cinema who choose their scripts with clear vision. But sometimes even the best are prone to make a blender. With Asuraguru Vikram Prabhu has made that blender. Though, his previous entertainers such as Sigaram Thodu, Arima Nambi, Ivan Veramathiri did not shine much in the box office, they garnered decent reviews from the critics for their fresh content and passable screenplay. Asuraguru lacks both. Debutant director Raajdheep has took inspiration from the infamous heist crime that took place on a running train in Tamilnadu few years back and has added few heists sequences from multiple films to his flick. But is that worth enough to keep the audience hooked? Let us get in to the review. 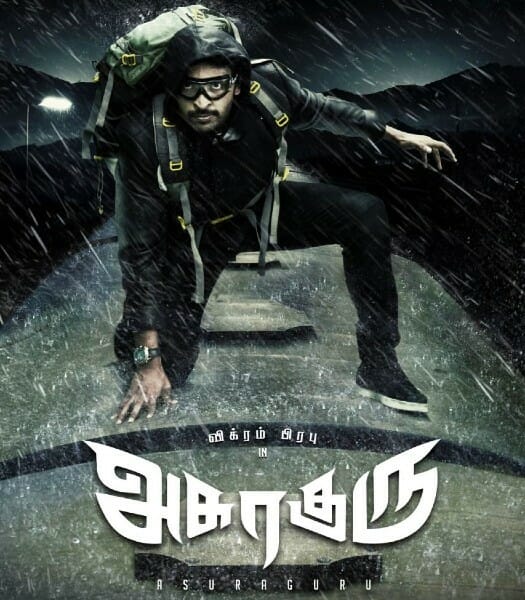 Asuraguru opens with a young man who jumps off a bridge on to the top of a moving train without any panic and maintains his cool. He then cuts open the roof of the train without much labor and gets in to the coach to walk away with a huge amount of money. Naturally, an investigation is opened on the case and an efficient police officer Manickavasagam (Subbaraju) is appointed to handle the case. Meanwhile, we get to know that the young man is Shakthi (Vikram Prabhu) who works as a courier delivery guy to put on a decent front in the society. But shrewdly concoct plans to rob from criminals who accumulate money in a wrong way. He prefers brain over brawn and crafts his plans with the aid of modern technologies. While the cops are still clueless in the train robbery case Shakthi devices another plan to carry out his next robbery.

This time his target is the son of a hawala operator named Jamaaludheen (Nagineedu). He deploys the assistance of technology and successfully loots a lump sum amount of money from a moving car. Not willing to approach the cops Jamaaludheen makes his own move to get back his money by approaching a detective agency to nab the individual behind the loot. The agency allocates the case to Diya (Mahima Nambiar) who is connected to Shakthi through a mutual friend. Despite a cop and an undercover agent tailing behind him Shakthi orchestrates another robbery successfully. With this heist Manickavasagam figures out that the information about the moment of huge amount of money is leaked from his department. So he sets up a trap for Shakthi by intentionally leaking information about a huge money transfer to a bank.

In the meanwhile, Diya cracks the case which leads her to Shakthi. She goes to Shakthi’s place to confront him but finds that he is not in home. She waits for him and when he arrives she attacks him. Then we are up for a flashback portion where Diya learns a truth about Shakthi. Will the truth silence Diya and make her to aid Shakthi, why is Shakthi involved in these sort of high profile robberies, what did he do with all the money that he managed to steal, is what makes the rest of the flick.

Director Raajdheep seems to have taken a lot of inspiration from western heist thriller movies to craft his script. High octane action sequences with cars and sports bike chase, in depth planning of the heist, the cat and mouse chase between the gang and the cops, and unanticipated twist in the tale, is what makes a heist thriller engaging. Story teller Raajdheep has got all that in to his mind well but bends them to his own comfort level and allotted budget which leaves a huge dent in the way the flick is presented to the audience. When there is a budget constraint that is where the prowess of a film maker comes in, to keep the drama entertaining within the budget. But director Raajdheep gets ambitious and wants to have highly dramatic sequences in a bootstrap budget, thus, pushing the entertainer in to a mediocre making.

The flick starts off as an unapologetic heist thriller but towards the end the justification happens as to why the lead hero did what he did. That is when the must have – the lead hero suffering from a disorder sentiment of recent Tamil cinema – kicks in. The issue with Asuraguru is that it starts off as a heist thriller but half way through it gets clueless as to what it wants to achieve and proceeds loosely towards the end. In addition to this the weak characterization of almost all characters that appear in the movie makes it hard for the audience to connect with the entertainer. A supposed to be a twist portion at the very late part of the drama does not help the flick either.

Actor Vikram Prabhu has delivered what was asked of him in the best possible way. Actress Mahima Nambiar finds it hard to settle in, in the only potential character of the flick. Actors Yogi Babu and Jagan disappoints with their lackluster comedies.

On the technical front, musicians Ganesh Raghavendra, and Simon K. King have done their best. While cinematographer Ramalingam’s frames are middling which the editor Lawrence Kishore has tried hard to cover up.

On the whole, Asuraguru is a want to be western film kind of heist thriller but its own writing and making totally obliterates its aspiration.