Tamil heroes always prefer to put themselves in the good vs. bad fight in which they will slay the bad to save the people. With such a preference Tamil cinema should have had tons of deep political dramas. But if you look for proper political flicks in Tamil cinema you would only have a handful of them. And even less films with communism ideology. And even less flicks with good knowledge and clever arguments about the ideology. The last film based on communism philosophy was film maker Raju Murugan’s Gypsy which hit the screens last year. This year director Manimaran’s Sangathalaivan clocks to be the first communist flick. Film maker Vetrimaran has bankrolled the project. When someone of his caliber launches a movie it does gets certain weightage. So what has Sangathalaivan got in stores for us? To know let us get in to the movie review. 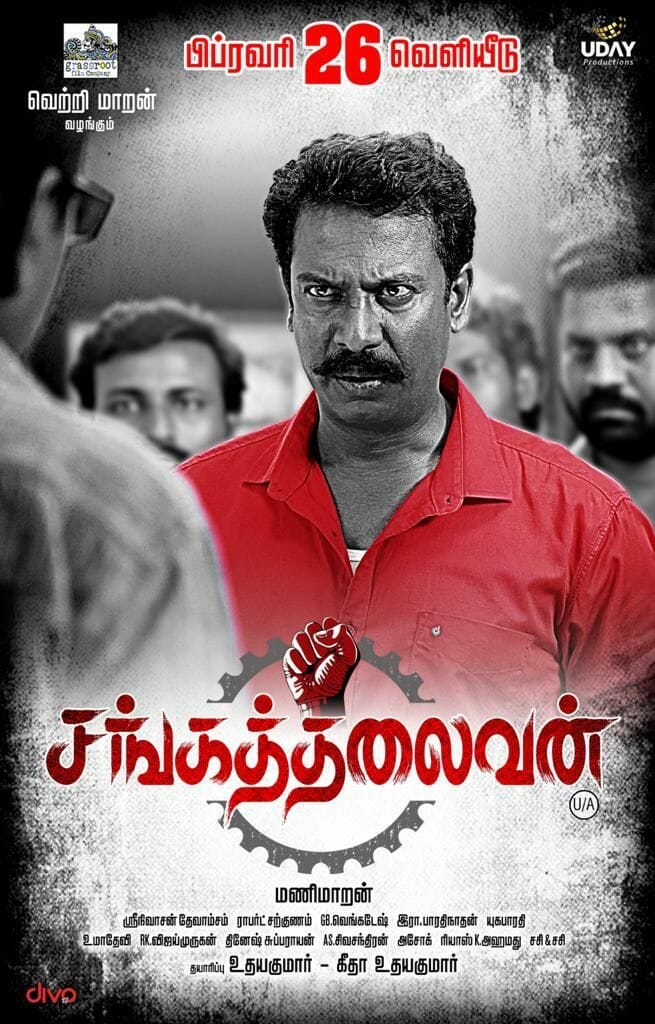 The entertainer follows the life of Rangan (Karunas). Rangan is an innocent man who has left his house due to family issues. He works in a power loom factory run by a covetous boss Govindaraj (Marimuthu). Rangan always likes to play things safe and does not even believe in protesting. On the other hand we have Sangathalaivan of the local workers union Sivalingam (Samuthirakani), who does not think twice to put himself against authority when he finds injustice being unleashed on poor workers. He has acquired the wrath of many employers as he works against them in securing the labors interests. Innocent Rangan’s life alters when his colleague loses her hand in a horrendous accident inside the factory. Seeing the way his colleague is treated Rangan decides to approach Sivalingam. He speaks about the incident with Sivalingam and requests him to ensure that his colleague gets a reasonable financial settlement. He also asks him to keep his name out of the issue.

Sivalingam successfully makes Govindaraj pay the compensation. Raged Govindaraj swears to take revenge. This changes the view of Rangan about communism. Gradually, he develops an interest on communism and at one point associates himself with the union. Once a man who hated the ideology, accepts it and not just stopping there he commits himself to it seriously. Rangan becomes busy with his work and union responsibilities. Meanwhile, he comes to know that his colleague (Sunu Lakshmi) is in love with him. He also falls for her. Just when everything begins to get smooth in life, Sivalingam is imprisoned under goondas act. This forces Rangan to take up the place of Sivalingam and organize a protest. Will Rangan bravely take up the responsibility and lead the protest, Will he end up with his love, and what happens to Sivalingam is what makes the rest of the flick.

Generally, political films based on ideologies mainly suffer because of the story teller’s half knowledge about the very ideology that he wants to discuss. Director Manimaran is not such a kind. He knows what he is doing and is clear about what he wants to convey to the audience. He has built a right plot to explore his ideology effectively. He has brilliantly depicted the painful lives of workers in the power loom factory. His ability to write human emotions has come in handy. Some of the dialogues in the drama are racer sharp and helps in adding vigor to the social commentary. The transformation of Rangan from a non communist to a communist is neatly written. It is the biggest scoring point of the movie. Credit to him to bring together a strong casting unit to powerfully deliver what he wanted to deliver.

On the down side, story teller Manimaran could not desist from being preachy from time to time. He could have avoided the mass factor that is troubling Tamil cinema to a greater extent and sketched his characters as normal ordinary persons. As the film takes its political message seriously, having dramatic sequences makes it difficult to relate with them. Also, every complex issue in the work space is solved just like that when Sivalingam enters the scene. Despite being able to credibly portray the painful struggles of layman when fighting for his rights and justice, the solution it attempts to deliver for the issues are not convincing. If director Manimaran had worked to offer practical solutions, Sivalingam could have been much effective.

Who else can portray a fiery political leader’s role so well in Tamil cinema, If not Samuthirakani. He has a trademark right for roles such as this. He cakewalks his character and makes his presence felt. The surprise package in the film is actor Karunas. He has been handed over a meaty and scopeful role. He is the hero of the flick. He has dealt the changeover from an innocent layman to a responsible leader quite effectively. Actress Ramya Subramanian has short screen time but shines in her performance. Actress Sunu Lakshmi is effective and has delivered an impressive performance. Actor G. Marimuthu is fitting for the role of a greedy businessman. The rest of the cast has delivered a decent performance.

On the technical front, music director Robert Sargunam’s political tracks and background scores has added strength to the flick. Cinematographer Srinivas Devamsam’s frames have covered the social drama effectively. Editor Venkatesh could have been slightly better with his cuts.

On the whole, Sangathalaivan is an average socio political entertainer when watched with an open mind.