Director Ananda Krishnan garnered the attention of Tamil audience with his debut venture Metro. The thriller drama was based on the chain snatching gangs, that made for an interesting premise. For his sophomore flick, the story teller has chosen to go with the most loved genre of Tamil film makers, ‘the mass action genre’. Actor Vijay Antony did not have a single release for the past 18 months. He was last seen in the action thriller Kolaigaran. After a long gap he is finally back on screens with his latest political mass action flick Kodiyil Oruvan. The musician turned actor has not had a solid commercial success since Yaman. Is Kodiyil Oruvan solid enough to put actor Vijay Antony back on the winning horse? To know that let us get in to the movie review. 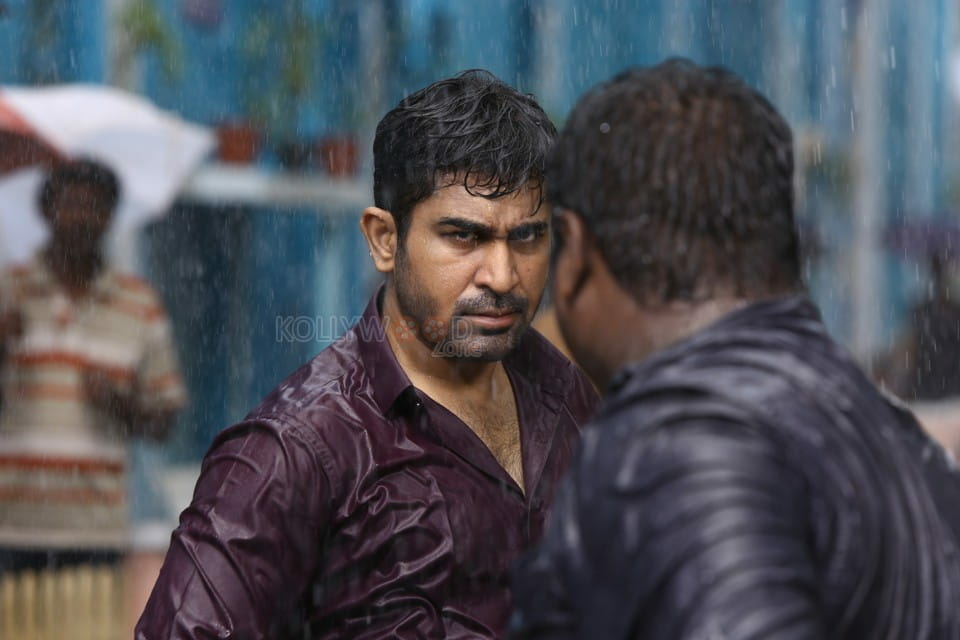 Kodiyil Oruvan follows the life of Vijayaraghavan (Vijay Antony). The flick opens in Kombai where the heat of local body election radiates in the town. A local thug (Poo Ramu) is on a hunt for a proxy woman candidate to contest in a ward that is reserved for women. He finds his candidate in a woman (Divya Prabha) who is popular in the locality. The woman contest in the election and win it. But to the shock of the thug, she begins to operate on her own. While the thug wants to hoard money through corruption, she genuinely works to better people’s life. Her measures have a good reception among the people. This does not incite a good reaction in the thug. At one point he decides to take her out. Fortunately, she manages to escape the attack, but unfortunately lose her husband. Shortly afterwards, she gives birth to Vijayaraghavan. The injustice done to her leaves a deep mark in her. Hence, she decides to turn her son in to an honest IAS officer to server people.

To fulfil his mother’s wish Vijayaraghavan shifts to Chennai to prepare for the IAS exam. He takes lodging in a near-the-state-of-ruins housing board. The place is a garbage. And the teenagers in the locality are exploited by the politicians to carry out their criminal activities. How can a Tamil hero stand this injustice laid on people, right? Naturally, Vijayaraghavan starts from cleaning the garbage that’s everywhere in the locality and moves to educating the teenagers. Eventually, just like his mother, he earns the wrath of the local councilor (Super Subbarayan) and his party men. Vijayaraghavan continues with his good deeds which put him in the attention of the councilor’s head Bedda Perumal (Ramachandra Raju). Vijayaraghavan clears his IAS exam but when he is about to attend his final interview, he is attacked brutally by the Bedda Perumal’s gang.

Enraged Vijayaraghavan, fights back. He unites the people of the slum, contest in the local body election, and become the councilor of the ward. He implements innovative measures to lessen people’s burden and provide them with proper basic facilitates. In short, he shapes his ward to be the best in the state. This further infuriates Bedda Perumal and he goes after Vijayaraghavan’s family to stop him. Will Vijayaraghavan outdo Bedda Perumal and save his family, is what makes the rest of the flick.

Actor Vijay Antony is one of a very small group of actors who choose their films well. But of late, almost all of actor Vijay Antony’s films are made on a formula. An opening song + quite & sympathetic guy + injustice unleased on him or on his dear ones + sentiment (mother or father or sister or a friend) + a love track + action sequences = voila! Vijay Antony’s film. This is easily the formula of most Tamil films but it is actor Vijay Antony who has been so sincere to it. It seems like as if the actor specifically sees to that his scripts are derived from this formula. Any deviation from it is nullified. Kodiyil Oruvan is not any different from this approach. What is surprising is that using the same formula the actor has managed to enjoy a decent success. Guess, it is one of those things we cannot wrap our heads around.

After the much raved about mother-son sentiment in Pichaikaran, Vijay Antony resorts to it again in Kodiyil Oruvan. Director Ananda Krishnan’s debut film Metro worked well because of the out of the box thinking. But for some reasons he has ditched that approach of writing a script and has tried to walk on the path that has traces of countless footprints. Perhaps, a pressure from actor Vijay Antony to do so?

Actor Vijay Antony plays it inside his comfort zone. He has got so good at it that he pulls off his character effortlessly. Actress Aathmika exist just so a Tamil film cannot be without a female lead. The presence of the actress adds nothing other than a glam show. Actor Ramachandra Raju is menacing with his physique and appearance, but his characterization is not done to his strengths. He has been assigned with the same tasks that we get to see the antagonists of Tamil cinema perform. The rest of the cast has delivered an average performance.

On the technical front, music director Nivas K Prasanna’s scores do not stay in our attention for long time. Cinematographer N. S. Udhaya Kumar’s frames are adequate for the flick. Surprisingly actor Vijay Antony has not composed the music for the drama but has edited it. He has done a pretty decent job at it.

On the whole, if you had enjoyed the mass action entertainers of Vijay Antony than Kodiyil Oruvan might be your cup of tea, if not you can easily miss it without second thoughts.