Andrew Louis has delivered a solid and well executed thriller that keeps you hooked till the very end.  On the whole, Kolaigaran turns out to be a solid thriller which could be a perfect entertainer worth catching up in theaters this weekend.

Vijay Antony after facing pitfalls with his recent flicks has turned to the genre which suits him well and of course which introduced him to the Tamil audience. The actor, as he intended, the strategic move has worked in favor of him as the whodunit crime thriller ticks almost all the boxes that are necessary to be an edge of the seat thriller. Also, the transcendent performance from the action king of Tamil cinema Arjun Sarja has added to the flavors of the film. 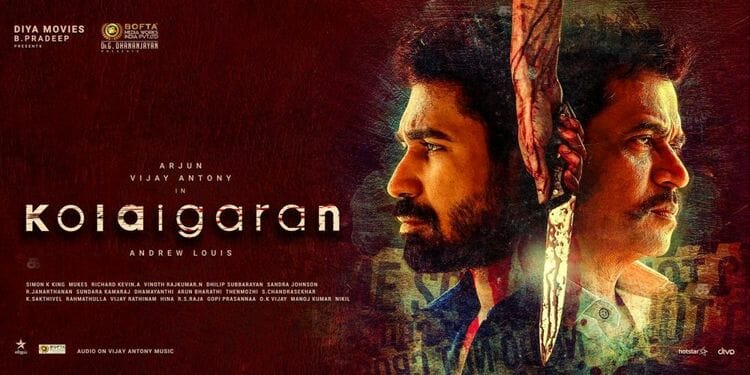 The very first frame of the film hooks you in to the plot where you get to witness a young girl being murdered gruesomely. Then we get to witness a confession of Prabhakaran (Vijay Antony) who claims to have committed the murder. DCP Karthikeyan (Arjun Sarja) a top police official who listens to the confession is not convinced that the confessor is the killer. So he decides to dig deep in to the case. But just before the confession we witness another murder this time the victim happens to be a man. DCP Karthikeyan is assigned to solve the murder of the unidentified male. Later he finds the victim’s name is Vamsi, who happens to be the younger brother of an influential minister which put him under pressure to solve the case at the earliest. The movie then cuts to an apartment where Prabhakaran lives right opposite to his neighbor Dharani (Ashima Narwal), on whom he has a soft corner. Though they do not talk much to each other they just exchange pleasantries when they bump in to each other. Dharani who lives with her mother (Seetha) is stalked by Vamsi, in order to escape from him Dharani and her mother flees to Chennai.

During the investigation Karthikeyan learns this and suspects that the mother and daughter have something to do with the murder of Vamsi. Karthikeyan also finds out that Prabhakaran is not an ordinary man but an intellectual ex IPS officer in Hyderabad who is known for solving some complex crime cases. Now what initially looked like a simple and straight case becomes a complex mystery riddle. Who was the master mind behind the murder, who executed the murder, did Prabhakaran help Dharani and her mother, if so why did he do it, is what makes the rest of the gripping movie.

Vijay Antony is back to his non-expression look which is fitting for the Prabhakaran role that he has essayed in the flick. The saying ‘Success is 70 percent based on the planning and brain work’ is 100 percent pertinent for the actor who seems to very well know what he is good at and picks his projects accordingly. Kolaigaran is sure to go down in to the list of successful films that the actor has delivered.

Arjun Sarja, people with experience does not only pull of complex tasks with easy but they make it look simple. The action king is the recent living example for that, who has put on a sublime performance in the film as an superior investigating officer. The rest of the cast has given what was asked of them and has justified the reason for being brought on board for the venture.

Director Andrew Louis just minutes before the screening of the show acknowledged that his project is inspired from the popular Japanese novel The Devotion of Suspect X. Not only the writer deserves to be praised for his act of being genuine but also for his more or less inch perfect screenplay and his creativity to have weaved changes to the plot that are admirable.

On the whole, Kolaigaran turns out to be a solid thriller which could be a perfect entertainer worth catching up in theaters this weekend.