On behalf of Kothandapani Films M. Senthil Kumar has produced the movie which was written and directed by P. S. Ramnath. The movie features Jiiva, Nayanthara in predominant roles and earlier the pair have acted together in “E” which was released ten years back. Srikanth Deva is the music director for Thirunaal. He has given few melodious hit songs and the background scores were also amazing. 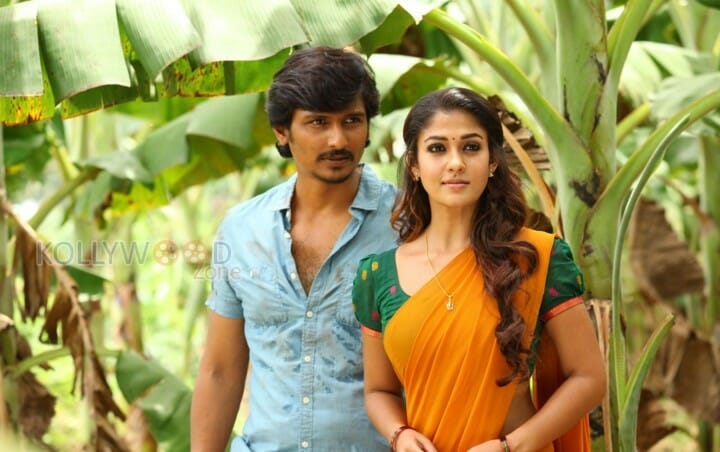 Mahesh Muthuswamy has made the beautiful cinematography and was edited by V.T. Vijayan and T.S. Jay. The movie is based on village story with romance and action in equal part. In the movie Jiiva plays the role of Blade Ganesh and Nayanthara as Vidhya. Actors like Vijay TV Fame “Neeya Naana” anchor Gopinath, Sharat Lohitshwa, Meenakshi, Karunas, Joe Malloori, Jayapalan, Ramachandran Durairaj are playing the supporting roles.

The movie was given U/A Certificate by the Censor Board. Jiiva plays the role of a village guy with blade in his mouth and colored lungi. Nayanthara had posed as a kinder garden teacher and Jiiva falls in love with the teacher and has to undergo many circumstances after changing as a real hero. The story moves in such a way that the hero faces and tackles all the problems and joins hands with Nayanthara.

Nayanthara and Jiiva pair has worked very well. The songs are melodious to hear and “Palaya soru pachamulagai, pakkathu veettu kolambu vaasam” song was superb. Nayanthara has looked beautiful in her homely attire. Her costume has added more glamour to her beauty. Karunas comedy track will make you reduce the BP and the movie is an emotional story with a message that crime does not pay you.

Jiiva’s performance is lovely and his anger in many scenes is shown greatly. A good village oriented movie which should be watched to see our traditional culture starts from Village areas. Jiiva’s fans will have a great treat to watch their star in village style after a long time.

Overall, ‘Thirunaal’ is not bringing the ‘Festive’ mood!