Yep, Tamil cinema is fighting hard to break free from the decades long carnage that happened in the name of commercial film making. Even the audience seems to be backing this rebellion. If this is not true, an entertainer like Oh My Dog could not have been possible in Tamil cinema. The film covers the emotional connection between a school kid and a blind Siberian Husky. Actor Arun Vijay who was last seen in Mafia: Chapter 1 is back on screens with the child drama Oh My God. Actress Mahima Nambiar has played the female lead. Director Sarov Shanmugam has helmed the movie. So, how has the flick come out? Is it refreshing enough to be a memorable film in actor Arun Vijay’s career? To know that let us get into the movie review. 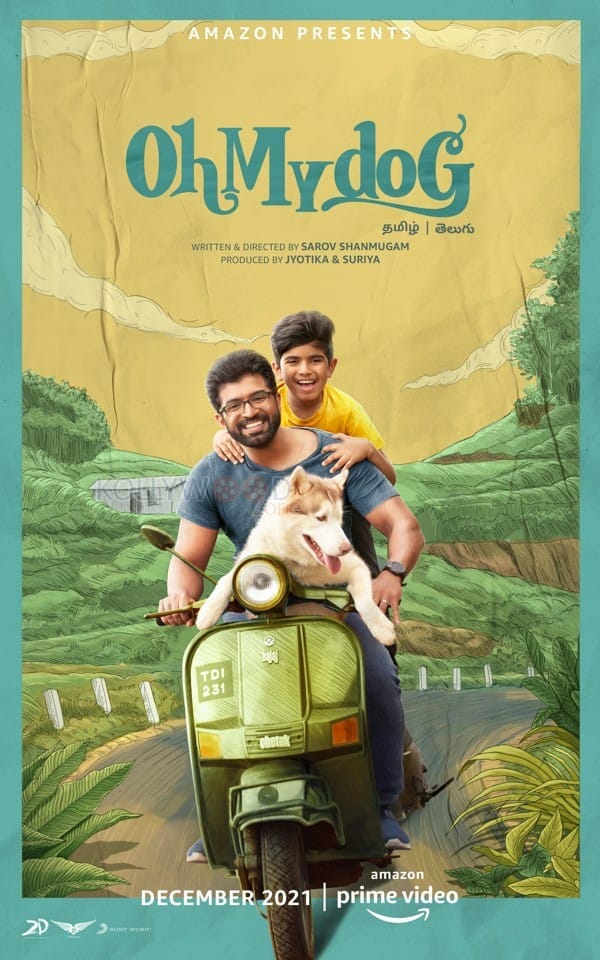 Oh My Dog follows the life of a kid named Arjun (Arnav Vijay). He lives with his father Shankar (Arun Vijay), and mother (Mahima Nambiar). When Oh My Dog opens, we are told about a fanatic dog owner Fernando (Vinay Rai), who only trains high quality breed dogs and lists them to take part in international dog shows. He has been consistently winning the dog shows and has a reputation in the business. To keep winning the show has become a matter of pride for him. One of his Siberian Husky gives birth. Fernando recognizes that one of the pups has been born blind. So, he decides to kill it. And hands over the job to his men. Fortunately, the dog escapes. In order to dodge the wrath of their boss, the men report back to him that they have killed it. One fine day in Ooty, Arjun finds the pup and decides to keep it as his secret friend. He is not aware of the fact that it is blind.

In one instant, Arjun takes the pup to the school to introduce it to his friends. Accidentally, Fernando’s men notice the pup and begin their pursuit of it. Arjun introduces the pup to his friends as Simba, and requests them to keep it a secret. We all know how a secret is kept in school, right? So, soon the entire class comes to know of the secret. Eventually, it gets to the physical trainer (Swaminathan) of the school who takes the matter to the principal (Priyadarshini Rajkumar). Arjun takes the pup home and cares for it. When he learns about the dog competition, he wants Simba to take part in it. So, along with his father he begins to train it. He convinces his father to get eye surgery for Simba and lists him in the competition. Yep, Simba makes it to the finals setting up the stage for the final big act. Will Simba win the competition beating all odds, is what makes the rest of the flick.

Director Sarov Shanmugam seems to be a big fan of American dog films that were a drift back in the 90’s. There are a lot of similarities to them in Oh My God. Of course, he does give the script his own spin but it is not enough to get the adult audience on board. If Oh My Dog is viewed merely as a child drama which seems to be the intention of the film maker, it does have substance to hold the attention of the kids. For instance, the initial portions introducing Fernando where he tries to come across as a funny don, portions where Arjun shows the dog to his friends and how the secret spreads to the whole crowd, are all funny. Story teller Sarov Shanmugam uses the child dog bonding as a metaphor to drive home a vital message that every being has their right to survive despite their deficiencies, and with right love and care they would do a lot better.

The heart is at the right place for director Sarov Shanmugam. But his craft is not sufficiently sharp to effectively dispatch the message. Oh My God takes an utterly predictable route to get to the end which is the climax of all sport-based films. Even the characters and their behaviors are things that we are so accustomed to. Even if it is a child drama, why not have a basic level of logic and reason? Also, the scale of emotions that the film maker desires to draw out in the poignant moments between the boy and the dog has not been achieved as desired. Perhaps, if he had deployed the assistance of VFX along with a little fine tuning of the script, Oh My God could have offered the audience of all age groups a pleasant cinematic experience.

Child artist Arnav Vijay has delivered a remarkable performance. Seems like he will do a round in the industry. Actor Arun Vijay is fitting as a father. He just glides through his role smoothly. Needless to say, their chemistry is vivid. Actress Mahima Nambiar has done justice to her part. Actor Vinay Rai comes across as an unharmful evil character. Though it is a role with confined screen time to hardly make any impression, still he could have done his part better. Veteran actor Vijayakumar is effective as usual. Actor Bhanu Chander is adequate. Actress Priyadarshini Rajkumar is functional. Comedians Swaminathan, and Manobala inconsistently provide us with comical relief. The rest of the cast has lived up to the purpose as to why they were brought on board.

On the technical front, music director Nivas K Prasanna’s tracks are sort of okayish. But he does add value to the flick with his well-tuned background score. Cinematographer Gopinath lets his visuals do all the talking. He has beautifully captured the fresh and tranquil nature of the hilly regions. Editor Meghanathan has put his scissors to fine use to emphasize the work of his partner.

On the whole, child artist Arnav Vijay’s Oh My God is a breath of fresh air in the industry with good intentions aimed exclusively at children that is bogged down by a few portions of ineffective writing.

Oh My Dog is available for streaming on Amazon Prime Video OTT platform.