Actor Prabhu Deva who has turned his attention to acting has yet again delivered a lackluster flick after his unnoticed movie Charlie Chaplin 2. Though the first version of the film Devi received mixed reviews, it did well at the box office. But all the good elements that were in Devi are either replaced or chopped off in Devi 2, courtesy to A.L. Vijay for lazy and illogical writing. 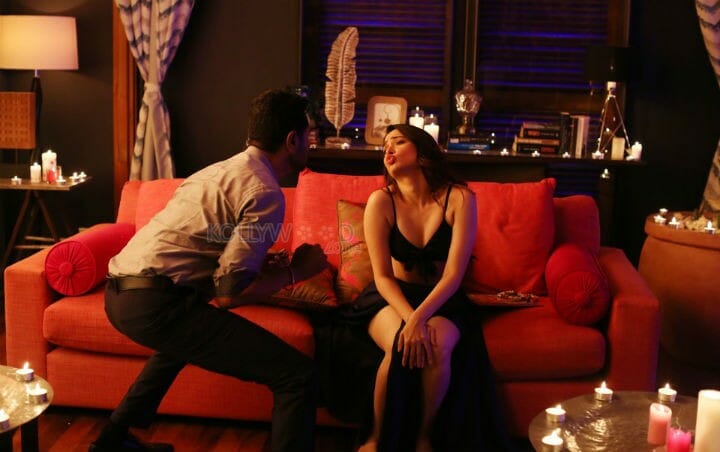 Krishna (Prabhu Deva) still habitats in the very same house where his spouse Devi (Tamannaah Bhatia) was possessed by the ghost of Ruby, an aspiring actress. It is kind of weird to stay in the same house after getting possessed by a ghost; if you feel the same way then Devi 2 is definitely not your cup of tea. You will have to keep your intellect ability in the off mode throughout the film at least to sit through the movie completely. As a plot development Krishna now has a three old daughter named Pooja.

Even after a couple of years, Krishna is still scared and claims that Ruby might again come back in to their lives. In order to stay away from Ruby he never steps out of his house or allow his wife to. In the belief that Ruby the ghost will upkeep the deal that she signed, that she will never concern their family when they are inside their house. So, – wait . . . ensure to put your intellect in off mode – he has not stepped out of his home for the past three years. Do you want to know how? He works from home and for food and groceries? He orders them online for home delivery.

In contrary to its prequel, Devi 2 has Krishna being possessed by not single but double ghosts. While in Devi it was Krishna’s role to keep the family together, in Devi 2 it is Devi’s task to keep the family together. The ghost that has possessed Prabhu Deva turns him in to a ladies’ man and suddenly girls begin to find him attractive. Devi finds it extremely difficult dealing with the ghosts in her husband’s body. Kovai Sarala comes in as a friend of Devi and assists her in dealing with the ghosts. Apart from this there is also a parallel sub plot involving Nandita Swetha and Dimple Hayati which makes us wonder, what impact does the sub plot make on the script. Why have the ghosts taken over the body of Krishna, what is the agenda of the ghosts, did Devi manage to get rid of the ghosts and keep her family together, is what makes the rest of the story.

Prabhu Deva as usual has pulled off his part very causally in his own style of calmness and modishness. Particularly, the scenes where he is possessed by the ghosts, he has portrayed them with great variations.

Tamannaah Bhatia comes as a surprise package to us as she puts on a stunning performance at many moments in the film and her expressions, either for the fear of ghost or while being in helpless situations, really adds flavors to the film. Definitely not to miss the ‘Read Ready’ song for which the Tamannaah’s fans where waiting, she sets the theater on fire with her seductive expressions.

Nandita Swetha and Dimple Hayati, seems to have been brought on board just for the purpose of skin show. Particularly, Nandita Swetha has upped the glamour quotient unlike any of her previous flicks. It is disheartening to see Kovai Sarala in the same role film after film where she keeps gabbing in fear of ghost which makes us tiresome. Instead of being a comical relief she further added to the miseries that the movie puts us through.

On the whole, a very average and illogical writing makes it difficult for us to sit through the film. Devi 2 seems like a film which is entirely cooked with cashing on the popularity of the prequel of it.