Crime thrillers are one of the best entertaining means that are there to kill our time. They become a double bonanza, when they work our brains out by dropping effective brain teasers at regular intervals. Director Mano Ve Kannathasan attempts to do the same with his directorial debut film Irudhi Pakkam. The film is about a character which knows its death through premonition and leaves a clue before being murdered for the police to nab the suspect. Actor Rajesh Balachandiran plays the lead role while actress Amrutha Srinivasan dons the female lead role. So, how has the murder mystery drama come out? Is it solid enough to garner the attention of audience? To know that let us get in to the movie review. 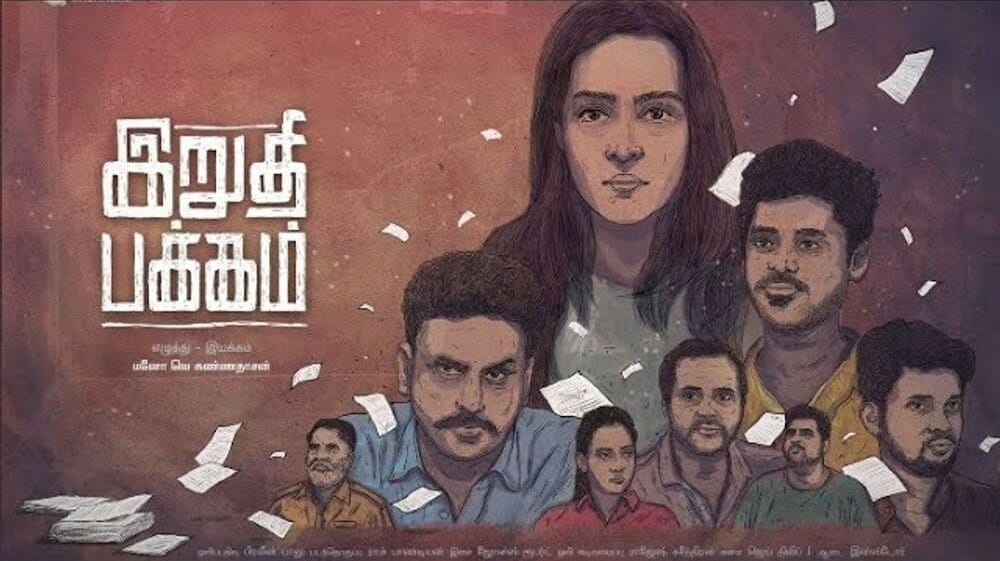 Irudhi Pakkam revolves around the events that follow the death of an independent young woman Iyal (Amrutha Srinivasan), an aspiring transgressive writer who lives alone in an apartment. Irudhi Pakkam opens to Iyal sadly penning a note about how a person makes her life difficult. Few minutes later she lets in a stranger inside her house who murders her. Kumar (Rajesh Balachandiran), the inspector of the locality begins to investigate the case. The enquiry is a no brainer and the killer is taken under custody in no time. He even confesses to the crime. Just when you begin to wonder, what, is that it? He infuses a plot twist. He says he committed the crime for money and that he had no personal beef with the victim. Now. Kumar must look for the person who ordered the hit. He continues his investigation and we learn more about Iyal through the eyes of the people she was acquaintance with. Soon Iyal’s ex-boyfriend Prashanth (Vignesh Shanmugam) comes in to the picture and begins to narrate about their relationship.

We are taken back to Iyal’s college days where Prashanth meets her for the first time. Iyal’s writing draws him to her. He gets to read an unfinished work of her and falls in love with her. Iyal’s transgressive writing style and her belief that true experiences are what help in building authentic stories lands her in trouble. She begins to work on an erotic novel and she goes about trying to get few experiences. This puts her in the path of a strange man. Did this strange man murder Iyal or is there anyone else, how Kumar cracks the case is what makes the rest of the flick.

Debutant director Mano Ve Kannathasan ticks most boxes of the prerequisite elements that are necessary to build a perfect murder mystery. Given the running time of the flick, he does not waste any time in setting up the stage. He lures us in to the flick right away with the murder of one of the lead characters. Then he goes on to introduce the character through the eyes of people that know her and in process slowly decoding the mystery. Story teller Mano Ve Kannathasan keeps his screenplay crisp and tight. He retains the mystery while giving it away in pieces just enough to make us look for the next piece. By this he manages to hold our attention till the very end. Film maker Mano Ve Kannathasan seems to have a flair for characterization. He sprays a different fragrance to the lead character that investigates the case. He is not the regular know it all cop that we are often used to seeing. He is just an ordinary person trying to survive everyday battle.

In fact, he even makes the character say it. There is a point in the film where Kumar says that he is not a proficient investigator and that he landed in the job just because his father passed away while on duty. The intent here is interesting but unfortunately the scenes that are built to portray Kumar as an ordinary man are not effective and they seem forced. For instance, he forgets to check the CCTV footage in the flat, he overlooks an important clue that is sent to him. These things just do not sit well in the attempt to show the vulnerability of a man. It simply ends up being conveniently written sequences. If the director had put in a little effect to setup better circumstances to show his vulnerability, Irudhi Pakkam would have been solid. Nonetheless, it still is a decent thriller to be spending your time watching it.

Actress Amrutha Srinivasan sells Iyal convincingly. Actor Rajesh Balachandiran is not effective but he just about manages to cross the touchline with his performance. Actor Vignesh Shanmugam is adequate. The rest of the cast has delivered what was asked of them.

On the technical front, music director M. S. Jones Rupert’s songs do not hold our attention but he makes up for it with his impressive background score. Cinematographer Praveen Balu has covered the drama from best angles possible. Editor Ram Pandian has done his part well in trimming the flick.

On the whole, Irudhi Pakkam is a decent murder mystery thriller that manages to keep us invested in the film for the most parts despite its flaws.