Sundar C who was last seen in ‘Aambala’ is back again with Aranmanai 2. Siddarth and Trisha play the lead roles. Hansika is back again as a ghost. Rest of the cast included actors like Poonam Bajwa, Kovai Sarala, Sathish and Manobala. Radharavi and Aadukalam Naren are the bad guys here. Hip-Hop Aadhi scored tunes. Technical team featured U.K.Senthil Kumar for cinematography and N.B.Srikanth for editing. So has the magic been done again like its predecessor? 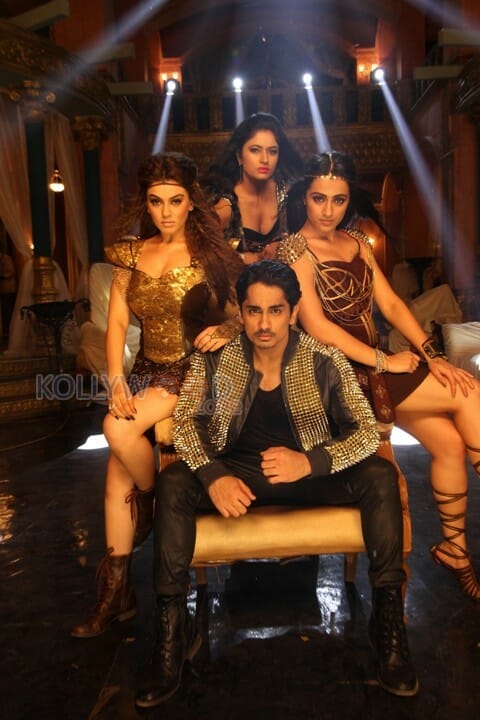 Just like ‘Aranmanai’ all we have is a mix of Horror and slapstick comedies. The movie’s story is also similar just like its predecessor. The ghost is trying to get revenge. Hansika is just doing role of ghost once again. Trisha is the show stopper here. What a performer she is? She is 31 years and she still has the hotness. The bikini show and the wet show will make anyone drool. The actress can still be the lead actress for another 50 movies. Apart from glamour, she even emotes flawlessly.

The scary scenes are the perfect example. You got it trish! Way to go. Hansika is the core performer. But still she misses it by a narrow margin. The same has happened to her in ‘Puli’ where she lost to Shruti Haasan. The plot telegraphed everything so you know what is going to happen way before it does happen. The character development seems interesting, for about fifteen minutes. The villains come off as incompetent, not particularly menacing. The house nor the surroundings were spooky.

The best thing about the movie was, the cinematography, the staging, and the costumes. Everything was gloriously detailed and lovely. The movie falls falt at few parts as a result of poor editing. Those places Sundar C has clearly kept Trisha’s skin show and saved the movie. It kept the wheel running. Siddharth was worthless. Except for the hot scenes with Trish, he has nothing to do. But still it’s a relaxation for him as well as us to see him in a ‘normal’ cinema. Soori, Kovai Sarala and Manobala provide some slapstick comedy. But Santhanam magic is clearly missing. Rich color tones stylize the film for a gritty and unique ambiance.

Overall, the movie isn’t terrible, but it isn’t special either!