Tamil cinema delivers idyllic and breezy love stories from time to time. Last year, it was Prem Kumar’s romantic drama 96 that created that sparkling magical sensation in audience. This year, we are almost at the end of the year, and just when Tamil audience were prepared to turn the 2019 datebook page with just a single poignant romance drama in the likes of House Owner, in comes Sillu Karupatti as a tardy entertainer that stirs our soul and ‘upend us’ in words of Gautham Vasudev Menon. But unlike Lakshmy Ramakrishnan’s House Owner, Halitha Shameem’s Sillu Karupatti is not poignant but is light hearted and mirthful. It is only fair to say that the film in bits and pieces reminds us of the anthology Netflix romedy series Modern Love. 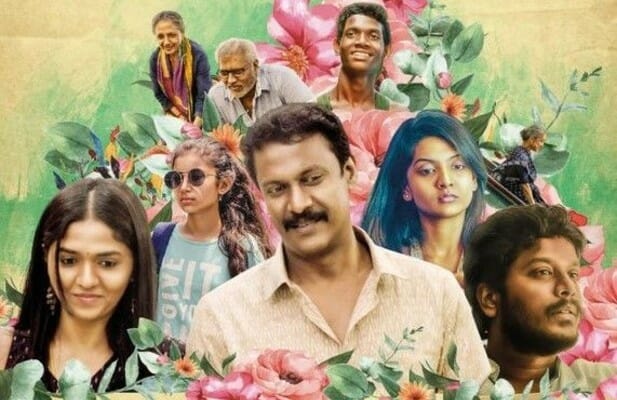 Some films make you feel heavy, some emotional, and some idiotic. But very rarely comes in a movie that squashes all above and send you home with a light hearted feel. One such film is Sillu Karupatti. Film maker Halitha Shameem intends to explore love that happens at unusual places and phases of life. To do so, she knits together four different ode love stories Pink Bag, Kaaka Kadi, Turtles, and Hey Ammu. Each story defines love from the perspective of different age group with tenderness.

The opening episode Pink bag, rolls out an innocent love story between two kids Maanja (Rahul), a boy from penurious background and Mitty (Baby Sara), a girl from an affluent background. This mini movie recites a fairy tale sort of love story that puts smile on our face. Just like how magnificently Halitha Shameem handled the innocent fondness between the kids, she treats the class difference among them without getting too mushy. Maanja gets to know Mitty through a photo in a greeting card that he picks up from a pink bag when he rummages the dump. Things begin to shape when he starts to receive things regularly. The affection shared between them is recited through a tortuous flow.

Pink bag is succeeded by Kaaka Kadi, a delicately developed blissful love story with a fine share of humor. Mugilan (K. Manikandan) is an easy going youngster who works in a private company and spends rest of his time as a meme creator. He frequents cab rides with Madhu (Nivedhithaa Sathish) on his way to his work place. Everything seems to be fine in life for him but that’s not how life goes. One day he learns that he is suffering from scrotum cancer. He gets dispirited. But joy comes in to his life in the form of Madhu. How her entry in to his life brings back optimism in him is what makes the rest of the story.

Then we have Turtles, a beautifully woven old age love story that puts forth a genuine love tale of two elderly individuals. Navaneethan (Krav Maga Sree Ram) and Yashoda (Leela Sampson) strike a conversation at a hospital cafeteria when they sit at the same table to have their meal to undergo their postprandial blood test. Yashoda invites Navaneethan for a turtle walk at the beach. In the breeziness of the beach they gradually open up to each other and begin to discuss their lives. Is it love that they seek for or an understanding companionship to spend their last phase of life, director Halitha Shameem leaves the narrative open to decide for ourselves.

The final episode of the anthology drama is Hey Ammu, it explores the main issue that breaks a marriage and lays stress on the fact how beautiful marital life would turn out if we are ready to get rid of our egos. It is about Dhanapal (Samuthirakani), a negligent husband and his wife Amudhini (Sunaina), who toils throughout the day only to be treated as a flesh at the end of the day. They have a boring marriage which is at the brink of failure which leads Amudhini to find solace in a new company that comes in the likes of an electronic gadget. But at an unexpected place miracle happens which reignites the spark that had faded away in their marriage.

The special thing about Sillu Karupatti is that love happens at different age and there are discussions of all sorts but not at any point film maker Halitha Shameem allows the flick to get in to the vulgar zone. On the love journey she takes us on, she graciously lays light on the joy, morale support, companionship, and enthusiasm that love could bestow in human lives. The casting of the film is done to perfection and that really helps the audience to get in to the characters even in a short span of time. Every artist has played their part so adroitly that the flow of the flick goes so smoothly without disturbing one of the other mini flicks.

On the technical front, the collection of cinematographers have captured the motion picture with equivalent love as that of the director’s, which is further complemented by musician Pradeep Kumar’s music.

On the whole, Sillu Karupatti is a must watch film for romance genre lovers as it fills the square with love and love is not only in its screenplay but in its frames and in its background scores as well.