Caste discrimination and social injustice are the two popular terms at the moment in Tamil cinema. Director Mahivarman C. S reassures that fact with his work Vaaitha. The film is about a laundry worker who gets injured in a road accident caused by a man from the so-called privileged community, and his struggle to get justice in the judicial system that is framed by individuals from the privileged community. Veteran actor Nassar who was last seen in the sports drama Clap is back on screens with his societal drama Vaaitha. Actor Mu. Ramaswamy has essayed a vital part in the flick. Filmmaker Loceshwaran C has helmed the flick. So, how has the movie come out? Is it solid enough to make an impact in the box office and add another feather to veteran actor Nassar’s performer hat? To know that let us get into the movie review. 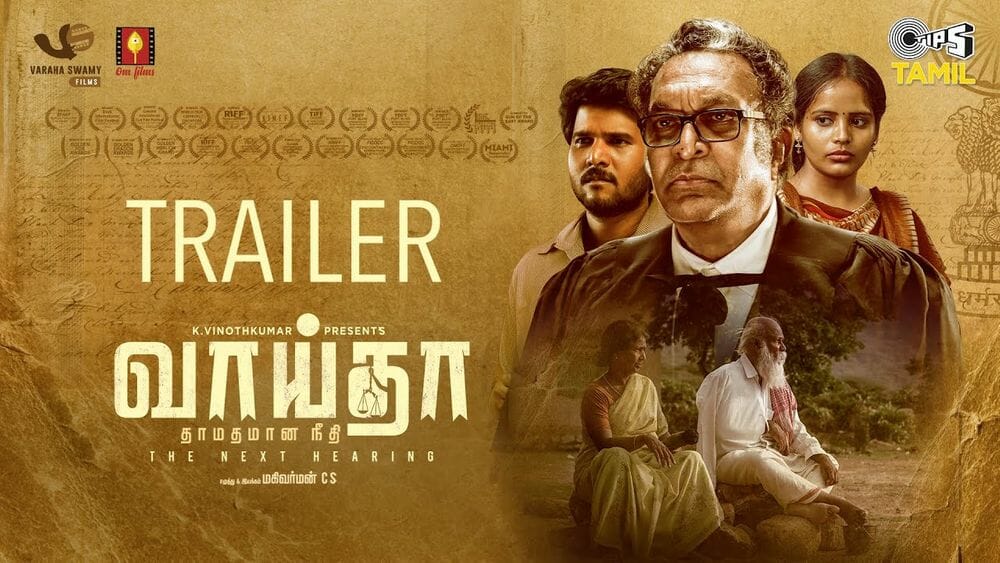 The film follows the life of Appusamy (Mu. Ramaswamy), a humble laundry shop worker who, even at his senior age, fights hard to make ends meet. He lives with his son Vicky (Pugazh Mahendran). Vaaitha opens with a brutal accident that leaves Appusamy injured. The accident was caused by Anbazhagan, son of Muthusamy, an influential local politician. The accident confines Appusamy in his daily activities pushing the family further into the financial crisis. A local politician encourages Appusamy and his family to seek compensation from Muthusamy. He takes the advice and approaches Anbazhagan seeking compensation. But a caste-saturated Muthusamy not only does not cooperate for a peaceful settlement but embarrass Appusamy citing his caste.

Using his political influence Muthusamy gets the police to file a bogus bike theft case on Appusamy. When he refuses to back down, they go after his son Vicky and threaten him to stay quiet about the accident. Realizing that he would not get justice with the police, Appusamy decides to approach the court. When he does, it is not what he had anticipated. He is made to marathon between court and his home with Vaaitha after Vaaitha. An upfront lawyer comes for his rescue. Can the ordinary folks take on men in power and outdo them, and will the lawyer ensure that Appusamy gets the justice he deserves, is what makes the rest of the flick.

Ever since Jai Bheem became a talking point, Tamil cinema has begun to witness a surge in courtroom dramas. Vaaitha is the latest addition to the list. The plotline of Vaaitha is apt to make a solid poignant film. But director Mahivarman C. S stumbled on the same speed bump that most directors stumble on of late. In order to be able to deliver his message he turns Vaaitha into a lecture delivering courtroom drama. It’s a recital, rather than a visual. Even if we get along with that narrative style, Vaaitha loses focus and goes astray to cover a wide range of issues in the society. Nothing wrong with the approach, but director Mahivarman does them as if ticking a list of checkboxes. To top it, the characterization of actor Nassar could not be any less sloppy. Director Mahivarman has curtailed the character to a limited screen time. It is hard to comprehend what he intends to achieve with the character as it is not as impactful as one would have expected it to be.

This is not to say that Vaaitha has wholly fallen flat. The film has its bright facet. The world director Mahivarman shapes around his characters, is authentic. We wish we had more of that nature in the court proceedings as well rather than a dramatic tone. After a period of meandering all over the places Vaaitha arrives at its final act where actor Mu. Ramaswamy delivers a striking performance trying to exhibit the powerlessness of people at the bottom of the ecosystem, and how the system treats them when they seek it for justice. But unfortunately, it does not create an affecting outcome in us as Vaaitha had already lost our attention in the build up to the moment.

Veteran actor Mu. Ramaswamy cakewalks his part. He sells Appusamy convincingly. Veteran actor Nassar pulls off his part effortlessly. He brings forth his years of experience to add character to his badly written part. Actor Pugazh Mahendran struggles even in a part that requires so little of him. Actress Powlen Jessica has so little to offer to take forward the proceedings. Nevertheless, she does justice to her part. Actor Prasanna Balachandran is effective. Actor Muthu Azhagarsamy is adequate. Actor Regin Rose is functional. The rest of the cast has delivered what was asked of them.

On the technical front, music director Loceshwaran C tracks are not inspiring. Even his background score is not any different. Cinematographer R. J. Senthumurugavel Angharagan has tried to cover the entertainer without losing the sense of a feature film. But he could have done a better job. Editor Naresh Gunaseelan should have put his scissors in the right places to trim off the shortcomings in his colleague’s work.

On the whole, director Mahivarman C. S’s Vaaitha struggles to make an impact despite a strong cast on board to sell what it intends.