Certain combos of two actors remain evergreen in our memories. One such combo was the union of actors Vijay Sethupathi and Parthiban in Naanum Rowdy Dhaan. The chemistry between them had an amazing reception among the audience. When the news of the duo teaming up once again for Tughlaq Durbar made headlines, naturally the expectations skyrocketed. The strange title added to the buzz. It is not often we get to enjoy a decent political satire in Tamil cinema as quality as Manivannan’s Amaidhi Padai. Films that hit the screens claiming to be political satires, frequently fall flat. Will Vijay Sethupathi’s Tughlaq Durbar escape that shadow and be an entertaining experience? To know that let us get in to the movie review. 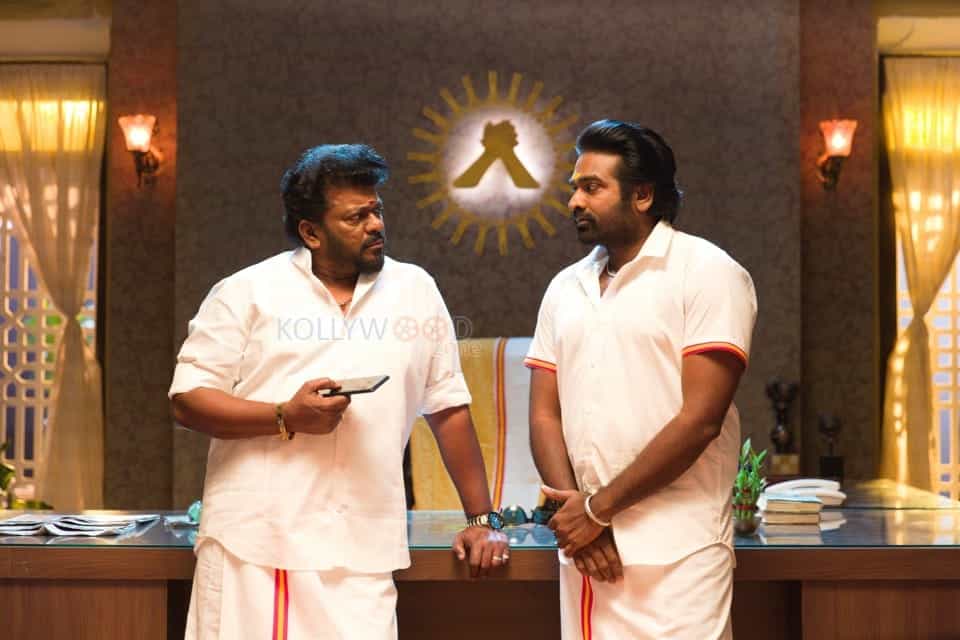 The film follows the life of Singaravelan (Vijay Sethupathi). The drama opens with Rayappan (Parthiban) giving a speech in a political rally. A pregnant woman in the rally collapse and goes in to labor. The women in the rally treat her, and she gives birth to a boy child. The child is handed to Rayappan who gives the name Singaravelan to him. Twenty-five years forward Singaravelan becomes Singam in the locality. Singam develops a fascination over Rayappan and the way he is respected in the locality. He aspires to be an important person like him. His fixation turns in to a desire for association with Rayappan. But Singam’s sister Manimegalai (Manjima Mohan) and girlfriend Kamatchi (Raashi Khanna) do not want him to walk in the path of a dirty politician like Rayappan. Singam does not Heed to their concerns and tails Rayappan closely.

Meanwhile, the local body elections are announced and Rayappan hunt for a loyalist who would remain under his thumb. Singam sense this as the right opportunity to connect with Rayappan and begins to do things to fall in his attention. In doing so he earns the wrath of one of Rayappan’s hooligans Mangalam (Bhagavathi Perumal). Singam succeed in earning Rayappan’s trust sideling Mangalam. Raged at losing his spot Mangalam trash Singam which leads to his expulsion from the party. Rayappan includes Singam on a multi-crore project which involves unlawful dislodging of people from a locality in favor of a real estate developer (Samyuktha). Outstripping many senior partymen Singam climb to the top of the political ladder becoming a threat to Rayappan at one point. Will both men go against each other or resolve their situation diplomatically, is what makes the rest of the flick.

Director Delhi Prasad Deenadayalan seem to be an interesting addition to Tamil cinema. The way he writes comedy is remarkable. He has a solid grip over what he wants a particular scene to achieve. There is a clear difference in a scene, when a man who know his craft well, builds it. One can experience that in Tughlaq Durbar. Nothing complex or extraordinary, he pulls stuffs from day-to-day life and presents them in an enjoyable angle.

Story teller Delhi Prasad Deenadayalan has got quite a few prerequisites right to build an entertaining political satire. One of which is the casting department. No matter how good a comedy scene is written, their success still relies on the actors that perform them. Hence, film maker Delhi Prasad Deenadayalan’s decision to bring actors Vijay Sethupathi and Parthiban on board deserves acclamation. The apt casting ensured half success of the flick and the rest is consolidated by wonderful writing and execution.

On the down side, apart from the two main characters the characterization of rest of the characters are not in good shape. Towards the end the movie walks down the aisle of having to deliver a message. From that point onward it begins to go down the hill and loses the attention of the audience swiftly.

Actor Vijay Sethupathi is stunning as Singaravelan. The actor switches back to the Soodhu Kavvum mode and orchestrates a laugh riot with his performance. Nobody could have been so perfect to essay Rayappan than Parthiban. He scores superbly with his timing and expressions. He walks through Rayappan effortlessly. As is the trend of Tamil cinema, the female roles are just attachments that come with a chips pack. Actress Raashi Khanna is futile for a plot like this. But a female lead is mandatory you see, so we have her coming across from time to time without any real purpose. In comparison with actress Raashi Khanna, actress Manjima Mohan has a decent part to play. But then her role is poorly sketched that she looks clueless on screen. Comedian Karunakaran is inconsistent in the job he was hired to do. Actor Sathyaraj establish his presence even in a cameo appearance. The rest of the cast has delivered what was asked of them.

On the technical front, music director Govind Vasantha’s songs do not hold our attention but he makes up for it with his impressive background score. Cinematographers Manoj Paramahamsa and Mahendiran Jayaraju frames are passable. Editor R. Govindaraj has done his part well in trimming the flick.

On the whole, Tughlaq Durbar is a satisfying banana leaf meal from actor Vijay Sethupathi after a long time, and if you happen to be a fan of political satire, then you are in for a double treat.