After his lackluster action flick Seeru, actor Jiiva is back on screens with his social romantic road drama Gypsy. Director Raju Murugan has a film release nearly after 4 years after his critically acclaimed political satire drama Joker. At a time when communal clashes and violence have almost become regular news in the country, in comes story teller Raju Murugan’s Gypsy to insist the necessity of religious tolerance among people to coexist peacefully. Director Raju Murugan tries to narrate this message by means of a beautiful love story. Naturally, being a film that talks of communal elements the entertainer had to cross a long and hard fought battle with the censor board to get to the theaters. But has the flick stood up to its expectations? To know that let us get in to the review. 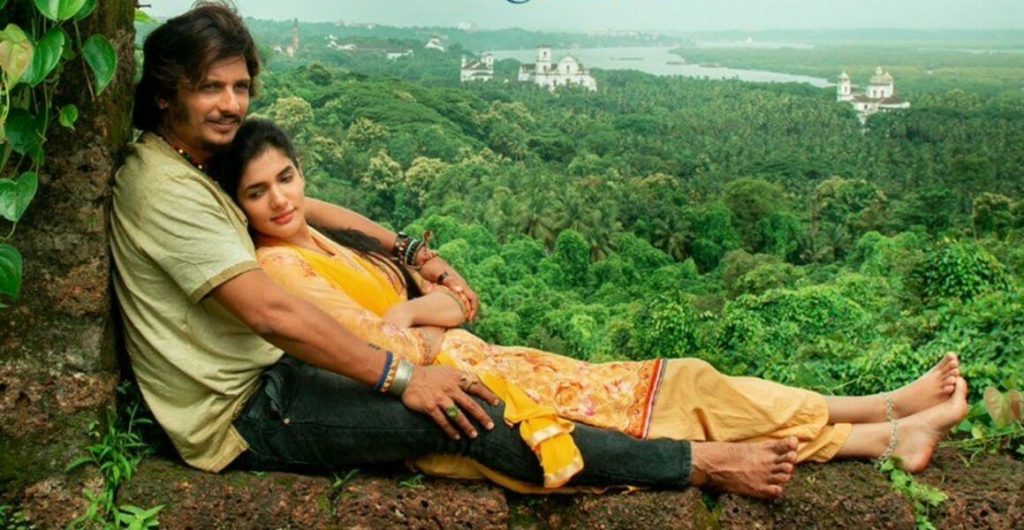 Gypsy follows the life of Gypsy (Jiiva), who loses his Hindu father and Muslim mother at a very young age due to the Indo Pak violence. He gets adopted by a wanderer named Senior who brings him up in the nomadic style as well. Despite his nomadic lifestyle Senior utters to Gypsy that he should find someone whose face he would even remember when he is at his death bed and he should spend the rest of his life with that person. One day Senior passes away. Now, a free spirit man with many known languages and a singer, Gypsy keeps moving from place to place within the country with his dear companion, a white horse. They perform wherever they get an opportunity including all religious spots to make some bugs to make their ends meet. On one instance, Gypsy travels to Nagore in Nagapattinam district in southern Tamilnadu and sets up his camp. While performing in the city he falls for Waheeda (Natasha Singh), who belongs to an orthodox Muslim family. Waheeda also falls in love with Gypsy.

Their love story is not built in a sweeping way but rather in an authentic way. To Waheeda Gypsy represents freedom and everything that she is deprived off in life due to her conservative father Muthalippu (Lal Jose). Hesitant of her father’s reaction, Gypsy and Waheeda elope from Nagore and get married. When Waheeda becomes pregnant, considering her health factor Gypsy decides to stay in Varanasi. But unfortunately a communal unrest breaks out in the city. Being a Muslim Waheeda is put under immense pressure by the majority Hindu community which terrifies her to a greater extent which in turn subjects her to mental pressure. Things further go downhill when Gypsy is taken under custody as part of dismantling the violence. This separates Gypsy and Waheeda. And from this point the love story becomes intense. What will happen of Gypsy and Waheeda, will Gypsy be able to join his family again, is what makes the rest of the flick.

Director Raju Murugan establishes the theme of his drama in the very opening scene in a very emotive way. Right from the opening of the flick story teller Raju Murugan fills every possible space in the entertainer with a call for humanity. Even the name of every significant character in the flick transmits a heavy message. The entertainer does not just voice for religious tolerance but for absolute freedom for all beings on the core. Many dialogues in the film are very powerful and cleverly written. The best one of many is articulated by Gypsy, when asked about his ethnic background, he simply says, “matham pudikatha manusha jathi.” It is these affecting lines that lifts the flick and keeps us in to it.

The romantic track between the lead characters starts off without a spark or passion. Not sure whether it is deliberately done in order to evoke the intensity once they are separated by the communal element. It is this factor that makes it little difficult to pin for the characters. Also, it is this portion that slows down the flick considerably. But once the couple hits the road the flick begins to move with the liberation flow quite well. Unlike the elopement scenes that Tamil audience has witnessed so far in Tamil cinema, the way Gypsy and Waheeda leave town is uniquely developed. But clearly Gypsy lags the flow that the effective Joker and tender Cuckoo had. Had the censorship cuts had a part to play in disrupting the flow of the film? If so, it is undeniably a situation among a lot in India that needs amendments.

Actor Jiiva is natural and shoulders the flick on his own with his performance. It is pleasant to see actor Jiiva in an effective role after a long time. Actress Natasha Singh is apt for the role but is inconsistence with her performance. The rest of the cast has delivered a neat performance.

On the technical front, musician Santhosh Narayanan aids in elevating the mood in the poignant portions and even his music has the freedom rhythm in it that the film pins for. Cinematographer S. K. Selvakumar has placed the cameras in the best angles possible to cover the scenic beauty of nature of diverse cultures. His work is well complimented by editor Raymond Derrick Crasta’s editing work.

On the whole, Gypsy does justice to its name by clearly exploring the need for absolute freedom for all human beings despite their ethnicity but it is the narrative style that lags a wee to deliver it.