A rather slow movie but with a story of matter and humor- that is how the film Nimir can be described in few words. In the beginning, it takes a considerable amount of time for the audience to fully indulge in the mood of the film but as soon as one accomplishes that task, the movie has enough matter to be praised. There are different sets of audiences who watch films- while some are commercial bugs, others are intellectual prone and for all of them, Nimir has something to offer. It seems to strike a balance quite well between humor and intensity. The actor has done what he is known for doing. The director has arranged the scenes quite well and even played quite an important role in the film.

The direction and screenplay do all the magic that is required in the film and the man behind the greatness is none other than Priyadarshan. From the very beginning, the film strikes a keynote with the black and white sequence where the beauty of nature amidst which a man is screen scrubbing his slippers and then looking at it proudly; this clearly shown his love, affection, and attachment with his slipper. And then comes a song sequence which comprises of all the ladies who were in the same bathing ghat. The audience is bound to recognize at that very moment that the film is definitely directed by Priyadarshan because the beginning of the film is typical of his style. However, criticism for the same can be done instantly because the beginning seems more like a ‘chappal advertisement’! but then as the story progresses the screenplay and acting of Udhayanidhi Stalin does the work pretty well. 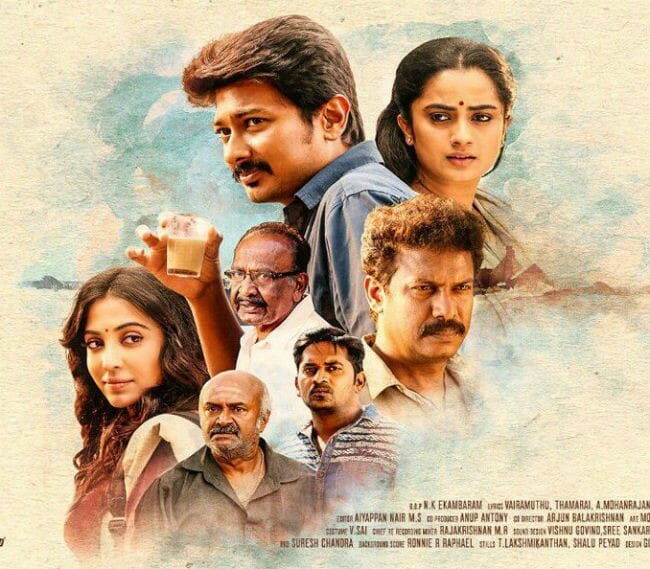 The basic plot revolves around the character of a photographer who is the protagonist and he wants to take revenge from a random stranger who has once humiliated him badly in a fight. The plot starts from a point and reaches to that part when the protagonist’s female interest is selfish enough to leave him and his genuine love to marry a richer man. People have till now never seen the director Priyadarshan being subtle and that is not what he is very strong in. And this fact was clearly evident in the way he has handled this delicate film.

The comedy scenes were supposed to be sheerly situational and incidental as well but in the film, the whole concept appeared loud and forcefully created. The comedy scenes were rather compulsive rather than natural which was somewhat aching to the eyes. Further the story also does not stands out well especially when Selvam gets beaten up and humiliated by a stranger and he suddenly vows to not wear his long-loved footwear until he gets his revenge taken. This is not really dramatic but is “over the top”.

The movie can be said to be a definite “so-so” and nothing more than that. The other actors did their work but however, things did not go on the film’s way so it can be said that a lack of maturity was what this film has.