Vijay Devarakonda became an overnight sensation after the release of his submissive and hostile romance drama Arjun Reddy. The actor who amplified his fan base in all the South Indian cinema industries is back again on screens to treat his fans with a romantic drama yet again. And as in Arjun Reddy the young and dashing actor shines in Dear Comrade as well along with his leading lady Rashmika Mandanna who has put on a good show. 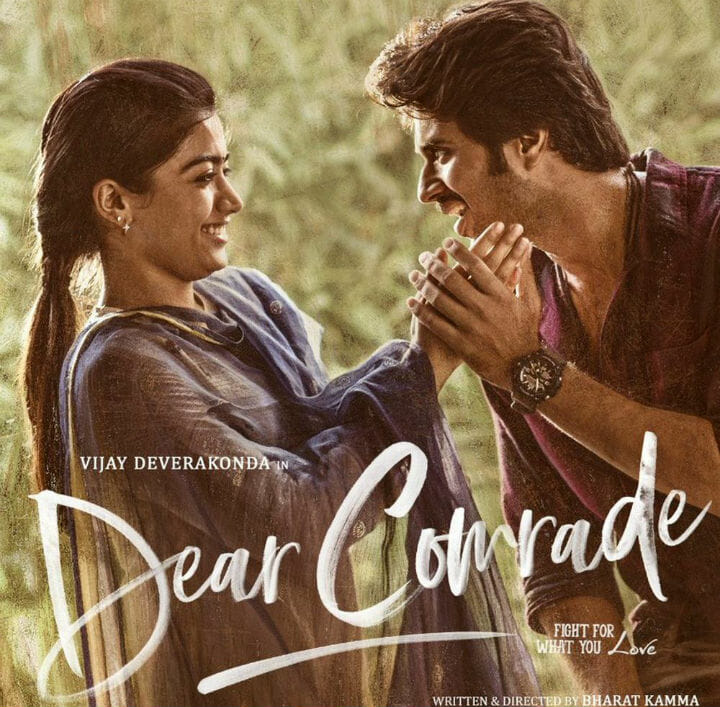 Bobby aka Chaitanya (Vijay Devarakonda) is the vanguard of the college student union with leftist views and aggressive bent of mind. When we get to see Vijay in the aggressive shades in Dear Comrade we also see a glimpse of Arjun Reddy there. But not even for one seconds get in to the think that the genre of romance in analogous. While we saw Arjun Reddy in a cantankerous tone who suffered to control himself here in Dear Comrade he is aggressive as a youngster but slowly matures with his thoughts just like any human being. He meets Lilly aka Aparna Devi (Rashmika Mandanna) a women cricketer who currently plays for the state team and has a desire to play for the national team one day. Things get mixed up during their first meeting. But when she visits his place they get to know each other and resolve their early misunderstanding. And slowly they begin to like each other and fall for each other in the harmonious musical score of Justin Prabhakaran.

But again Bobby’s ill temper and violent behavior is too much to handle for Lily which propel them to part ways from each other. Bobby chooses to study about sound of nature which takes him to many places with diverse background. Now after three years he is a different person who learns that Lily has quit playing the sport due to some mental health issues. He then storms in to Lily’s life again to make her fight for what is hers and hence the title Dear Comrade. The whole film erupts at the place where Bobby tells Lily, “The day you begin to love me more than cricket, she needs to be cautious.” What made Lily quit the game, did she take up the game again after Bobby insists her, is what makes the rest of the film.

Vijay Deverakonda is the perfect cast for the role of Bobby. The actor has depicted the character transverse from the angry young man (the hangover of Arjun Reddy) in the first half to a mature individual in the second in a stunning way. Rashmika Mandanna surprisingly steals the show even with Vijay Devarakonda being at this best and the whole credit goes to Bharat Kamma for giving in such a space for the female lead character in his script. The rest of the cast has also giving their best performance in the flick.

On the technical front, Sujith Sarang’s camera has not only cranked the emotions of people with precision but also the beauty of scenic locations. Justin Prabhakaran’s background score is a big plus for the venture as it is appends to the emotion of an anger young man as well as in the love embryonic moments.

On the whole, Dear Comrade is a fresh plot which honestly speaks of women empowerment and stresses the importance of a comrade in the lives of people who are too afraid to fight for what they want in life.