Actor Dulquer Salmaan is back to Tamil cinema after his full fledged romantic Tamil film O Kadhal Kanmani. There are some films which create a lot of noise and buzz around them but fall flat to the expectations that it managed to create. And then there are some films that hit the screens as an underdog without making much noise but get spoken of by its content. Kannum Kannum Kollaiyadithaal falls in to the latter category. The flick was postponed multiple times due to its financial issues; even its first look posters and trailer cut were formal and ordinary which did not garner much attention among the audience. Just when talks were beginning to float that the flick has been shelved forever in comes Kannum Kannum Kollaiyadithaal to theaters. But have the romantic comedy drama managed to impress the audience despite all its barriers? Let us get in to the review. 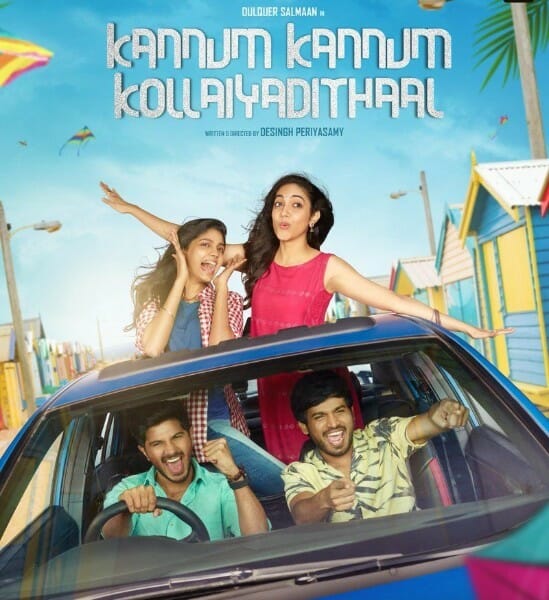 Kannum Kannum Kollaiyadithaal opens with a modish pool party song where we get to see two carefree youngsters Siddharth (Dulquer Salmaan) and his friend Kaallis (Rakshan) have the time of their lives. Siddharth is introduced as app developer while Kaallis as an animator. But in reality they are IT prodigies and fraudsters who deploy all modern techniques to swindle money from people through online by doing con jobs. Their ability to not repeat the job twice keeps them out of dangerous. Life is a party for them and fun is what they are always after. While life moves on this way for the both, one day Siddharth comes across Meera (Ritu Varma) while she delivers a lecture to a shopper about the value of a penny. Yes, the inevitability of Tamil cinema comes in to play. Siddharth is smitten with Meera. It is safe to assume it was by her beauty and not by her lecture.

He begins to stalk her for few days, of course with the assistance of his friend Kaallis, who else? He learns that she is a bit frugal but an honest woman who works as a beautician. After few days of stalking he proposes his love to Meera. She accepts his proposal and they begin to go out. Meera introduces her friend Shreya (Niranjani Ahathian) to Siddharth and Kaallis. In no time, Kaallis and Shreya get in to a relationship. Now, both the women who have stormed in to their life make the carefree men to approach life in a different way. They draft a plan to start a new life in Goa by launching a new business with all the money they have managed to save in life so far.

When everything seems to go as planned and just when we are beginning to think that we have landed in for a film that is nearly at least a decade old, Prathap Chakravarthy (Gautham Vasudev Menon), a well groomed and classy cop puts himself in to the proceedings with a mission, which ‘deceptively’ appears to snub Siddharth and Kaallis who have involved in online scams. But towards the end of the first half there is the twist in the plot moment when it is revealed that Prathap Chakravarthy is not after Siddharth and Kaallis. So who are the people Prathap Chakravarthy is really after, are Meera and Shreya really who they claim to be they are, did the two couples leave to Goa, is what makes the rest of the flick.

Despite the flaws in the movie story teller Desingh Periyasamy has delivered a film with a fresh plot for Tamil cinema. The first half of the flick navigates leisurely at its own pace filled with a lot of clichéd scenes which really tests our patience. But with a neatly laid out twist at the end of the first half the flick gets the audience invested. The second half slightly begins to pick up pace and inconsistently offers the thrills. It is the director Desingh Periyasamy’s smart planning of placing his twists in the plot that attempts to send the flick in to the watchable precinct. But his lazy writing which makes the flick move in its own comfortable zone makes it hard for the audience to stay engaged. Also, the lengthy running time of the flick does not help either.

The amiable performance from the film’s casting helps a lot in keeping the attention of the audience. Actor Dulquer Salmaan shines bright in his role and seems to be quite natural. Actress Ritu Varma is gorgeous and cake walks through her role. VJ turned actor Rakshan is surprisingly funny and scores with his one liners which are enjoyable though two or three blackouts. Actress Niranjani Ahathian also impress in her role. Then we have the one of the kind artist Gautham Vasudev Menon making his presence felt with his chic performance.

On the technical front, musician Harshavardhan Rameshwar’s music is average while Masala Coffee team amaze with their background score. Cinematographer K. M. Bhaskaran’s frames and lighting has made the visuals rich and colorful. While it is beautifully uplifted by editor Praveen Anthony’s scissor works.

On the whole, Kannum Kannum Kollaiyadithaal is a film with a fresh plot for Tamil cinema but is let down by comfortable writing pushing it in to the average zone.