Tamil film maker’s aversion to having a proper writer on board has ruined numerous scripts of substance. But still there is hardly any sign of change. Another weekend, and another script of substance gets thrown under the bus. Yenni Thuniga is a revenge tale about a man who hunts down a gang of robbers after they shoot someone dear to him during a high-profile heist. Actor Jai who was last seen in the psychological action thriller drama Pattampoochi is back on screens with his action thriller movie Yenni Thuniga. Actress Athulya Ravi has played the female lead in the movie. So, how has the action thriller drama Yenni Thuniga come out? Will it be a successful venture and bring back actor jai to the winning zone again? To know that let us get into the movie review. 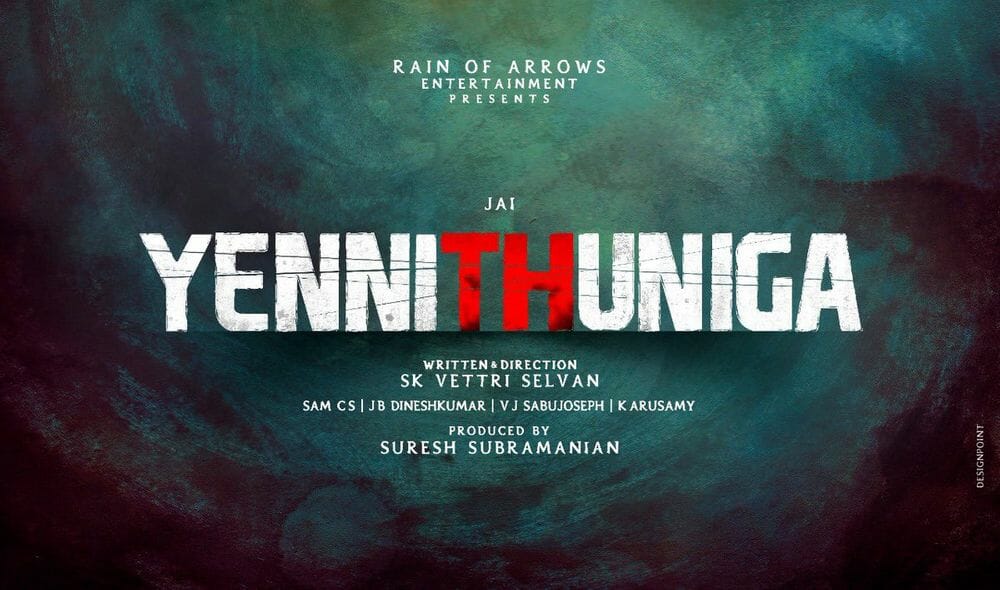 Yenni Thuniga revolves around Kathir (Jai), a happy go lucky young man who leads an ordinary life with his father (Marimuthu), and his wife to be Narmada (Athulya Ravi). The film opens in the United states, where we witness a bunch of henchmen go on a carnage trying to find out the whereabouts of diamonds worth billions that belong to their boss Sam (Suresh Subramanian). It is known that the diamonds are with a covetous minister named Needhi Manikkam (Sunil Reddy). Sam hands over the job of retrieving the diamonds to a local heist expert Madhan (Vamsi Krishna). Learning that the diamonds are placed in a jewelry shop, Madhan hatch a plan to rob the place. But the execution goes wrong, and they are forced to fire at people in the store to make their way out.

Narmada is one among the customers in the store who has come to do her wedding shopping. She gets shot. Upon knowing this, Kathir gets enraged, and decides to go after the gang unaware of the bigger picture in play. But he is clueless as he does not know the identity of anyone from the gang. His only hope is a woman who is fighting for her life after getting fatally injured in the incident. Meanwhile, Madhan is put in a pickle as the diamonds they stole gets dispossessed from them. The pressure further mounts on him when Kathir comes into the picture. Where did the diamonds go, has Kathir got anything to do with it, and how he exacts his revenge, is what makes the rest of the flick.

Yenni Thuniga is the kind of film where you do not go looking for reason, logic, and nuance. It is a no-brainer time killer product. Director S. K. Vettri Selvan seems to be honest about this factor. He does not concern himself with inculcating the above-mentioned elements to shape his script. Rather he exhausts a good amount of energy in keeping the screenplay hasty. He does succeed in his effort. But the problem with Yenni Thuniga is, what is the point of having a pacy screenplay, if you have not got the audience hooked to the plot in the first place. But does filmmaker S. K. Vettri Selvan care? Absolutely not. He just goes about building the proceedings with obsolete scenes lifted from typical action dramas of Tamil cinema.

Director S. K. Vettri Selvan opens Yenni Thuniga with a formulaic mystery block to get the attention of the audience right away. But after that, he takes ample amount of time in setting the stage. He writes tepid romance angle to fill these portions with a seeming belief of trying to cook something different, when it is the same old bread. When the film brings all its main characters together, Yenni Thuniga does get speedy. But by that time, we could not care any less about what is happening on the screen. In the end, even after our concession to overlook its flaws Yenni Thuniga does not have enough to entertain us, and merely end up flexing our patience to great extent.

Actor Jai is apt in the role of Kathir. The commercial part demands so little of him, and he pulls off his role effortlessly. Actress Athulya Ravi’s Narmada is a typical Tamil cinema heroine characterization. Nonetheless, the actress lives up to her part. Actress Anjali Nair does serve her purpose for being on board. Actor Marimuthu is effective as usual. Actress Vidya Pradeep has done justice to her role. Actor Vamsi Krishna does what he has been doing ever since his debut in Kollywood in his stereotypical baddie role. Actor Sunil Reddy is adequate. Actor Munnar Ramesh is operational. Actors Kuraishi, Abhishek Shankar, and Suresh Subramanian are functional. The rest of the cast has delivered what was asked of them.

On the technical front, music director Sam C. S’s tracks are not inspiring. Even his background score is just too loud and jarring. For a feature film cinematographer J. B. Dinesh Kumar’s frames are not sufficient. His visuals are dry and a sore sight to the eyes. Editor V. J. Sabu Joseph has tried his best to weed out the faults in the visuals but there is only so much an editor could do.

On the whole, actor Jai’s Yenni Thuniga has interesting ideas but the bag of cliches deployed to shape it, becomes its Achilles heels and ruins the show.