There has always been a massive commercial space in Tamil cinema for bloody revenge rural tales. After playing next door city boy for a long while, actor Atharvaa Murali resorts to rural setup in Kuruthi Aattam. The film is about a young man whose friendship with the son of a mafia boss drags him into a life of violence after his friend’s death. Actor Atharvaa Murali who was last seen in the romantic comedy drama Thalli Pogathey is back on screens with his mass action thriller film Kuruthi Aattam. Actress Priya Bhavani Shankar has played the female lead role in the flick. Director Sri Ganesh has directed the drama. So, how has the mass action thriller Kuruthi Aattam come out? Is it solid enough to propel actor Atharvaa Murali to winning ways, and help restore his image as a bankable lead hero in Tamil cinema? To know that let us get into the movie review. 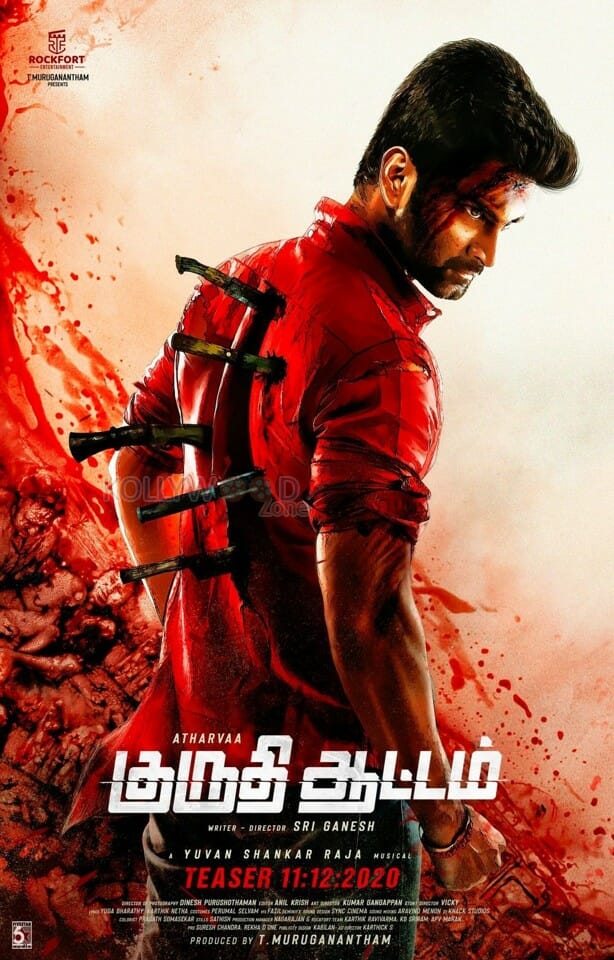 The film follows the life of Sakthivel (Atharvaa Murali), a kabaddi fanatic who is employed as an attendant in a hospital in Madurai. Kuruthi Aattam opens with a Kabaddi match between two arch rivals headed by Sakthivel, and Muthu (Kanna Ravi), the son of crime lord Gandhimathi (Radhika Sarathkumar) who has the entire city under her control. Sakthivel’s team triumphs against Muthu’s team on a regular basis. Naturally, this irks one of Muthu’s teammates Arivu (Prakash Raghavan), son of Durai (Radha Ravi), second in line to Gandhimathi. Whenever Arivu tries to start a fight with Sakthivel, Muthu steps in and calms them down. Despite being in the opposite camp, a sense of bonding goes on between Sakthivel and Muthu.

Meanwhile, Sakthivel meets Vennila (Priya Bhavani Shankar), in a typical Tamil cinema ‘hero meeting heroine’ fashion and falls in love with her. After initial disinterest, she reciprocates to Sakthivel’s feelings. The peaceful flow of life turns topsy turvy when Sakthivel decides he has had enough of Arivu’s goad and thrashes him. Humiliated and raged, Arivu seeks revenge and decides to murder Sakthivel. In unfortunate, turn of events Muthu is murders by unknown men. Sakthivel sets out to avenge the death of Muthu. Gandhimathi and Durai get into the picture with a battalion of criminals bringing the city to a standstill. Who murdered Muthu, and will Sakthivel be able to find them out and extract his revenge, is what makes the rest of the flick.

To open with, Kuruthi Aattam is not much different from the bountiful Madurai based crime films we are used to. But it is the way in which it builds its world, and the powerful characters it deploys to do it, that make Kuruthi Aattam interesting to an extent. Just like his debut work 8 Thottakkal director Sri Ganesh’s tries to weave a gripping narrative. But unlike 8 Thottakkal, he takes a huge interest in making his film a raw action-packed drama. Except for the action block in the climax, he succeeds in his attempt to a large degree. But is unable to dodge from being pointlessly violent. Sri Ganesh opens Kuruthi Aattam with a high pitch action block. What better way to open a crime drama set at the backdrop of Madurai, director Sri Ganesh seems to ask.

After setting the stage, he swiftly introduces us to a range of characters that have a bearing in the proceedings. Director Sri Ganesh exhibits a flair for characterization. There is a little backstory to every primary character to understand them a tad better. And it is not the black and white approach of labeling people good and bad, rather, if not too deep, it gets beyond that point. If storyteller Sri Ganesh had proceeded in this path, Kuruthi Aattam would have been one bloody action drama. Unfortunately, for no reasons he pulls apart everything he built, and drives the film into melodrama, and tries to plant the mandatory message for the audience. That completely tampers the flow of the movie, and pushes it into a formulaic revenge drama.

Actor Atharvaa Murali is apt as Sakthivel. He pulls off his character effortlessly. He seems to have taken a liking to perform high octane action blocks. It is evident on screen. Actress Priya Bhavani Shankar wants to be different but a stereotypical heroine role that has no hold in the proceedings. Nonetheless, the actress does complete justice to her part. Veteran actress Radhika Sarathkumar is brilliant as Gandhimathi. She steals the show, and makes her presence felt. She has had great fun playing the role. Veteran actor Radha Ravi is effective as usual. Actor Vatsan Chakravarthy serves his purpose for being on board. Actor Vinod Sagar is operational. Actor Kanna Ravi is adequate. The rest of the cast has delivered what was asked of them.

On the technical front, music director Yuvan Shankar Raja is yet to get to his best. His songs do not leave a lasting effect on us. Even his background score is just deafening, aimed to achieve the mass effect. Cinematographer Dinesh Purushothaman’s visuals hold nothing special. But it is not bad either. Editor Anil Krish’s scissor work is not sharp enough to weed out the flaws in his colleagues’ work.