Director Radha Mohan has a knack for cooking up feel good family entertainers. Even today we have a nostalgic feeling whenever we watch his works Azhagiya Theeye, Mozhi and Abhiyum Nanum. He has a flair for writing complex human relations in a funny yet touching way. But of late the story teller has been finding it difficult to do what he was exceptionally doing once. While things remain so, in comes his latest comedy drama Malaysia to Amnesia. Actor Vaibhav, last seen in the web drama Live Telecast plays the lead role in this drama and television fame actress Vani Bhojan plays his pair. So how has the comedy drama come out? To know that let us get in to the movie review. 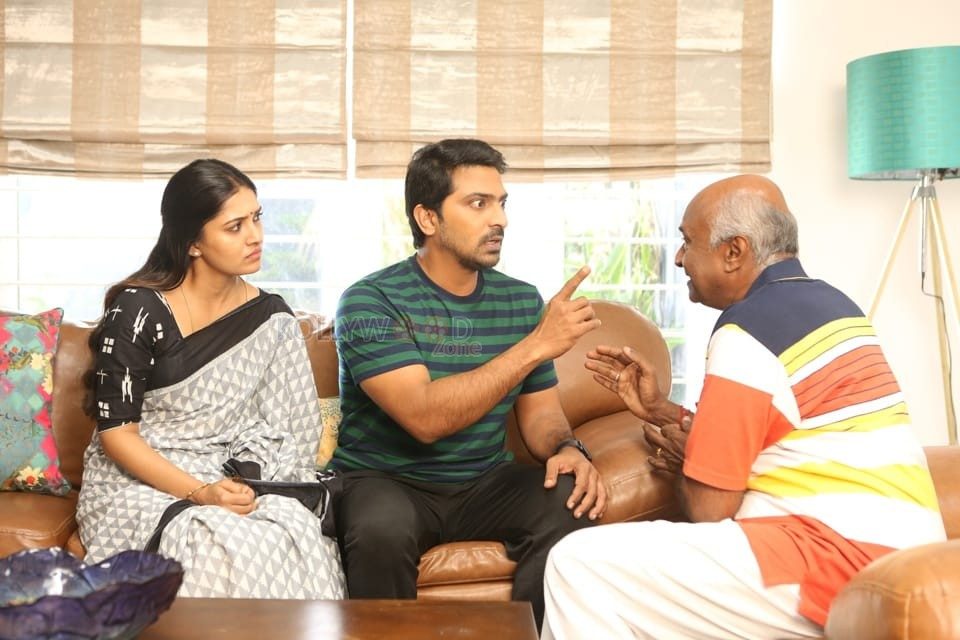 The entertainer follows the life of Arun (Vaibhav) who has it all – a successful business, a loving family, and a comfortable life. He lives with his wife Suja (Vani Bhojan) and their daughter in Chennai. Just like everybody else his life has a perfect and happy appearance on the outside. But dig in a little deeper he is keeping a secret from his family that could potentially destroy his marriage. He could not push up any further than level two in the Maslow’s hierarchy of needs triangle. After level two he derails from the triangle and starts an extramarital affair with Bhavna (Riya Suman). From time to time, he plans efficiently to pull himself away from his family to spend time with her. Now, he has not seen her in a while and desires to meet her in Bangalore. In the meantime, Suja’s uncle Mannaru (M. S. Bhaskar), a skeptical old man, pays them a visit and stays in their house to enquire about a prospective groom for his daughter.

Arun devises a plan to meet Riya. He tells his wife that he must go on a four-day business trip to Malaysia but take the trip to Bangalore to meet his mistress. But this time around his plan does not go smoothly as the flight to Malaysia in which Arun was supposed to travel goes missing. Now he must come up with an explanation to get back to his family. So, he and his friend Prabhu (Karunakaran) decide they can escape this situation if Arun act as an Amnesia patient. As agreed, Arun joins his family calming to have forgotten past events. Though his family accepts his claim, his wife’s uncle gives him a hard time with his never-ending suspicion. Will Arun and Prabhu successfully sell their lie to the family is what makes the rest of the story.

Many films that deal adultery as a comedy have been build on the same plot that Malaysia to Amnesia has borrowed. Despite being one of the most cliched plots of Tamil cinema, the fineness of creative treatment to the plot has ensured commercial success in the past. And that is why director Radha Mohan seems to have taken the plot. For a film maker with exceptional prowess to build entertaining drama it should have been a cake walk for story teller Radha Mohan to develop a drama around the plot. But somehow, he has fallen short of his own standards. The entertainer starts off in a decent entertaining zone, just when we get our hopes high and settle in for a comedy feast Malaysia to Amnesia turns in to a tragedy. If not for M. S. Bhaskar’s performance the film might have even become a tedious affair.

To be fair, Malaysia to Amnesia has its moments but the problem is, it does not stand good as a whole picture. For a plot like this penning situational comedies is where you drop your balls but for some reasons that option is not explored as it should have been. After a point we get few scenes, totally unrelated to the plot, that seem to be in the film just to push the running time further. Also, as the film progresses it inclines towards a melodramatic tone and that does not help the entertainer as well. With little innovation and better creativity in writing the flick could have been a much better entertainer.

Surprisingly actor Vaibhav does not have much to offer to the entertainer. With minimal dialogues and not so convincing performance, even a supporting artist could have pulled off his part. Actress Vani Bhojan is the typical pointless female character that film makers of Tamil cinema loves to write. Actress Riya Suman’s role is not sketched well either. Director Radha Mohan generally writes his female characters well, it is also a place where he has slid in Malaysia to Amnesia. Comedian Karunakaran in yet another disappointing performance. The show stealer here is veteran actor M. S. Bhaskar. He is the only saving grace of the movie. Veteran actress Sachu makes her presence felt in a limited screen time.

On the technical front, music Director Premgi Amaren’s songs do not hold our attention for long but he adds little value with his background scores. Cinematographer Mahesh Muthusamy’s frames are adequate in covering the drama. Editor Praveen K. L has done his best to keep the running time short.

Overall, Malaysia to Amnesia does not entertain even if you are willing to overlook the illogical aspects of the story but it still is worth a watch for M. S. Bhaskar’s show.

Malaysia to Amnesia is available on ZEE5 OTT platform for streaming.