Director Zion’s ‘Podhu Nalan Karudhi’ talks about how the world of loan sharks ruins the lives of middle class folks in Chennai, especially those who don’t permanently reside in the capital city. The film includes an ensemble cast like Adith, Santhosh Prathap, Yog Japee, Karunakaran, Anu Sithara, Ashmitha, and Leesha. ‘Podhu Nalan Karudhi’ is the debut movie for director Zion and the film is bankrolled by AVR Anbuvelraja. 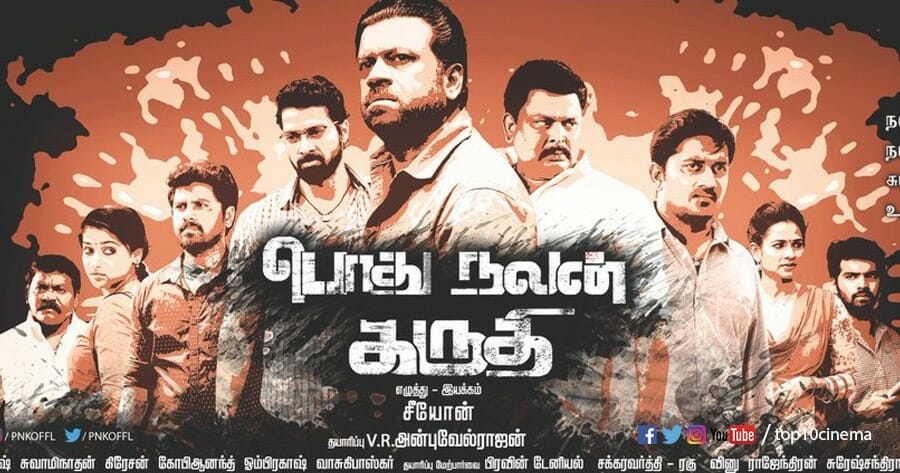 Poovarasan (Karunakaran) is a call taxi driver who is looking for his brother who went missing two years back. He supports his father, sister-in-law, and niece and he is also in a relationship with a school teacher (Anu Sithara).  Napolean (Santhosh Prathap) is the lackey of a cold-hearted loan shark Uththiram (Yog Japee) who collect money from the borrower by beating up, kidapping, or even killing them. Their competitor is Babu and the two gangs fight often when one passes the boundary of the other. The parallel story arc is about a youth Kannan (Adith) who has come to the capital city from Palaymkottai and is trying to lead a life as a two-wheeler mechanic. Subiksha is a young girl from a rich family, who is in love with Adith, but does not believe in marriage. How these disconnected characters are affected by the loan sharks is the is the story line of ‘Podhu Nalan Karudhi’.

Actor Karunakaran is the perfect choice as the gentle call taxi driver, who is defenceless against the loan sharks and misinterpreted by his family and girlfriend. The way he portrayed a character that has no shade of comedy is a proof of his versatile acting skills. Santhosh Pratap looks fit with a vibrant attitude and plays the character of a henchman of the antagonist with ease. The actors Adith, Yog Japee, Babu, and Muthuraman are perfect for their roles. Actresses Subiksha and Anu Sithara make a mark in their respective characters.

The best part of this film is the way how the director dissected the works of the loan shark and how anyone can become a backstabber any second in their business. The unconnected screenplay also makes the movie interesting.

On the contrary, the director Zion has been unsuccessful in connecting the dots and has not given enough time for each sequence to develop well enough to connect with the audience. The movie would have been a hit if the story is told in an original and raw form, but the director spoiled it with builds specially for Yog Japee that does not suit his personality and the movie as a whole. The music director Hari Ganesh has done his part well.

On the whole it is a decent movie, which dissects the working style of cut-throat loan sharks.