Sathya Shivaa’s Kazhugu is the first considerable hit venture of actor Krishna Sekhar as solo lead. The actor who has been cornered to a place where he is under the compulsion to deliver a hit under his name to reestablish his place as a marketable hero is back with the sequel of hit film. But unfortunately the sequel fails to keep the audience invested. The saddest part is to witness terrific performances of the artists getting dragged down to yield nothing. Similar to the first part, even the second part is set at the background of hilly region which fills the air with soothing weather. 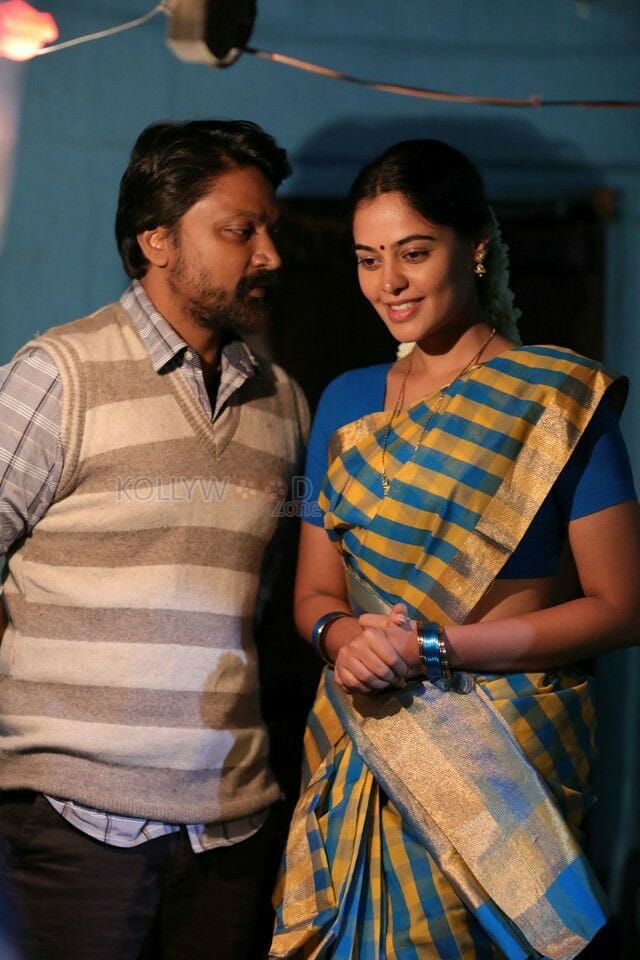 Johnny (Krishna Sekhar) and Kaali (Kaali Venkat) are petty thieves who make their living by doing small larceny and as a result of which they get in to the wanted list of police in Theni. The film opens with a group of people being clawed down to death by wild dogs. In order to defend the people who enter the forest area to cut down trees from begin attacked they decide to deploy skilled hunters. This is when M. S. Bhaskar mistakes Jonny and Kaali to be trained hunters and recruits them for the task which takes the two of them to Kodaikanal. Though both of them have never used a fire power weapon in their lifetime they immediately jump up on the offer to dodge the police.

In Kodaikanal Jonny comes across Merly (Bindhu Madhavi) but nothing brews in between them at first. Johnny and Kaali are focused on the wild dogs. On one instance Merly learns that these two are just conmen and has no prior experience in handling fire weapons. To the biggest surprise of the audience in the theater she decides not to expose them despite knowing the fact that people’s lives will be put at stake. And then comes the commercial element in the drama where actor Krishna saves Merly with just a swing of his rifle at a wild dog. What’s next? Yes you guessed it right, love brews in Merly for Jonny and she begins to tail behind him. This is what makes the first half of the film and in the second half the director has implanted a new sub plot in to the story.

MLA (Hareesh Peradi) of that constituency discovers a treasure in the forest and he has his own greedy plans but Johnny deceives him and steals the treasure from him, which sets the MLA to go after Jonny. Just when we are about to incline to the thinking that this is what is going to make up the second half, there comes an outrageous twist in the tale by then you are in no mood to care about what happens next.

Krishna Sekhar has given a natural performance and fits in the role of Jonny quite aptly. His performance in the flick strongly indicates that he has evolved as an actor. Bindhu Madhavi is also fitting in the role of Merly and is a treat to our eyes in her de-glam getup. Kaali Venkat is the best source of relief in the drama who brings down the roof with his comical expressions which are genuinely enjoyable. Bigg Boss fame Yashika Anandh has performed an item number in the movie which is catchy. Hareesh Peradi and M. S. Baskar have also given what was asked of them in the best possible way. But it is the director who has failed to capitalize on the talented artists that he had on board for the film.

The musical and cinematography department stands out in the film which demands a special mention. Yuvan Shankar Raja’s music along with the frames of Raja Battacharjee lights up the mood and gives you serious vacays goals to pack your bag right away to the picturesque locations of Kodaikanal. Unlike Kazhugu, Yuvan Shankar Raja’s music could not elevate Kazhugu 2 as it is too badly scripted.

Sathya Shivaa without any doubts has come up with good sub plots to craft the story but it is the insincere writing that has cost the film. The addition of commercial elements to the drama has also backfired as the biggest plus of its prequel was the natural sense of reality in the drama. The best exemplar is the item number of Yaashika which has been placed as the opening song of the flick which was shot to just cash in on the popularity that the actress had gained in the state recently.

On the whole, director Sathya Shivaa’s insincere writing and conciliation to add up unnecessary commercial elements have made Kazhugu 2 a dull and dreary watch.