Christening a film 3.33 is an interesting way to torch the lamp of curiosity in the audience. While it gives away that the film has something to do with time, it leaves us wondering as to, whether or not, it will be the third flick of the year based on the time loop concept after Jango and Maanaadu. Debutant film maker Nambikkai Chandru ventures in to Tamil cinema with this experimental drama. 3.33 also marks the debut of yet another popular small screen face as a lead hero. The small screen has offered a ticket to k-town for many artists in recent times and the latest one to have his name in the ticket is choreographer Sandy. In fact, the movie is a mini Big Boss reunion with Reshma Pasupuleti, and Saravanan on board as well. Director Gautham Vasudev Menon has essayed an interesting part in the film. So, how has Sandy’s debut drama as an actor come out? Is it solid enough to chisel a lead hero image for the star in K-town? To know that let us get in to the movie review. 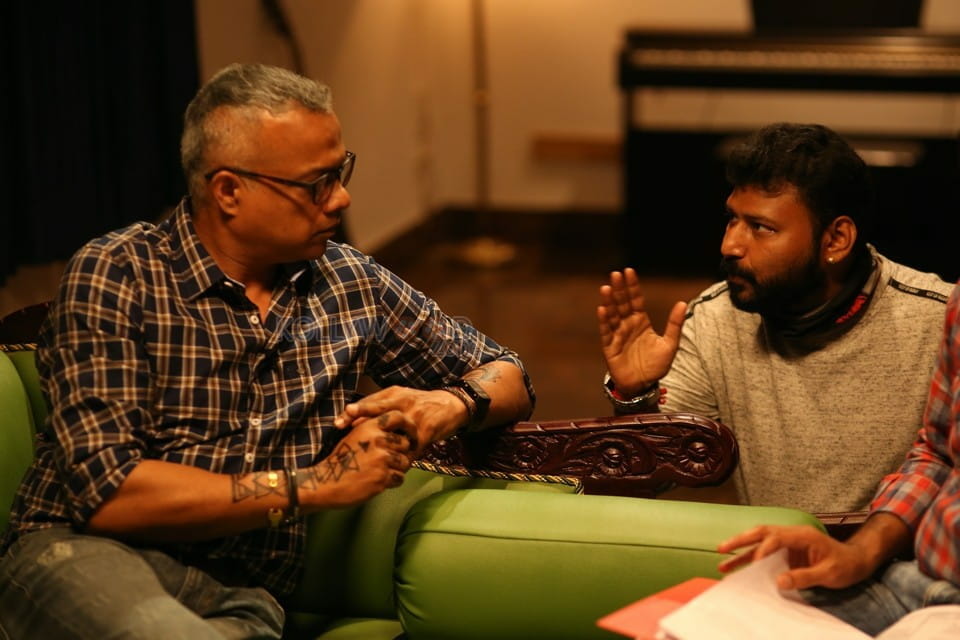 The film depicts the events that occur around a young man Kathir (Sandy). Kathir moves in to his new home along with his mother (Rama), his elder sister Devi (Reshma Pasupuleti), and her daughter Nivya. Kathir’s girlfriend (Shruthi Selvam) presents him a clock. He customizes it. Soon Kathir begin to experience eerie activities in the house. Particularly at 3.33. We are bestowed with the cliche scenes of a horror thrillers. Lights flicker, he hears mysterious voices, door knob open on their own, and he has nightmares. None of which the members of the family experience. The family go in search of a solution. A religious man tells them that there are bad vibrations in the house, while a doctor says that he suffers from a psychological issue. Which is true, is there a paranormal force in the house, or is Kathir suffering from a psychological issue, will he be able to find a way out and get to live a normal life, is what makes the rest of the flick.

Of late, many debutant story tellers that venture in to Tamil cinema come in with experimental projects and have fairly enjoyed a decent reception. Debutant film maker Nambikkai Chandru tries to do the same with 3.33. He has not done anything fancy with the plotline but he has made efforts to add interesting elements in to the plot with the budget constrains in mind to pique the interest of the audience. So, he brings in the spooky thing and the time angle. This has worked in favor of him to an extent. Largely in the first half of the film where he tries to lay the foundation for the story to unfold further. He mixes these two factors quite well to keep us guessing on is it a horror thriller or a psychological thriller. Whether it was an accidental occurrence or deliberately planned and executed writing strategy, it does get our attention and keep us invested in the movie.

Director Nambikkai Chandru has done the first part well. But unfortunately, as the film proceeds, he is deprived of ideas and seem helpless as to how to move the flick any further and the entertainer quickly loses stream. He gets repetitive. For instance, Kathir goes to bed, wakes up at 3.33, is scared and anxious, this literally plays in a loop for more than necessary. Also, filling up the paranormal portions with the cliches that we are so used to in Tamil cinema does not help either. Another hole in the already sinking ship is the shoestring budget. Fine it is understandable, but if you cannot even get your artists in to proper make up, does not matter how good your plot is, it is twice difficult to make it watchable.

Choreographer Sandy makes a solid debut as an actor. At no point he gives us the feel of a newbie actor. He is impressive in the character that is both serious and grim. Perhaps, our acquaintance to his jovial side augments a flavor to his performance. It would be interesting to see where he goes from here and his choice of films. Where is director Gautham Vasudev Menon in the film? Having him on the advertising medium turns out to be an attempt to only drive more audience to the theater. Actress Shruthi Selvam does not have much screen time. Still, she makes her presence felt. Big Boss fame actress Reshma Pasupuleti is adequate. The rest of the cast has delivered what was asked of them.

On the technical front, music director Harshavardhan Rameshwar’s songs do not stay in our memory for long. But his background score add value to the film. A predominant portion of the movie is shot inside a house but cinematographer Sathish Manoharan’s frames have ensured that the visuals are not too repetitive. Editor Deepak S Dwaraknath has emphasized the work of his colleague with his sharp cuts.

On the whole, with a little bit of supplementary creativity, tight screenplay and better budget Sandy’s debut drama 3.33 would have been a solid entertainer.