Director Santha Kumar has returned to the trade nearly after 8 long years following his first film Mouna Guru with a could not have asked for more intense and sociological thriller drama which explores the life of a henchmen like never before in Tamil cinema history and neatly presents the theory of karma. Magamuni also has a unique screenplay like a jigsaw puzzle demanding us to put it together, something Tamil audience has rarely experienced in recent times. If a story teller could come up with such kind of a plot only after 8 years of work, then it is really worth waiting for. Arya has delivered one of the best performances of his career which is going to last in the memories of the audience just like his character in Naan Kadavul. 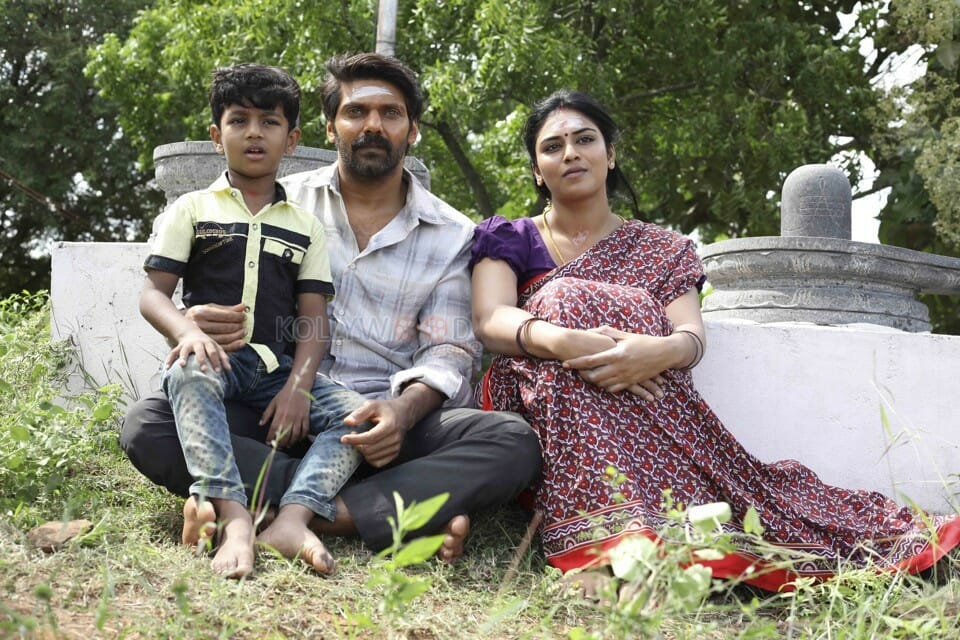 The film opens with Arya in a yoga pose just similar to the one in Naan Kadavul but just before you incline to think that you are in for a Bala’s sequel, Magamuni slowly opens up in its own style. Cutting in to the flashback, Magadevan (Arya) is a cab driver impatiently waiting in a signal. A Speeding vehicle crashes his rear view mirror. Naturally, Magadevan is infuriated and when he attempts to open his car door to apprehend the man he realizes  he is locked with vehicles encircled his car in the signal. At a later stage this scene puts in a nutshell the condition of Magadevan.

Later we get to know that Magadevan is not just a cab driver but also a henchman to a local politician Muthuraj (Ilavarasu). He plots picture perfect plans to carry out murders without leaving an iota of evidence in the scene of crime. Magadevan is loyal to the core to Muthuraj who just uses him for his expertise in drafting plans for assassinations. Apart from his job Magadevan’s life majorly gyrates around his wife Viji (Indhuja) and their five years old son. Trouble brews in when a brother of a man who had been killed in the murder sketch that Magadevan had drafted learns about him and seeks vengeance. Going after Magadevan he manages to hurt him. Now in order to take out the men who are after him Magadevan needs men power and cash. But he has run out of cash and Muthuraj who has a payment due to Magadevan would not give him the cash unless he agrees to draft one more murder sketch which further makes his situation intricate.

Besides this plot there is a parallel plot of Magadevan’s estranged brother Muniraj (Arya) who gets separated from him due to fate and grows up in the house of an underprivileged caste in Erode. Muniraj is contrast to his brother who educates himself and does organic farming for a living. He is an adherent follower of Swami Vivekanda’s principles and leads a disciplined life so much so that he spends his free time by educating kids hailing from economically backward families. Trouble arises when he befriends a journalism student Deepa (Mahima Nambiar) a democratic individual who hails from a privileged caste in the village. This does not incite a good reaction in Jayaraman (Jayaprakash) the casteist dad of Deepa and he starts to trouble Muniraj. The lives of totally contrasting brothers entwine at one point and how it impacts each other is what makes the crux of the movie.

Magamuni is not any different from the crime dramas that we have witnessed in Tamil cinema but it is the way of narration that makes Magamuni standout from its counterparts. Right from the start of the drama director Santha Kumar keeps throwing his jigsaw puzzles one after another to us which keeps us speculating to solve the mystery that he has crafted. Santha Kumar manages to do this till the very end where he finally reveals the answers for all the questions one by one.

This is simply the career best performance of actor Arya who had previously given us a glimpse of what he is capable of in Naan Kadavul. He has depicted the character swop between an angry young man and a man who lives by principles in a fabulous way. He deserves to be commended for opting to do such an intense drama in the first place and also for accomplishing the taken up responsibility in the optimum way possible. Indhuja Ravichandran does not have much scope to perform but has delivered what was asked of her. Mahima Nambiar has delivered a good performance in the character of a forward thinking woman. The rest of the cast of the flick have added strength to the drama with their impressive performances.

On the technical front, editor Sabu Joseph has done a mammoth task of editing a complex flick such as this whose one of its strength is its screenplay. S. S. Thaman’s music adds intensity to the already intense drama while cinematographer Arun Bathmanaban’s frames have helped to capture the film in a novel mode.

Director Santha Kumar seems to have taken ample amount of time in scripting every character in the drama which is crafted with depth and intensity. Opting to avoid lazy and comfortable writing and embarking on a complex writing has yielded best results for the film maker.

On the whole, Magamuni is simply the career best film of actor Arya and a good intense life crime thriller which is very infrequent in Tamil cinema.