In a time when many minimalistic budget projects get a fair share of attention in Tamil cinema Super Duper’s release was well timed to capitalize on the factor. But the venture turns out to be a disappointment to the audience with its weak storyline and amateurish execution. There are times when you badly want to walk away from the theater right in the middle of a film. Super Duper is a film which falls in to that zone. Though the plot is developed with the modus operandi of romance, comedy, crime, suspense, and twists, the mediocre work in almost every department has made the flick just look like a protracted YouTube video.

Sathya (Dhruva) is a youngster who along with his uncle Shiva (Shah Ra) does small burglaries to make a living.  On one occasion they mistakenly abduct Sherin (Indhuja) who is already embroiled in a big trouble. But as it always happens in Tamil cinema love brews between Sathya and Sherin. Sathya and Shiva learn that Sherin is wanted by a mysterious and dreadful kingpin of a drug ring named Michael (Adithya Shivpink). Then there is a cop named Vikram and a gangster with the name Vedha, yes you guessed it right but no points for it. Did Sathya and Shiva save Sherin from the drug kingpin, and who is this dreadful kingpin is what makes the rest of the story. 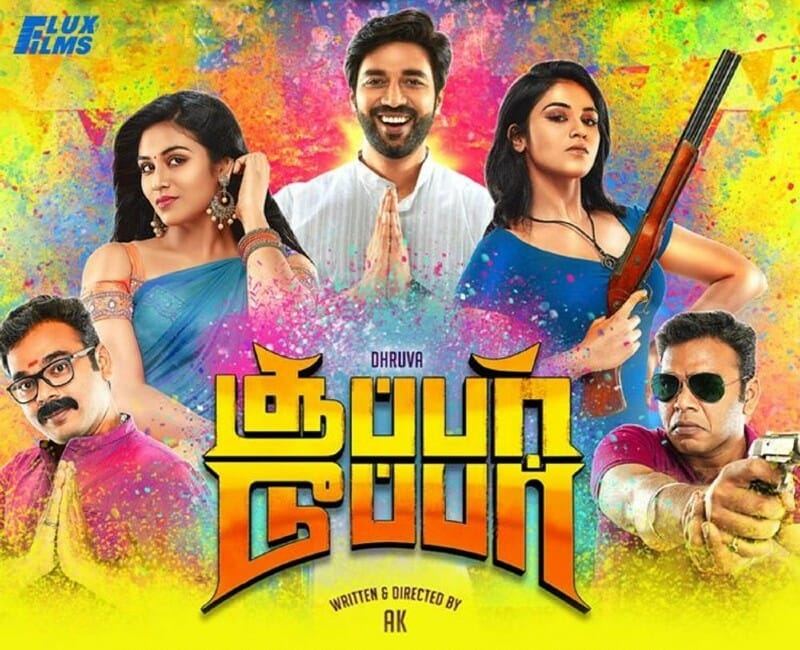 To be fair, the attempt to present the film in a comic book style narrative is fresh to Tamil cinema and deserves to be commendable. But when you do that without a proper story and film making techniques, Super Duper is what you will end up making. There are a bunch of famous dialogues from popular films dragged in to the flick and the purpose of doing that is hard to comprehend, in fact mysterious.

Actor Dhruva has delivered a very average performance and on some moments the actor looks like he has no clue what he is doing up there in the frame. After critically acclaimed performance in Meeyatha Maan actress Indhuja has essayed the lead role in Super Duper. The actress has bagged a central role in the entertainer but the character does not have much depth to perform and the actress seems to be quite uncomfortable in portraying the slightly glamorous portions of the role. Shah Ra who was brought on board to provide comical relief has failed to do his job except for few one liners which induces laughter in us. Adithya Shivpink who comes in as the antagonist of the film seems like a half cooked YouTube star.

On the technical end, nothing seems to have gone right for the film including the technical departments of the entertainer. Except background score for few portions Divakara Thiyagarajan music does not help the flick in any way. Thalapathy Rathnam and Sundar Ram Krishnan’s frames make the film even obnoxious to watch.

Director Arun Karthik seems to have gotten in to the notion of entertainment way too much where fun happens to be the solo driving force behind the film and not the story. Something the films hitting the theaters lately seem to have as their agenda. But to accomplish that feat the characters of the film must be well written and rooted which director Arun Karthik seems to have totally neglected. If the film maker had put more efforts in planning the comic narrative bit creatively and in crafting his screenplay neatly, Super Duper might have been a good entertainer.

On the whole, though Super Duper’s comic book style narration deserves to be commended, poor writing and amateurish film making has sung the film in to the abyss.