It is quite normal for an actor to turn in to a story teller in Tamil cinema to exhibit his story telling prowess to the audience. The latest actor to get in to the list of actors turned directors is actor Bose Venkat who has been in the industry for some time. He has built a script around few real life incidents which he himself had witnessed in his life before becoming an actor. These real life incidents in the form of Kanni Maadam attempts to lay out the horrific nature of caste and honor killing, and how it affects youngsters who fall in love disregarding their caste. The 2004 released melancholic love drama Kadhal effectively managed to elaborate on the issue though it slightly had a different tone. After Kadhal, though many films have hit the screens intending to explore the above mentioned issues, they have found it hard to do that without the tincture of Kadhal in them. And Kanni Maadam is not an exception to it. 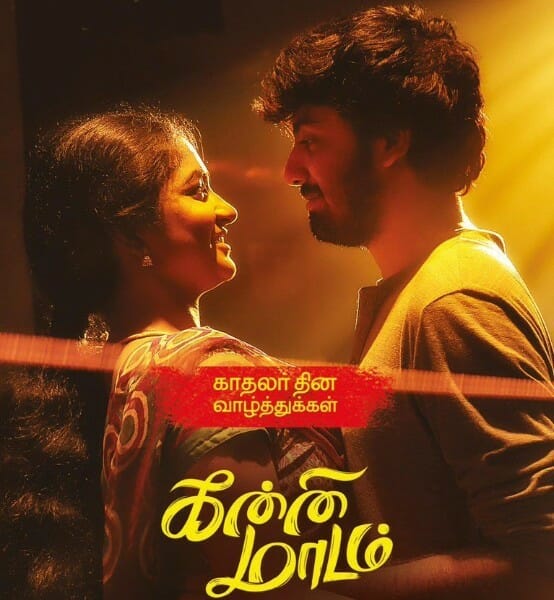 The film opens with a young couple Malar (Saya Devi) and Kathir (Vishnu Ramasamy) eloping from their home town Madurai fearing the wrath of Kathir’s relatives who are after them to slay them and reinstate their caste pride as Malar belongs to an unprivileged caste. The couple lands in Chennai where they bump in to an auto driver Anbu (Sriram), who leads a simple yet happy life with his friend Shankar (Aadukalam Murugadoss). Later, coincidentally the couple rents a house in the locality where Anbu lives. Slowly the couple begins to settle in their new life and in process starts a friendly relationship with their neighbor Anbu. Meanwhile, Kathir’s relatives arrive at the city in search of them.

When everything seems to move smoothly for the couple, one day Kathir ends up dead in a gruesome road accident. The incident disrupts Malar mentally and makes life difficult for her. Things further get complicated when she figures out that she is pregnant. Seeing the tragic situation of Malar, Anbu along with his friend Shankar come to her rescue and aids her to shift to a new locality. But the house owner of the house mistakes Anbu as Malar’s husband. While Anbu aids Malar to reconstruct her life trouble brews in to their life in the form of Kathir’s father (Gajaraj) who has come out of prison on parole. What will happen of Malar, will Anbu manage to save her from Kathir’s father, is what makes the rest of the flick.

Bose Venkat has attempted to make his mark as a story teller by addressing a very complex and contemporary issue through his debut film and has achieved that to an extent. Generally, when taking up issues like this to craft a drama one cannot help but allow the flick to incline in to the melancholic tone. Director Bose Venkat goes a step ahead and further intensifies the melancholic tone by killing off one of his main characters at the most crucial phase of the flick. What follows is pain and grief scene after scene which wears out the audience and gets tedious. Not sure if that was the intention of the film maker. Then after a point the flick gets in to a painful life drama and evades from the core issue that it intended to explore.

Kanni Maadam seems to be very promising when you just look at the plot but the treatment that it has undergone has diluted its potential drastically. At times, the drama progress pointlessly just as few characters in the flick. Seems like the director has had a dilemma between setting his objectives as to whether to carry forward the flick as an issue based film or mould it as a painful life drama with a beautiful resurrection after a fatal fall in life. In that dilemma he has ended up crafting a film which tries to accomplish both. The result, it has fallen short of crossing the line in neither. Also, the predictability factor does not help in keeping the audience invested. To add to all these factors the collapse in the technical aspects of the flick has further weighed down the drama.

Actor Sriram Karthick fights hard to pass off with his performance and is evidently ineffective in the crucial emotional moments. Actress Saya Devi delivers a decent performance in a very demanding tragic role. Vishnu Ramasamy makes his presence felt even in a short screen time. Comedian Aadukalam Murugadoss offers temporary relief with his timely one liners and expressions. The rest of the cast has delivered what was asked of them.

On the technical front, the technical department has not delivered to lift the flick either, with musician Hari Sai’s music begin moderately the best of all. Followed by cinematographer Eniyan’s middling camera work which is made bearable by editor Rizaal Jainy’s scissor work.

On the whole, with clarity in objective of what it intends to deliver, better screenplay, and technical support Kanni Maadam could have been a watchable entertainer.