To start with, Chithirai Sevvaanam lacks a gripping story. The contemporary issues seem to be just used as a catalyst to induce sentiments. The film turns unnecessarily melodramatic trying to play us by the emotional game. These portions look coerced in to the plot. They make Chithirai Sevvaanam look like a film trying to cash in on these sentiments rather than genuinely being concerned over them.

This is an era of freshers in Tamil cinema and we have had so many debutant film makers opening their innings in k town this year. Now, we have a new entry to that list. Tamil cinema’s leading stunt man Stunt Silva turns director with Chithirai Sevvaanam. Surprisingly, he has not gone for the mass action genre that he is popular for as a Stunt choreographer and actor. He sticks to discussing about contemporary social issues on his debut movie. To do that he ropes in the right man in town, actor Samuthirakani. If not Samuthirakani who else to better depict a role that stand up for a cause. The story is penned by writer Vijay. So, how has Stunt Silva’s debut venture come out? Will the entertainer go on to mark his directorial debut to be a memorable one? To know that let us get in to the movie review. 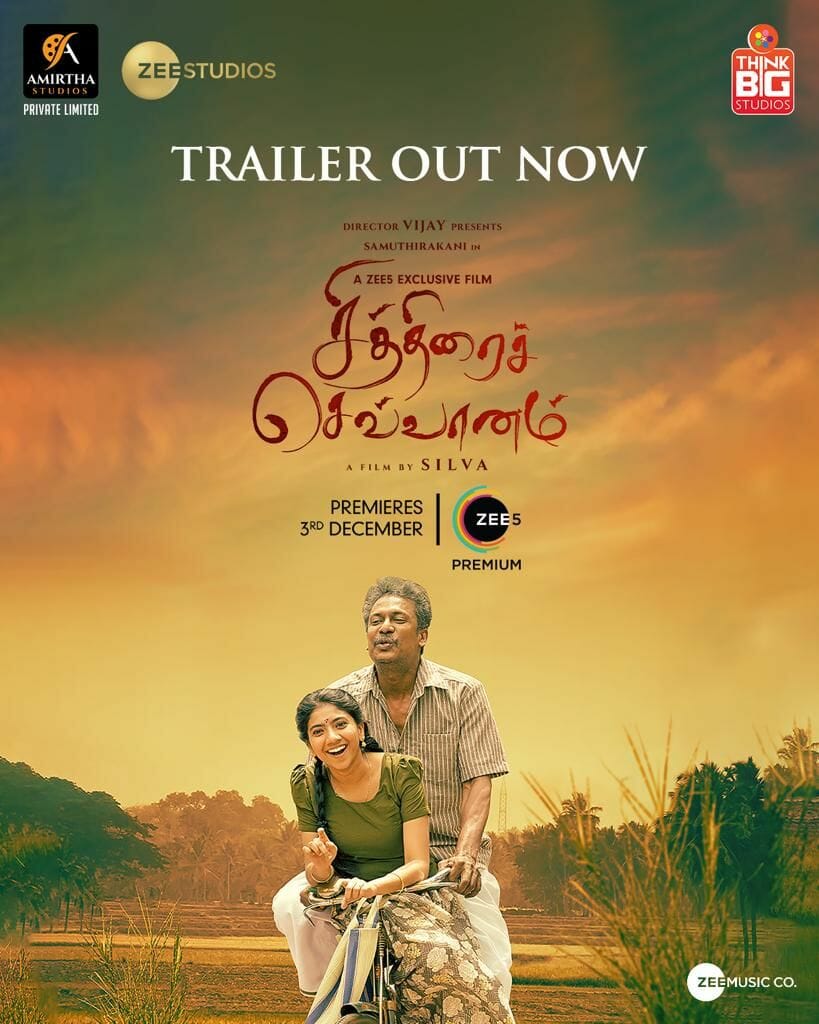 Chithirai Sevvaanam follows the life of Muthupandi (Samuthirakani), a doting father and his daughter Aishwarya (Pooja Kannan). Muthupandi is a small-time farmer in a village in Pollachi. Despite his financial barrier, his only desire in life is to make his daughter a doctor. Aishwarya is also equally motivated to walk the herculean path. Becoming a doctor is not just an ambition for the duo. There is an emotional connect to it. When Aishwarya was young, the family had to suffer an irrevocable loss with the unexpected demise of her mother. Her life could have been saved if they had had sufficient medical aid in their village. This tragic loss leaves a deep scar in both Muthupandi and Aishwarya. Muthupandi nurtures in Aishwarya the aspiration of studying for doctor from a very young age. To upkeep her father’s dream, she works hard and bags the top spot in her district in the twelfth standard examination.

Before the father-daughter duo could take any joy in her achievement, they learn that the years of hard work isn’t sufficient. And that Aishwarya should clear the NEET entrance examination in order to secure a MBBS seat. Aishwarya’s principal tells Muthupandi to enroll her in a coaching center that prepare students for the exam. Muthupandi puts his kid in a center far from home. Aishwarya stays in a hostel to take up the training program. Little did she know that her stay in the hostel will alter her life upside-down. Few boys from influential families harass her. They invade her privacy and shoot a video of her while she showers. They upload it to the internet. It gets viral. Upon coming to know of this, Aishwarya disappears. Aasha Nair (Rima Kallingal), a cop takes charge of the investigation.

Muthupandi is informed of these developments. Leaving everything abruptly, helpless Muthupandi rushes to find out what happened to his daughter. Together Aasha Nair and Muthupandi go after the perpetrators. Will they be able to bring the criminals to justice, and what happened to Aishwarya, is what makes the rest of the flick.

Director Stunt Silva, the rough and tough man of Kollywood has made effort to show the world his other side by cooking up an emotional drama in Chithirai Sevvaanam. Through the drama he aims to rise his voice against violence unleashed on women. He takes up one of the most brutal and callous events that shook Tamil Nadu few years back and has mashed that up with another ongoing political issue NEET and has made Chithirai Sevvaanam. The social commentary is not confined within that spectrum. He wants to point us to the fact how this young generation is susceptible to the advancement in technology. Indisputably, Stunt Silva has his heart and foot in the right place. But is that enough to save an entertainer with a run time of solid two hours? Absolutely not. To start with, Chithirai Sevvaanam lacks a gripping story. The contemporary issues seem to be just used as a catalyst to induce sentiments.

We do not know much about the family the film is centered around. The happy family moments, the bond between them, we get to see nothing. We are just told so and so, and so we are here. Screenwriter Vijay has tried to have a character arc for Samuthirakani. Throughout the first half he comes across as a helpless father trying to figure out what happened to his daughter. But in the second half he takes a slightly aggressive path when he goes after the culprits. This transition is the make or break moment of the flick. But it happens just like that and pass by without having any prominences. The film turns unnecessarily melodramatic trying to play us by the emotional game. These portions look coerced in to the plot. They make Chithirai Sevvaanam look like a film trying to cash in on these sentiments rather than genuinely being concerned over them.

Actor Samuthirakani is custom built for a role like Muthupandi. He pulls of the role effortlessly. Actress Rima Kallingal’s character has been underwritten. She does not have much to offer to the proceedings. Actress Pooja Kannan has done justice to her role. The rest of the cast has delivered what was asked of them.

On the technical front, music director Sam C. S songs are not inspiring. But he shines in bits and pieces with his background score. Cinematographer Manoj Paramahamsa could have been better given the story is set at the backdrop of scenic locations. Editor Praveen K. L has done a fine job with his sharp scissors.

On the whole, with a gripping story and a proper screenplay Chithirai Sevvaanam could have been a much better social drama.