The story of Karuppan has nothing new to offer as the whole film seemed not just familiar but also entirely predictable. Vijay Sethupathi and Bobby Simhaa have done a credible performance. The screenplay becomes the drawback of Karuppan. It stretches too much, putting unnecessary and boring songs here and there. Let’s hope Karuppan becomes a worthy start for a different ‘mass hero’ character in Kollywood.

Karuppan is a masala movie. It has all the right ingredients to pull the mass and leave a satisfied audience in the end. It’s quite generic in its appeal but somewhat engaging and fun. This movie was designed to show that Vijay Setupathi has all the abilities to blend into a masala movie, pulling as much of the audience into the cinema halls, with his own star power. This time it is a rural set-up. And Vijay Sethupathi with his charm and shifting personality made this rural-entertainer a pleasant and worthy watch. 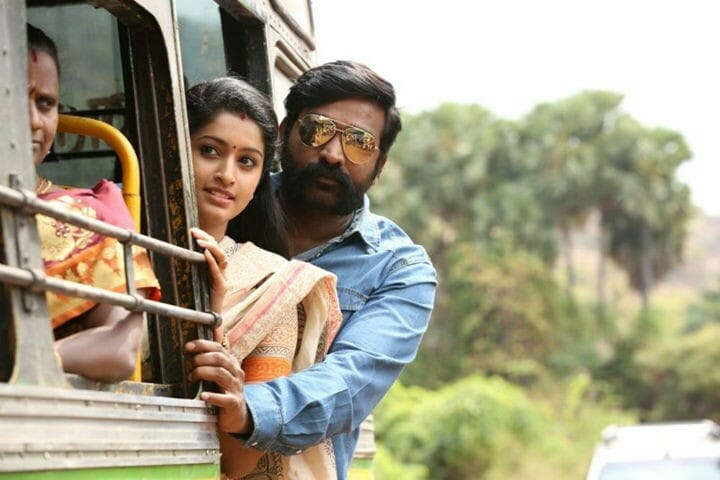 The story of Karuppan has nothing new to offer, as you have seen the same story a number of times before. The hero, Karuppan, played by Vijay Sethupathi is a Jallikattu enthusiast, taking part in a number of village contests on the same. In one of these events, Maayi (Pasupathy) agrees to marry his sister Anbu (Tanya Ravichandran) to Karuppan if he manages to tame his ferocious bull. It is the characters that make an enduring impression on us. Director Panneer Selvam, etches each character with a life that makes the movie a worthy watch. Anbu and Karuppan ends up getting married that ultimately annoys Kathir (Bobby Simhaa). The family drama that ensues from now on forms the basic narrative of the film.

The film is a testament that Vijay Sethupathi is hands down one of the best actors around. Thanks to his choice of characters in the movies, he is gliding his way to the top tier of Kollywood actors. He has the power to flesh out the characters that he portrays on screen with a sensibility that can generally be tagged to his caliber. Vijay Sethupathi’s natural flair and charm add more quirks to the character. And Karuppan allows him to add a more emotional dimension to his characters. However, the fight sequences seem a little weak compared to the rest of the performance.

The films scores its biggest point by upholding all the aspects fop a family movie, and based on its structuring the director perhaps wanted to pull that crowd for the film. However, this came with its own downside, as the whole film seemed not just too familiar but entire predictable. This is why the film lacks punch despite having all the elements needed for a masala movie. And that is perhaps the fault of the director as the actors gave a genuine performance.

Apart from Vijay Sethupathi, Bobby Simhaa also came out with a credible performance, making us believe in his character. Even the character of Anbu has been given a fantastic plot bearing story, she isn’t just an object of affection, she has a mind of her own and holds her space. It was pleasing to see such a strong character being structured for her, in an otherwise male-dominated film, and Tanya certainly did a massive justice to it.

The screenplay becomes the drawback of Karuppan. It stretches too much, putting unnecessary and boring songs here and there. A good editing would have highlighted the movie more. Let’s hope Karuppan becomes a worthy start for a different ‘mass hero’ character in Kollywood.

Gautham and Karthik to Share Screen Space for the First Time