Rarely have there been an adult comedy where the filmmakers have been able to establish a good film, without going down the path of sly and disgusting comedy, lined with sexist, misogynist and other regressive jokes. Hara Hara Mahadevaki is no exception.

Hara Hara Mahadevaki is an adult comedy, but how you may ask? It is adult comedy in the sense that the comedy that it so boasts about, involves a few double entendres and sight gags. Other than these, the film is nothing but a box full of mindless comedies that have come and gone so many times in this film industry. It offers nothing new, nothing special. Hara Hara Mahadevaki, directed by Santhosh Jayakumar is designed after that Whats App Swamiji, who became quite popular few years back. 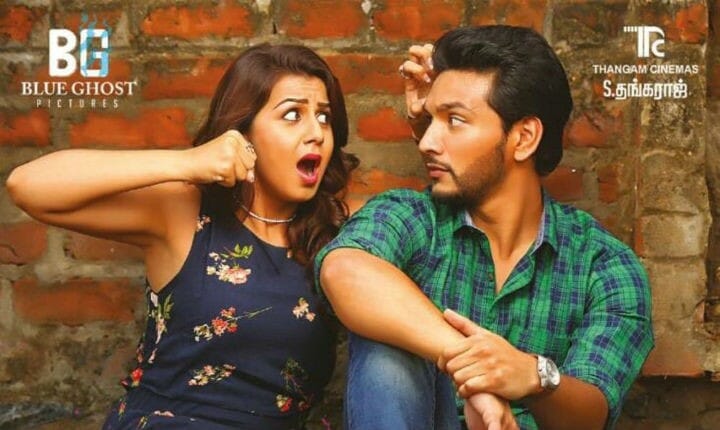 The movie, as stated has all the needed masala to fulfill the tag of this genre. It has the needed sexual innuendos, ambiguity in the phrases, double entendres, and visual comedy that may be fated and/or accidental, kind of like slapstick, but poorer. But it is average in every other sense, using run-of-the-mill content for the film, making it extremely average film.

The film stays close to a very basic premise. Hari (Gautham Karthik) runs a funeral service and Ramya (Nikki Galrani) is a college student. Both of them are on the verge of a breakup. In lieu of this they have decided to settle their assets and return everything that they owe to each other. . Meanwhile, a couple of other parties get roped into this story. A politician (Ravi Maria) plots a bomb blast to earn sympathy of the masses and hires two moronic criminals (Rajendran and Karunakaran) for the job. There is a fraudster (Bala Saravanan) who tries to earn some quick bucks by circulating fake currency. And a child goes missing in a resort prompting a cop (RK Suresh) to catch the kidnapper who has walked away with the ransom money. At the end, everyone ends up in the resort, creating a quite usual comic scenario, when all of their bags get mixed up as conveniently, all of them looks the same.

This makes up for an amusing climax, however, the frustrating bits of the film, overcomes most of the experience. For the most part of the film, director Santhosh tries to stick to the silly stuffs that one can rarely pass as a joke. The writing is the biggest downfall of the movie, as the jokes, narration, and the dialogues are so clichéd and been-there-seen-that, you will hardly find anything new to laugh at. You have seen all of them and quite frankly, we deserve better. The actors do try their best to bring out some laughs, but the writing betrays them, with the same idea repeatedly used in the film, the scenes come out as nothing but flat.

Also for an adult comedy, the jokes are quite juvenile, making silly remarks that we know are not at all appropriate for the contemporary time. Watch Hara Hara Mahadevaki, only if you have to, otherwise you can spend that time doing something productive.