Vanam is billed as a horror thriller but where is the scare and where is the thrill. Even a jump scare here, and a thrill there could have done. But we are robbed of those possibilities as well. It seems like director Srikantan Anand had a dilemma as to whether keep the flick as a thriller or a horror thriller.

A horror thriller yet again in Tamil cinema. At a time when the horror angle, which seemed like it was hitting the eternity zone, is gradually fading away, story teller Srikantan Anand sends in his horror eco thriller drama Vanam. Actor Vetri Sudley plays the lead while actors Anu Sithara, Smruthi Venkat, Vela Ramamoorthy are in the supporting roles. Actor Vetri Sudley’s choice of films have been interesting right from his debut entertainer 8 Thottakkal, which was followed by Jiivi, and Care of Kaadhal. So, how has his latest eco thriller Vanam come out? Will it reinforce the reputation that he has earned for himself in picking unique projects? To know that let us get in to the movie review. 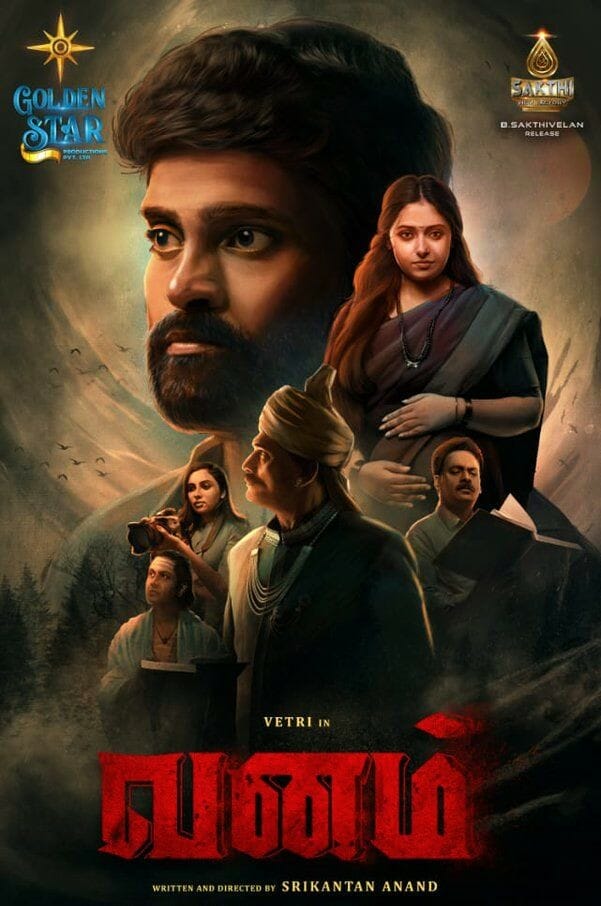 The film, for a predominant portion happen inside a men’s hostel. When Vanam opens we are presented with few construction workers working a derelict men’s hostel. After the day’s work one of the men opts to stay back at the place. In order to have company, he rings up a woman and asks her to come to the place in a coercive tone. When she hesitates, he resorts to blackmail. With no other choice, the girl agrees to come, and he ends the call. Suddenly, things get uncanny and the room turns spooky. The man is scared to death. Cut. The girl arrives at the spot and finds it locked. She breaks and enter the room only to find that the man has hung himself. She approaches the hanging body and abruptly the dead man opens his eyes. Bam! We have the title card.

When the title card ends, we get to meet Magizh (Vetri Sudley), an arts college student in a collage that is located near a forest range. He resides in the college hostel along with his friends. The room in which the man committed suicide has been allotted to them. His childhood crush Jasmine (Smruthi Venkat) comes to his college to shoot a documentary film on the sculptures. They both catch up. And yes, it is time for some romance. Magizh begins to experience paranormal activities in the hostel. Subsequently, his friends are killed under mysterious circumstances. Magizh and Jasmine decides to figure out the reason behind their deaths.

When they begin their investigation, they learn the place was built by a Zamindar (Vela Ramamoorthy), who was a serial sexual offender. Meanwhile, we have a tribal woman (Anu Sithara), the savior of the forest moving around the place. Why were Magizh’s friends murdered, do the Zamindar and the tribal woman has anything to do with it, is what makes the rest of the flick.

The plot of Vanam is not something that we have not watched already. It is the same old reincarnation of souls seeking revenge to the injustice unleashed on them, spooky environment, and a couple of murders. But director Srikantan Anand would not let his flick to just slide down with cliches. So, he adds few elements like a magical mirror that shows people’s past, a woman safeguarding the forest, he tries to interweave the past with present, he brings on the ecofriendly perspective, and a twist in the tale towards the end to hold our attention. They do work in his favor and these elements pique our interest. But unfortunately, that alone cannot save a drama with a running time of two solid hours. What Vanam lacks precisely is a gripping story to workout all these ideas.

Vanam is billed as a horror thriller but where is the scare and where is the thrill. Even a jump scare here, and a thrill there could have done. But we are robbed of those possibilities as well. It seems like director Srikantan Anand had a dilemma as to whether keep the flick as a thriller or a horror thriller. The scenes which are meant to evoke a feeling of fear or shock are so cliched that even kids are not scared of them anymore. If the horror cylinder struggles to keep running, the thrill cylinder does not even get started. The predictability is culpable here. Story Srikantan Anand’s writing is so predictable that at no point the flick gives us a brain teasing moment. The final nail in the coffin is hammered by the characterization. We really do not connect with the lead characters to root for them. We do not get to know anything about them and they are simple two strangers going about their work.

Actor Vetri Sudley seems to be getting repetitive with his expressions. At times he looks clueless of what he is supposed to do. He just about manages to sell Magizh. Actress Anu Sithara is gorgeous and is apt as a forest angel. Actress Smruthi Venkat struggles even in a role with much less complexities. Actor Vela Ramamoorthy is stunning as usual even in a role that does not give him much space to perform. The rest of the cast has delivered what was asked of them.

On the technical front, music director Ron Ethan Yohann adds value to the movie with his enjoyable music. His tracks are decent while his background score helps in setting the mood. Cinematographer Vikram Mohan has covered the drama from best angles. Editor Prakash Mabbu’s cuts should have been a lot shaper.

On the whole, with little work in the writing department Vanam could have been a much better flick but now it just ends up as the weakest film in actor Vetri Sudley’s filmography till date.