When you extract the one line of the flick, it is nothing special, and it is the same old revenge tale. But Kadaseela Biriyani is largely entertaining because of how it presents the revenge angle. Unlike most of the drama the flick does not just limit the revenge to the planning and killing. Story teller Nishanth Kalidindi gives his story a touch of reality.

Often, it is the unexpected underdog small budget flicks that has given us a refreshing cinematic experience. Kadaseela Biriyani is one such drama that takes us on a fine journey and when it is nearing the end, we wish for the ride to last a little longer. Debutant director Nishanth Kalidindi has helmed the drama and it is literally one of the best debuts in recent times. The film is about three brothers who go on a quest seeking revenge for their murdered father. So, what does Kadaseela Biriyani has in stores to make it a special experience? To know that let us get in to the movie review. 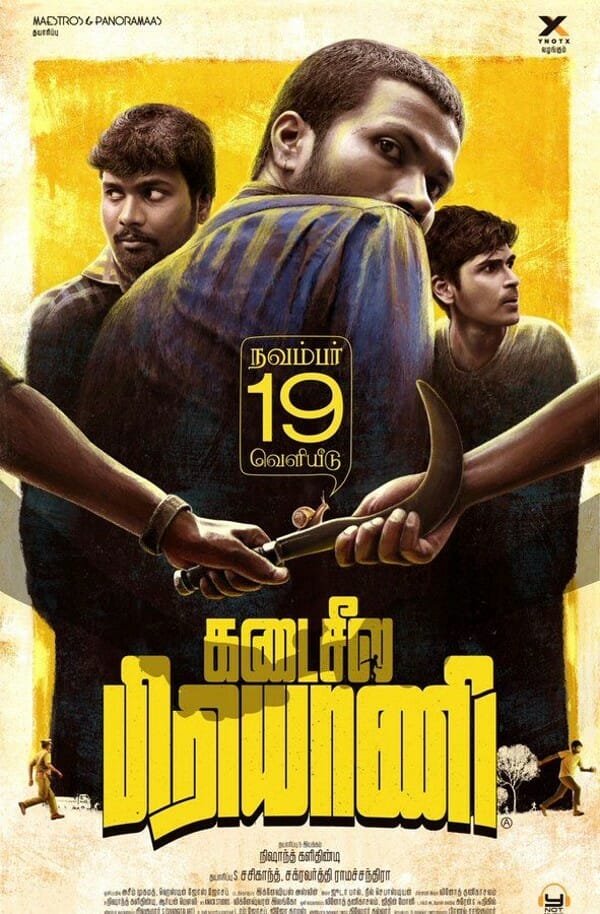 Kadaseela Biriyani is centered around three brothers, elder brother Periya Pandi (Vasanth Selvam), middle one Ila Pandi (Dinesh Mani), and the youngest brother Chikku Pandi (Vijay Ram). When the film begins, we get a voiceover in the voice of Vijay Sethupathi, giving us the gist about the family the brothers hail from. We are told that their grandfather was a bandit, and when he died their mother (Stella) took over the family business. Unlike their mother, their father is a peace-loving man and is sick of the violent nature of his wife. At a point he takes Chikku Pandi and moves to a quieter village away from the family. Chikku Pandi grows up with his father who wants him to lead a normal life. However, fate rolls its dice. In unfortunate turn of events his father gets murdered. With no place to go Chikku Pandi returns to his mother’s place.

His return does not evoke a happy reunion mood in the family. And little does Chikku Pandi know that his return to his family would change the entire course of his life. Their mother who could not have cared any less for their father when he was alive, place a demand to her sons, that his death must not go unavenged. Chikku Pandi is least interested in avenging his father and simply wants to have a peaceful life like his father desired. But succumbing to the pressure of his mother, he agrees to go with his brothers on their hunt to hack the man who killed their father. The man is a bigshot who calls the shots in a village in Kerala. So, they concoct the most brilliant plan – to get in to his own den and slay him. They do accomplish the mission. But now they must get away from his violent psychopath son Johan Kariya (Hakkim Shahjahan). Will they get away from him or even go after him, is what makes the rest of the flick.

If dark comedies are a delight to watch, dark comedies based on crime are a double delight. After a long time in Tamil cinema, it was Nelson Dilipkumar’s Kolamaavu Kokila that reminded us of the genre. Recently we had Doctor, and now Nishanth Kalidindi’s Kadaseela Biriyani. It has taken three solid years to have another drama in this genre. Simply this equation tells us how difficult it is to construct a dark comedy. Good timing sense is enough for a comedy to land well, but that is not the case with dark comedies. Dark comedies are more demanding. The staging of situations, impeccable timing, performances of actors, the expressions, the angle from which it is captured, and the background score syncing with the mood of the scene. Everything must fall in line to get a dark comedy to work. Debutant film maker Nishanth Kalidindi’s Kadaseela Biriyani ticks most of the boxes almost for a good portion of the film. Thanks to Nishanth Kalidindi’s writing and his imaginative staging.

When you extract the one line of the flick, it is nothing special, and it is the same old revenge tale. But Kadaseela Biriyani is largely entertaining because of how it presents the revenge angle. Unlike most of the drama the flick does not just limit the revenge to the planning and killing. Story teller Nishanth Kalidindi gives his story a touch of reality. When it comes to avenging, we are habitually used to individuals or a group operating on a singular mindset. But what if one of them in the group is least interested in extracting revenge and is forced to do it without choice? It is this contradictory slant that makes space for setting up crafty situations for dark humor.

On the down note, the film is cold and violent and it might generate different feeling among a sect of audience. But beyond everything, director Nishanth Kalidindi undeniably has made an interesting debut and it would be interesting to see what his sophomore flick would be. Is he going to continue in this path he has just stepped in and go on to product a trademark for himself? Or is it just a onetime treat?

The casting is one of the major strengths of the drama. Actor Vasanth Selvam scores effortlessly as an enraged young man. Actor Dinesh Mani is effective. Actor Vijay Ram is brilliant. Look out for the scene where his transition from innocence to violence happens. Actor Hakkim Shahjahan is the show stealer. He is apt as an impulsive psychopath. The rest of the cast has also delivered an impressive performance.

On the technical front, music directors Judah Paul, Neil Sebastian, and Vinoth Thanigasalam together have added a lot of value to the drama. Their tracks are enjoyable. The background score is a fine work of art. Cinematographers Jaison Jacob John, Hestin Jose Joseph, and Azeem Mohammad have covered the flick from all possible best angles. Editor Ignaitious Aswin’s sharp cuts enhances the work of his colleagues.

On the whole, Kadaseela Biriyani is a fine dark comedy thriller that falls on the must experience film category, in particular, if you are a fan of the genre.