Not often in Tamil cinema that you get to watch a flick that totally make you feel pity or empathize for people who just depict the roles in the film. Thozhar Venkatesan, is one such rare film which evokes the very last bit of empathy left in you and breaks your heart by bestowing the fact on you that it is inspired by real life incidents. Scripting a script such as this really needs exceeding echelon of compassion, courage, poise, and above all altruistic nature. Guess Mahashivan encompasses all the above quality in him. 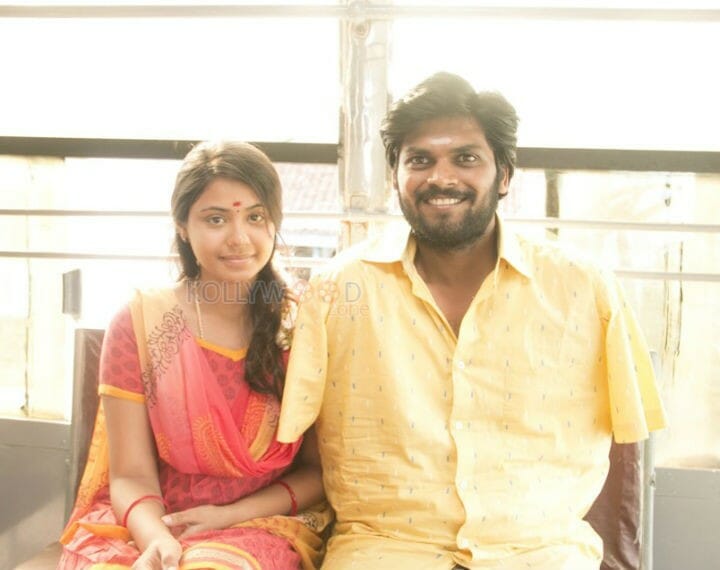 The film opens with physically challenged Venkatesan (Harishankar) filing a police complaint seeking to find his vehicle. When the police man asks for the details of his vehicle, Venkatesan’s outline about his vehicle takes them aback. Like the peculiar Vadivelu’s ‘kaenatha kanam’ case he says that his government bus has been stolen and asks them to locate it. But unlike Vadivelu’s case it is not a comedy scene and in fact Venkatesan is very serious about it. Going in to details of how he got the bus under his name, Venkatesan begins to narrate a flashback to the cops.

Venkatesan, a young and energetic man who runs a soda business in the village considers himself as a self sufficient owner and is very content with the life he leads. His path accidentally crosses Kamali’s (Monica Chinnakotla) and inevitably they both fall for each other. But what is beautiful about the love track in Thozhar Venkatesan, is that it does not make you feel like a forced romance track added up for commercial purpose. Instead it is wonderfully woven in to the plot. When everything seems to go well in life for Venkatesan, in an unfortunate event he meets with an accident which is caused by a government bus and loses his hands. Venkatesan files a case. After years of trial and adjournments, the verdict comes in favor of him. The judges direct the government to provide him a government bus as compensation to the loss created by a government bus. Now, that bus is lost, what happened to the bus, will Venkatesan find his lost bus, is what makes the rest of the story.

Hari Sankar has put on a decent performance and so is Monica Chinnakotla. Both the actors have delivered what was asked of them while rest of the cast has delivered an okayish performance.

Deva Selvam’s frames set the tone for the film particularly in romance sequences. Sagishna Xavier scores are not notable but are not too bad either.

Director Mahashivan’s gamble of not dragging the film in to a complete melodrama tone has yielded positive results. The film has its share of humor too, so that the audience will not be jaded with the theme of the film. The razor sharp dialogues not too stretchy but befitting to the situation impresses the audience. The climax of the film has the entire burden loaded waiting to be unleashed up on us which leaves us spellbind and takes few seconds to return to the normal state.

On the whole, Thozhar Venkatesan is a rare kind of gem that you get in Tamil cinema which makes us to relate to the daily happenings of the society to which we often turn our blind eyes to.