After innumerable delays and date change, Aayirathil Iruvar, finally releases. It is disheartening, to see the film deliver so little, after such anticipation build around it. Going to the theatre with a lot of expectation certainly backfired, as the film is unremarkable at its best.

It is well ordained that the movie had a lot of internal issues that caused its delay. This romantic action entertainer provides everything that its genre promises, but somehow it doesn’t take much time to shed the memory of the film, as soon as you stand up from the seat. The film follows the very common, boy meet girl, romance plot. Here you have a boy who wants to earn money. His dreams are big and he being smart does add a momentum. However, as you will expect, the boy falls in love with a woman and wants to marry her. This is a very common narrative that you had, have and will see in a number of films. 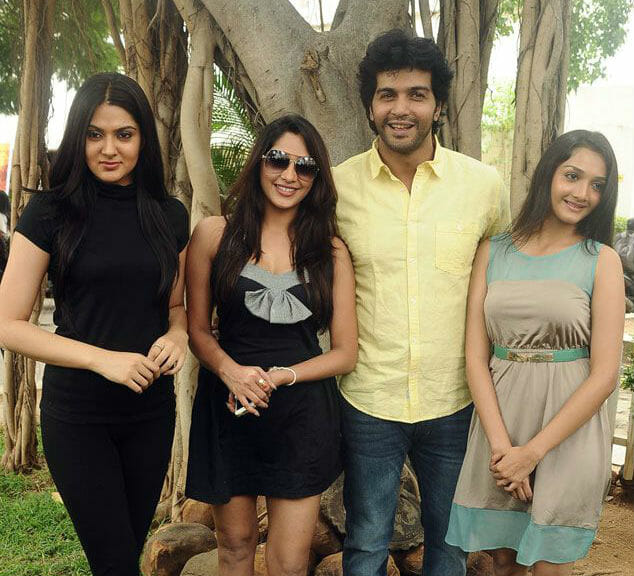 What makes this storyline interesting is that the boy has an identical twin. Now that is bound to cause some trouble, and it does. This whole storyline successfully provides all the laugh and the entertainment that the film promises. There are some ‘laugh out loud’ sequences in the film and rarely any audience member can keep their grin off their face throughout the whole film. This forms the main crux of the film’s story.

Vinay Rai as the identical twins draws the most amounts of laughs.  He keeps up the mood of the film, entertaining through the scenes and drawing a massive amount of cheers and jeers in the process. He accomplishes to keep the film held together and the director, Saran should be grateful to him. Saran on the other hand, fails both in the directing and the story of the film. He penned down an incredibly predictable movie. His direction is more or less average, but he did give some cheeky lines that were quite funny. It was interesting to see a film, especially a comedy film, based on the identical twin concept that became so popular years ago.

Samuthrika, Swasthika and Kesha Khambhati also impressed with their performance. A comic turn for their part was not that expected, but they did manage to draw in a wide amount of applause form the audience. Bharadwaj’s music was foot tapping, however, nothing stood out. The supporting cast also held the film together, especially when the screenplay, threatened to fall out.

This identical twin concept is a well-tested narrative that has made way into their own strata in comedy films. We will see another such in David Dhawan’s Judwaa 2, releasing later this year. So, to say the least there is nothing great to expect from the film. It is solely created to entertain and entertain it does. The predictability factor does shuns the screenplay, but who cares? Have some laughs and forget about it the moment you come out of the cinema hall. It is that simple.