After facing two box office failures in the likes of Sandakozhi 2 and Ayogya, actor Vishal is back on screens with high hopes on his spy thriller entertainer Action. Even film maker Sundar C who had a bad last outing with his directorial Vantha Rajavathaan Varuven has high expectations on the venture. We will have to linger a couple of days to assess whether their anticipation bear positive results.

Undeniably, to cook a gratifying action spy thriller, glamour, style and action are the main ingredients. But pinning all hopes entirely on these elements has turned out to be a costly blunder in the case of Action. Even these elements are enjoyable only to an extent as they seem coerced and redundant on many occasions. Also, the lack of proper logical writing is a big setback for the entertainer. 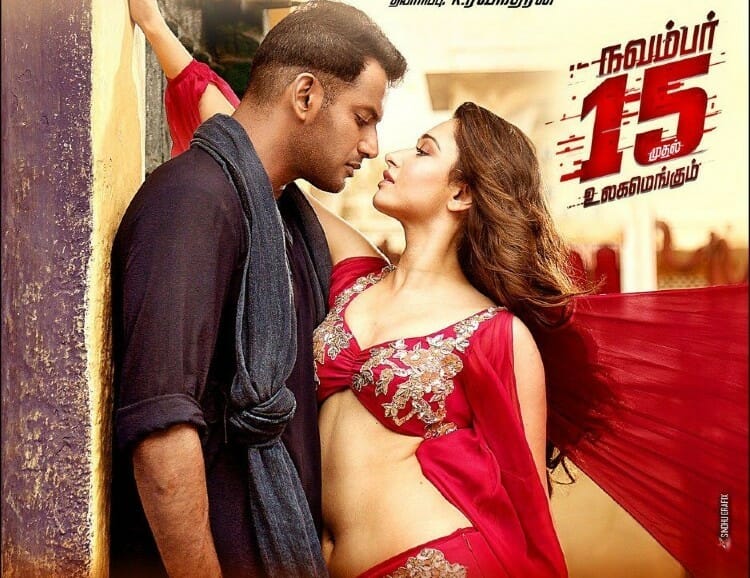 The film opens with the customary hero glorifying dialogues giving the lead character the larger than life image. It is followed by embellished action sequences set at beautiful scenic location in Istanbul which actually garners our attention than the stunt sequences. The story entirely revolves around Subhash (Vishal), an army official. But his family background is too much to stomach given his designation. His father (Pala Karuppaiah) is the incumbent Chief Minister of Tamil Nadu and his brother (Ramki) holds the deputy position. Wondering, have you ever read or heard of a Chief Minister’s son serving in the army? Well, we are just getting started, there are many such extravagant details throughout the flick.

Subhash is engaged to Meera (Aishwarya Lekshmi) whom he holds dear to heart. Wait for few more lines to pass to know what Tamannaah Bhatia is doing in the film, suspense. A terror attack takes place during an election rally held in Chennai which results in the death of the Prime Ministerial aspirant. Subhash losses his brother and fiancé in the terror attack. Now he must track down the mastermind behind this attack and make him pay to undo the strain that has been laid on his family because of the terror attack. So with the assistance of his army associate Diya (Tamannaah Bhatia) he goes after the perilous terror network. Did they succeed in tracking down the gargantuan network, if so how did they do it, is what makes the rest of the film.

Director Sundar C seems to have taken the formula of action spy thrillers too seriously. His focus explicitly revolves just around glamour, style and action but still somehow he has failed to deliver on them too. Generally the films that are billed under this genre toss the logics in air but making a hero wear winter costumes on tropical conditions for style, seriously? And Tamannaah Bhatia travels with layer perfect makeup throughout the movie even after being chased, hit and even after action sequences. At least that could have been pointed out by someone, assistance directors?

Actor Vishal seems to be in love with the mass action hero image that he has landed in and is reluctant to do something out of his zone. This might have been a successful trend a decade ago but in recent times the taste of the cinema audience has clearly changed. So the sooner he releases it, the better it is for the star and his career. In recent times mass heroes of Tamil cinema does not feel the need for powerful villains and Kabir Duhan Singh in Action is not exception either.

Actress Aishwarya Lekshmi has chosen a scope less character on her debut in Tamil. Apart from the glamorous part actress Tamannaah Bhatia keeps running around just to be saved by Vishal. Comedian Yogi Babu who was on board to provide comical relief has failed to sever his purpose except for his occasional one-liners which stands out.

On the technical front, probably the only positive element of the flick is cinematographer Dudley’s frames that have managed to capture the beauty of the picturesque locations that the film journeys in an extraordinary way. But again the poor work in the editing department has badly reflected in the hard work of Dudley. Though music director Hiphop Tamizha has totally botched in the songs section, he makes up for it with his thumping background score. Certain action sequences in the film were choreographed outstandingly while majority remained to be normal.

Director Sundar C has involved in a lazy and loose writing which makes the audience feel like the movie were shot without an actual script. Sundar C’s biggest plus is the comedy track in his screenplay but Action is deficient of that too. Maybe because he chose to drop all his balls on glamour and action he has missed out on what comes best to him. With Action, Sundar C has taken the extravagant hero glorifying level of Tamil cinema to a step further.

On the whole, Action which is hyped to be high on action is in fact high on glamour, less on action and much less on storyline.