There was a time in Tamil cinema when a stream of Amman films kept hitting the screens and family audience flocked at the theaters. Over time, the trend fizzled out leaving Amman fans in drought of witnessing the splendid sight of Amman stepping down from heavens to save her favorite devotee. That was why RJ Balaji had the undivided attention of Tamil cinema audience when he publicized that the title of his next movie would be Mookuthi Amman. It got people wondering whether actress Nayanthara, just like the old times, would walk down the path of destroying a nerve racking sinister bald villain with her divine powers. The additional info that it would be a satire drama made it the talk of the town as it is a hardly ever deployed genre in Tamil cinema. The combination of both upped the expectations on the entertainer. But has the film stood up to its expectations? To know let’s get in to the review. 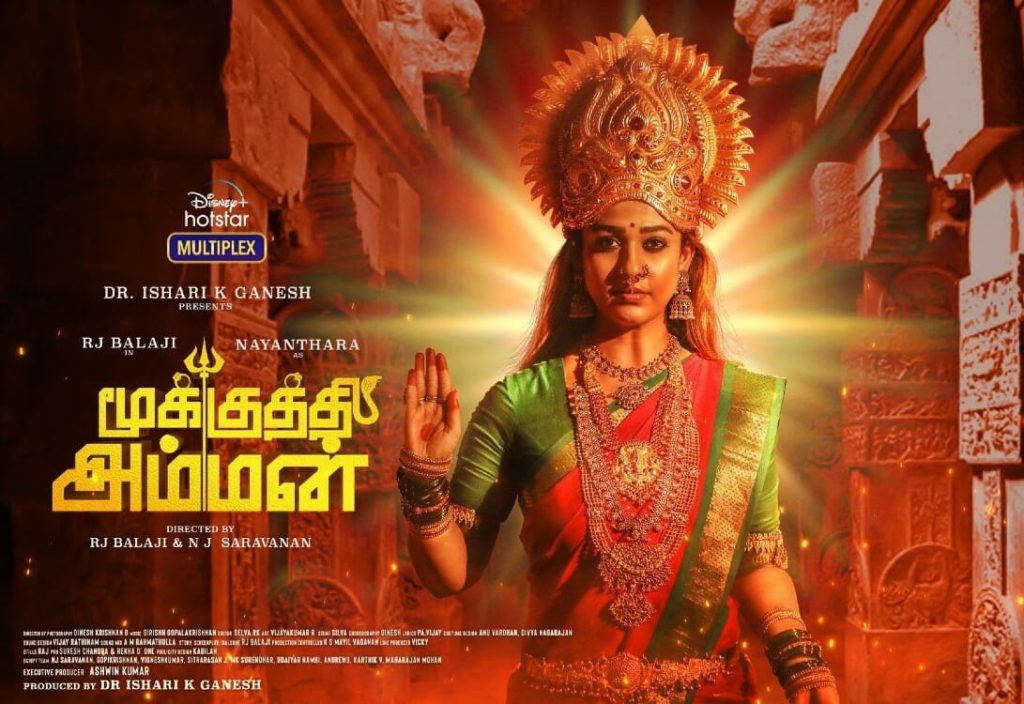 RJ Balaji as Engels Ramasamy (the name has no relevance of any sort to the plot), is an investigative journalist who lives with his mother (Urvashi), grandfather, and his three sisters. His father had deserted the family and inevitably the responsibility to take care of the family falls on Engels. Every member in the family has their own struggles to deal with. Hence, leaving the innocent mother drowned in the sea of sorrows. In order to bring good fortune and to lift the family out of misery she has made it a habit to seek the assistance of godmen. The moment she hears about one, her next task is to pay him a visit. By her belief she easily gets deceived by conmen who are in the disguise of godmen.

Meanwhile, even when fighting hard for his own survival Engels is on a pursuit to bring down a fake godman Bhagavati Baba (Ajay Ghosh). Bhagavati Baba is a powerful guru with a cunning plan to loot hundreds of acres of lands in the locality of Nagercoil to develop a cult region of his own for his followers. Adversity in both his personal and professional life pushes Engels to question his beliefs. That is when he receives a visit from his family deity Mookuthi Amman (Nayanthara). Together they crack fallacy and create awareness among people. As part of their mission they move against Bhagavati Baba from setting up his ashram. How they succeed in their attempt is what makes the rest of the flick.

Mookuthi Amman sheds all the done to death clichés of Amman films of Tamil cinema. Instead of being devotional Mookuthi Amman attempts to pose significant questions about blind faith and takes on religious fallacy. Despite taking up on a serious contemporary issue director RJ Balaji does not make it blunt and preachy. He smartly uses comedy, fantasy, right emotional quotient and gives it a spin to delivery what he wanted. He uses popular sham schemes prevalent in the society as part of religious and cultural aspects to his advantage and sets up the stage to whack them with his sharp wit. Also, his construct of a middle class family is quite relatable and real making it easy for the audience to connect with the characters.

On the down side, the flick depends heavily on its comical quotient and after a point director RJ Balaji struggles to figure out which way to navigate the film. The confusion is so as the drama does not actually have a plot on which it rides and is rather made of a series of short satires on superstitious practices. PK and Oh My God were films that were made on the same premise. But unlike Mookuthi Amman they had a real plot and that helped to keep the audience hooked till the very end. Even the characterization of Mookuthi Amman is weak as it just happens to be a decked up fancy Amman spouting punches and message on beliefs.

The biggest strength of Mookuthi Amman is its ensemble cast. One could not get enough of actress Urvashi’s fine performance. With her exceptional expressions and timing she even turns a dull written comical scene laughable. She switches smoothly from her comical act to emotional zone. Surprisingly actress Nayanthara has nothing much to perform than appear in modish silk sarees. She was supposed to be the lead in the flick but it is actress Urvashi who steals the show. Actor RJ Balaji starts brightly but as the film proceeds he gets clue less and goes in to repetitive mode to the point where he gets intolerable. For someone who wrote his own character, he has none to blame but himself. Actor Moulee makes his presence felt in the short screen time written for him.

On the technical front, the major piece of an Amman film is the background score of Amman. Musician Girishh G does not have much to do to get that right. Cinematographer Dinesh Krishnan’s frames and editor R. K. Selva’s cuts have been adequate.

On the whole, a well intended satire drama that packs a decent level of entertainment but not if you look for a solid story.