In times when there is a genuine scarcity for brain teasing investigative thrillers in Kollywood debutant film maker Sri Senthil has garnered the attention of the lovers of the investigative thriller genre with a decent attempt. Actor Bharath who has been finding it hard to place himself in quality entertainers have finally managed to do so after a very long time. Very rarely in Tamil cinema certain films demand you to overlook the budget constraints that is very obvious in the way the film is presented and make you feel for it. Kaalidas is one such film. Kaalidas takes its audience on an unvarying journey of surprising them with the unanticipated treatment of even certain stereotypical scenes of cop thrillers. 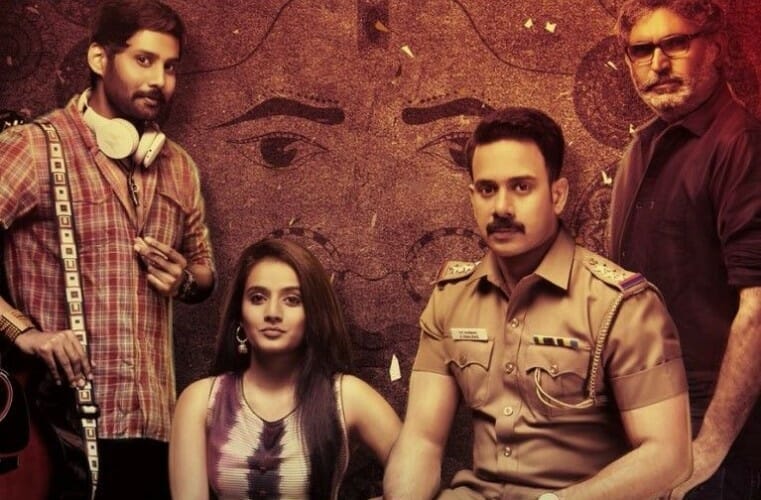 Kaalidas opens with a woman falling off to ground from a terrace of a multi storey building. She dies on spot. Kaalidas (Bharath) a good intentioned cop arrive at the spot along with a couple of officers to examine the body. He examines the spot and body thoroughly and hits up on few scratch marks on the hand of the dead woman. But that does not intrigue him. So he rules out foul play and concludes it as a suicide. But things get knotty when couple of deaths happens in the similar manner. Now Kaalidas finds a pattern in these deaths but struggles to build a case. Meanwhile, he also has to save his sinking relationship with his wife Vidya (Ann Seethal) who feels that he does not spend time with her of late. When a new tenant (Aadhav Kannadhasan) moves in to their neighborhood and in to their life things sinks further.

Vidya befriends him and gradually begins to enjoy his companionship which puts additional pressure on Kaalidas who is already too engaged with the case. Kaalidas somehow manages to work with his full attention towards the case but finds it hard to crack it. Things get interesting when his superior officer (Suresh Chandra Menon) with whom he finds a little solace comes on board to assist him with the case. Is the deaths just suicide or is a serial killer on the run, will Kaalidas crack the case and also save his marriage at the same time, is what makes the rest of the movie.

Director Sri Senthil has not hesitated, not even for a second in the script, to go against the commonly held stereotypes of cop films in Tamil cinema. Generally, cop thriller is the genre which kollywood story tellers and heroes, even who have just begun their career would like to choose to show their mass to their aficionados. Hence, even a cop thriller with little realism and brainy elements become a clear standout film in the industry. But to be fair Kaalidas is little above than that with a clear and study build up which moves the film to the boiling point where it is either make or break moment. It is at this crucial moment the film dilutes and shatters our high hopes. But until then it is a neatly and smartly written master piece from a man who seems to know what he is doing.

Actor Bharath has delivered a solid performance as usual and looks apt in the slightly unstable cop’s role. With a physique like him you cannot ask for a better cop. His choice to do a cop film which is low on tone and high on script has paid him well and will easily get in to the best films of his career. Actress Ann Sheetal for a debut actress has delivered a neat performance and is very fitting in the independent women character. Actor Suresh Chandra Menon is excellent in the character of an established cop. Be it his voice or his majestic walk, he scores totally. And it is the best role that he has chosen to depict since his comeback to acting. The rest of the cast has delivered what is adequate to the film.

On the technical front, there is nothing special to the technical side as the unit seems to have worked with a very tight budget. Despite that musician Vishal Chandrasekhar’s background score adds to the thrills and cinematographer Suresh Bala’s frames and angles add strength to the flick.

Director Sri Senthil has packed many things in the film and even has explored the extramarital affair of a woman to an extent which not many film makers would dare to. Yet he keeps it unbiased and deals with reason. He makes his intentions very clear with the trend challenging intro scene of his lead hero. Kaalidas’s core stands on its fine writing and the way its characters are developed. A little work on the climax, perhaps a clear decision about the climax could have elevated the film to a whole different level. Not to forget a little extra spending as well.

On the whole, Kaalidas is a finely written investigative cop thriller which could have been a lot better with a good ending and a little extra budget.