Murungakkai Chips has one of the most absurd plotlines in recent times. Generally, when it comes to adult comedies in Tamil cinema there is a widely held notion that logic, reason, screenplay, story everything can go for a toss. Well, this approach works only when the compromise we make results in entertainment.

Off late, increasingly adult comedies are finding their way in to Tamil cinema. Though none of the recent adult dramas have bagged a considerable commercial success, the growing interest for them among the audience is apparent. Hence, the film makers and actors gravitate towards adult comedies to capitalize on the trend. The latest to join the swing in actor Shanthanu Bhagyaraj. The actor who was last seen in Kasada Thapara is back on screens with his adult comedy Murungakkai Chips. The actor has not had a solid hit in a long time and really is in need of one to get his career on track. The drama is helmed by debutant film maker Srijar. So, how has actor Shanthanu Bhagyaraj’s Murungakkai Chips come out? Has his attempt on adult comedy worked out? Will it give the actor the much necessary break that he is craving for? To know that let us get in to the movie review. 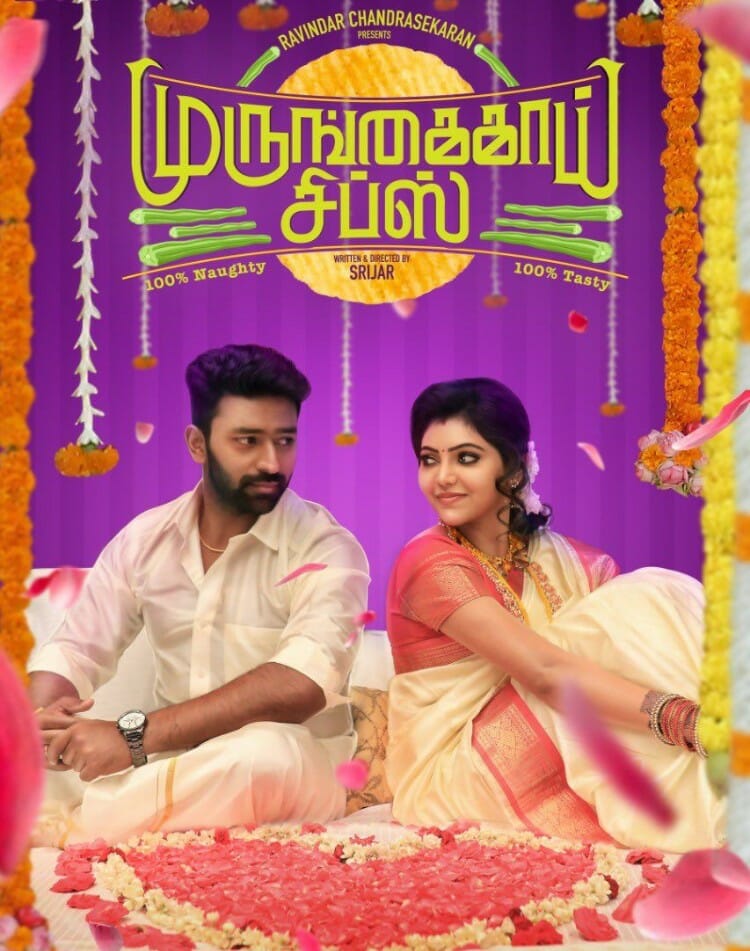 Murungakkai Chips is centered around a newlywed couple Arjun (Shanthanu Bhagyaraj) and Shanthi (Athulya Ravi) who are preparing for their first night. The film opens with adult actress Shakeela’s voice over stating that Arjun would lose his inheritance if he consummates his marriage on his first night. Later we are presented with the reason for it. Arjun’s grandfather (Bhagyaraj, why would you even consider a man’s real life father to play his onscreen grandfather? To make the hero look even younger?) pulls him just before his first night and tells him that their family tradition is to not have coitus in the first night. He asks him to follow it, and failing which he warns him that the 300 crore inheritance that he is supposed to receive will be written off to orphanage. Seriously, man? Not sure how many orphanages in Tamil Nadu have received such donations. Arjun’s grandfather has his reason for setting such a condition. His logic is, if a man can suppress his gratification on his first night, then he can almost exercise his self-control over anything in the world.

On the other hand, we have Shanthi’s aunt (Urvashi) telling Shanthi of an enduring issue in their family line. She advices Shanthi to consummate their marriage on the first night and in no case, she should fail to do so. She says Shanthi that the women in their family who have not had coitus on their first night never had a chance to give birth. Alarmed of this new piece of information, Shanthi enters the bedroom with a resolve to do it at any cost. Meanwhile, we have the family manager (Manobala) and his wife (jangiri Madhumitha) working against Arjun to make him lose his challenge. So that they can have a lumpsum commission from the boss of that orphanage that would receive the 300 crore in Arjun’s failure. Which one of Arjun and Shanthi is going to win the bedroom battle is what makes the rest of the flick.

Murungakkai Chips has one of the most absurd plotlines in recent times. Generally, when it comes to adult comedies in Tamil cinema there is a widely held notion that logic, reason, screenplay, story everything can go for a toss. Well, this approach works only when the compromise we make results in entertainment. Does Murungakkai Chips feed us with laughs for our compromises? Absolutely not. Debutant director Srijar struggles to move the flick around the very plotline he chose to build the entertainer. He just fills the space with cringy scenes and tries to sell them as adult comedy. Staging a situation is the key not just for adult comedy but for comedy in general. We do not get to see any such creative scene building in Murungakkai Chips. All we have is the lead characters being clueless about what they are doing and few other characters running around without a real purpose just to drag the running time.

Director Srijar seems to have banked a lot on the adult side of the flick. It appears that he has gotten in to the mindset that those that come to watch an adult comedy expects nothing other than the adult material and could easily be deluded. There is a blatant laziness in everything. He cannot even get a proper wig for his artist let alone the other aspects of the flick. Story teller Srijar did have a great advantage in Murungakkai Chips in having director Bhagyaraj on board, the man who has a reputation for adult comedies. But for some reasons the man himself is underused in a poorly written role. Same is the case with actress Urvashi who just disappears after few appearances.

Actor Shanthanu Bhagyaraj is adequate but on few portions his performance seems to be exaggerated. Actress Athulya Ravi moves from being the innocent next-door girl to the glam lady of Tamil cinema. She has delivered a decent or perhaps should we say a hot performance. Veteran actor Bhagyaraj looks helpless with his not so properly fixed wig. Despite so many talented comedians in the likes of Yogi Babu, Urvashi, Manobala, Jangiri Madhumitha, Munishkanth, Mayilsamy, and Lollu Sabha Manohar, the film does not offer much laughs. The rest of the cast has delivered what was asked of them.

On the whole, filled with jaded comedies actor Shanthanu Bhagyaraj’s adult comedy Murungakkai Chips turns out to be a tedious affair of December.