‘How a society views a woman and in case of unconventional events how it affects everyone involved’ is the common theme on which the short-ies are developed. Paava Kadhaigal unfolds with unique plot lines; a pregnant daughter who has to survive the caste chauvinistic side of her father, a Trans woman struggling for acceptance, twin sisters who challenges their hypocritical father, and parents whose resolve are put to test as they deal with their daughter who is a victim of abuse.

The growing popularity of the digital medium has opened up a promising door for Tamil cinema, where predominantly the lead character takes the center stage. It was hard to make anything different happen on the plot wise other than attempting to give larger than life picture to its lead character, let alone exploring what is considered as taboo in the society. Directors of Paava Kadhaigal efficiently utilize this space to explore things that are not usually chosen by film makers of Tamil cinema. 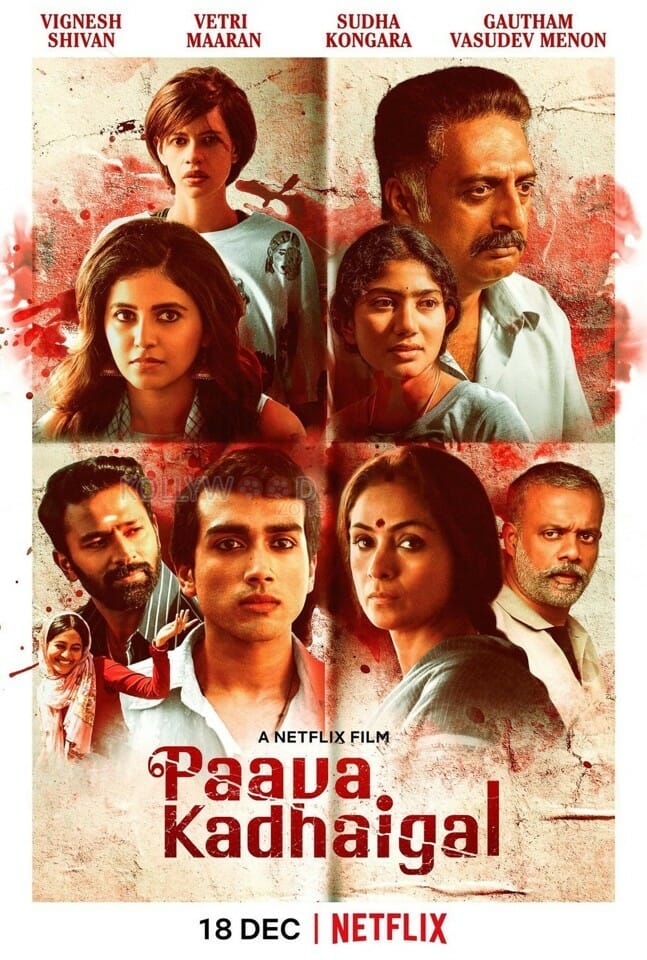 ‘How a society views a woman and in case of unconventional events how it affects everyone involved’ is the common theme on which the short-ies are developed. Paava Kadhaigal unfolds with unique plot lines; a pregnant daughter who has to survive the caste chauvinistic side of her father, a Trans woman struggling for acceptance, twin sisters who challenges their hypocritical father, and parents whose resolve are put to test as they deal with their daughter who is a victim of abuse.

Oor Iravu, helmed by director Vetrimaaran talks about how deep caste is entwined in the lives of people in south Tamil Nadu and how it coerces parents in to killing their own kids in the name of honor killing when they choose someone from what is considered as a lower community, as their life partner. Janakiraman (Prakash Raj) is a hardcore patriarchal father who could not come to term with his educated daughter Sumathi (Sai Pallavi) choosing her life partner on her own. Years later, hearing that his daughter is pregnant, Janakiraman pays a visit to her flat. We get a warn father and daughter reunion moments. He then convinces her to come home to have a proper baby shower function. On the night of baby shower awaits a gruesome revelation.

Prakash Raj who is known for his many talented roles adds one more exceptional antagonist role to his tally. But unlike his other roles ‘Janakiraman’ is sure to leave a lasting effect among the audience. With his experience he smoothly essays a character that often switches from love to callousness. Actress Sai Pallavi excels with her performance as a loving and helpless daughter.

Thangam, directed by Sudha Kongara is about a trans woman for whom even simple things have to be won over only after a hard fought battle. Sathar (Kalidas Jayaram) is a young trans woman who longs for a normal life just as others. Despite being the object of derision of the villagers she flaunts her beauty. She has her own little world around her – a world where her best friend Saravanan (Shanthnu Bhagyaraj) holds a very special place. But can she hold herself together when he breaks her heart is what rest of Thangam is about.

Actor Kalidas Jayaram takes up a very challenging character at the initial stage of his career and has given his best. His dialogue delivery, body language, and gesticulations speak of the efforts the actor has put in, to get under the skin of the character. Actor Shanthnu Bhagyaraj has also played his part well.

Love Panna Uttranum, filmed by Vignesh Shivan deals with unconventional choice of a woman along with caste chauvinism. Veerasimman (Padam Kumar) is an arrogant boastful man who takes pride in his caste. He could not stand his twin daughters Jothilakshmi and Adhilakshmi (Anjali) taking people that do not belong to their caste as their life partners. But unlike other stories, here, the caste-ist father is offered a second chance to become a good man despite slaughtering one of his daughters. What about caste-ist fathers with one daughter? The story teller surely must have done better to cover that angle. Despite dealing with a serious issue Vignesh Shivan does not shy away from giving the flick his uncanny humorous touch. Look out for the scene where Penelope (Kalki Koechlin) informs to Veerasimman about her love for Jothilakshmi.

Actress Anjali shines in the portrayal of twin sisters by depicting the variations with ease. She cakewalks the role of a bisexual woman neatly. Kalki Koechlin does not have much to perform but still makes her presence felt as a French woman.

Vaan Magal, directed by Gautham Vasudev Menon is the most gut wrenching one of all short films as it deals with a minor who is abused. Ponnuthaayi, a 12 year old kid’s ambition to become an astronaut is distorted when she is abused. The family has to process their pain, grief, rage, while being a ray of hope for their child. Sathya (Gautham Vasudev Menon), the father of the child is saturated with guilt and his helplessness would not let him face his kid. Madhi (Simran), the mother stifle her throbbing pain to stand as a moral support to her child. Despite addressing a strong issue, the film does not connect effectively with the audience as it should have. Perhaps, the time constraint is a liability.

Gautham Vasudev Menon is known for his modish characterization and filmmaking. But in Vaan Magal he dons the traditional attire. He manages to survive in the normal portions but struggles in the emotional moments. Actress Simran scores as a dotting and angry mother – seems like the actress is ready for round two in the K town.