On the whole, Dikkiloona is just another reminder that conveys Santhanam needs to ditch his notion in silly plots and start picking scripts of substance, if he wants to build a career as a lead hero.

Actor Santhanam, pushing aside his buddy Simbu, is climbing to the pinnacle of being the most controversial figure of Tamil cinema. In the past few years not even one film of the star comedian has hit the screens without falling in to controversy. Dikkiloona is the latest addition to the controversy list. This time around his film has run in to controversy for having insolent remarks on differently abled people. Even with so much publicity owing to controversies, his films fail to do well in the box office. The comedian is dearth of success, for years now. Is his latest science fiction film (yes, you did read that right) Dikkiloona solid enough to bring the actor to the winning zone? To know that let us get in to the movie review. 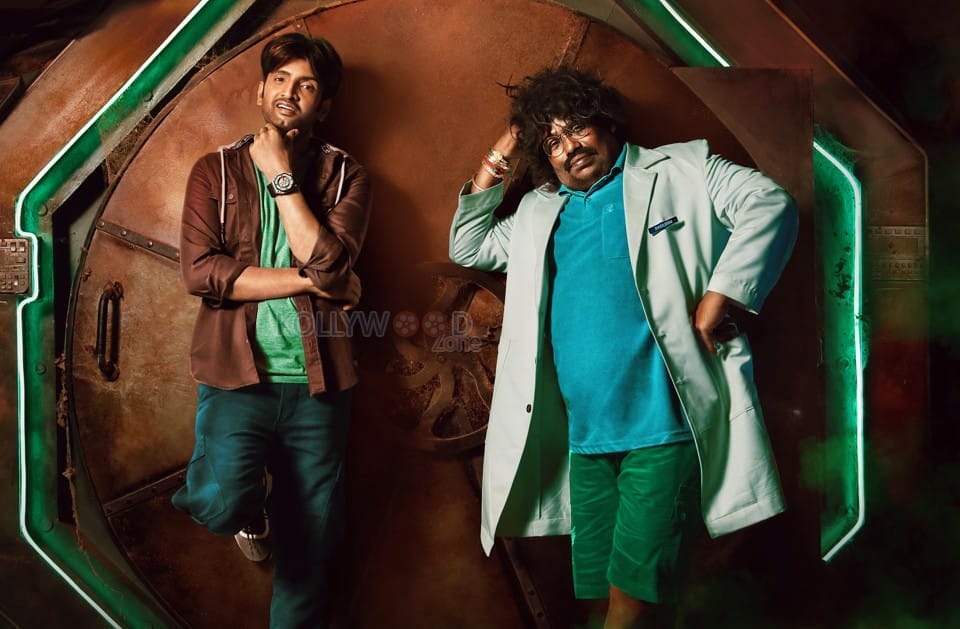 The film follows the life of Mani (Santhanam), a happy go lucky young man. He and his longtime girlfriend Priya (Anagha) tie the knot. After seven years, in 2027, just like most marriages their marriage dangle on a cliff. Mani seeks for redemption. That is when he comes across a derelict car chassis. He notices a pathway beneath it. Following it he reaches a science lab, where a team of scientists are working on a time machine. They could not come up with a formula to get the machine to function. Mani who just walked in to the lab coincidently stumbles up on his childhood friend Albert (Yogi Babu), who works as a janitor in the lab. By mistake, Mani sets in motion a chain of events that gets Albert electrocuted. Passed out Albert wakes up as Albert Einstein. His intelligence has enhanced to the level where he can dictate the formula to restore the time machine. An idea pops in Mani. To use the machine to escape his marriage that has turned bad.

He travels back in time to 2020 before he got married to Priya and cancels their wedding. This time he marries Priya’s friend Meghna (Shirin Kanchwala). Fast forward to 2027, Mani is not happy even with this marriage. Both Mani and Meghna decide to get divorced. He then meets Priya and learns that she was pregnant by the time he canceled their marriage. Now he wants to rectify his blunder and once again takes the trip to 2020. How Mani fixes his fault and how that changes his perspective about marriage is what makes the rest of the flick.

The issue with comedy films that are built on the principal ‘entertainment at any cost,’ is that they have got no consideration for logic and reason. Whatever the story teller feel is funny, is added to the plot. Dikkiloona suffers from the same bad cooking. In films like these it is the audience who are culpable, if they go looking for logic and reason. When you have forgiven the absence of logic and reason, the film must live up to its purpose – offer us entertainment. The problem with Dikkiloona is, it does not. The script is fresh and looks interesting on paper. But what has transpired to the visual medium is two hours of catastrophe.

Dikkiloona does not just want to be a comedy film, it is not enough. It wants to send a social message to its audience. In fact, these social messages are funnier than what it attempts to sell as comedies. The emotional scenes feel artificial and does not evoke a reaction in us. The counters that actor Santhanam delivers in the pretext of comedy is difficult to sit through. It is hard not to wonder whether have we lost our sense of humor or is this kind of stuff is what qualifies as comedy these days. If yes, the state of comedy is tragedy.

Actor Santhanam does what he usually does in his films. Depend on insult comedies, name calling, body shaming, no modulation changes or nothing. He simply comes around delivering counters, some of which are enjoyable, and many cringy. It is high time the actor realizes that the same pattern of doing things film after film is not going to lead him to success that he is after. Yet another film, yet the same stereotypical way of writing female characters. Actress Anagha’s character has nothing to test her acting prowess. Actress Shirin Kanchwala seem to have been brought on board just for the skin show and double entendre scenes. Comedian Yogi Babu entertains inconsistently. Veteran actor Anandaraj continues to ride on his form. The team of comedians Rajendran, Lollu Sabha Maran, Chitra Lakshman, and Munishkanth fight hard to keep an otherwise tedious flick afloat.

On the technical front, music director Yuvan Shankar Raja is yet to get back to his best rhythm. His songs and background scores are middling. Cinematographer Arvi has covered the flick in best ways possible. His frames help in fortifying Santhanam as lead hero. Editor Jomin’s cuts have enhanced the work of his colleague.

On the whole, Dikkiloona is just another reminder that conveys Santhanam needs to ditch his notion in silly plots and start picking scripts of substance, if he wants to build a career as a lead hero.

Dikkiloona is available for streaming in ZEE5 OTT platform.