Yet again, after crossing several financial hurdle poles actor Santhanam has had a new release in the likes of Biskoth. Until a few years ago, Santhanam was the most sought after star comedian in Tamil film industry. Playing a significant role in almost every leading actor’s flicks, that was a busy phase for actor Santhanam. But things went from north to south when he made up his mind to star only as lead hero. The frequency at which his films hit the screens decelerated. Even the ones that managed to have a release did not enjoy great reception as he would have expected. Hence this time he has put his balls on his tried and tested success basket – Lollu Sabha spoof show. He does so by giving Adam Sandler’s Bedtime Stories a Tamil version spin. But has he spun it in the right way? Is the entertainer funny enough to hand the actor a solid commercial success that he craves for? To know let’s get in to the review of Biskoth. 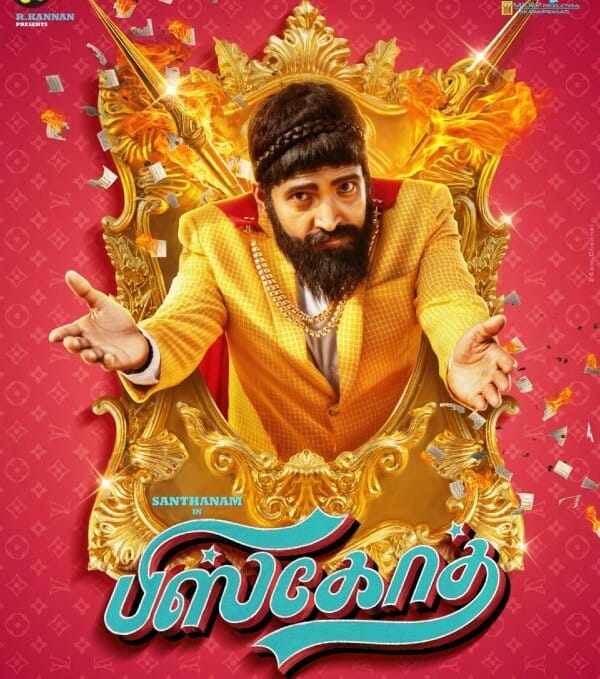 Dharmarajan (Aadukalam Naren) is a trader who runs a biscuit company. Like all businessmen he dreams to expand his business and make his son Raja (Santhanam) the head of the corporation. In unfortunate turn of events he passes away and his close ally Narasimhan (Anandaraj) gets to take over the business. Fate has its play and puts Raja back in the company as a worker, where he is made to run for his money by another worker Ganesh. Meanwhile, Raja has a habit of regularly visiting an old age home located nearby the company. He spends time with the elders there and is popular among the folks in the home.

One day a mysterious old woman becomes a new member of the house and in no time Raja gets close to her as well. They begin to get along well. Every time Raja pays a visit to the house she keeps narrating short stories to him. Time goes by and Raja works his way up the ladder and grows close to getting promoted as GM. Slowly Raja realizes that every story told by the old lady unfold in his life and become real life events. His enthusiasm rises vigorously propelling him to listen to her stories with a lot of expectations. Who is this old woman and will Raja manage to get his company back, is what makes the rest of the flick.

Actor Santhanam has a knack of even turning dreary lines to an enjoyable one with his sharp timing. But that alone is not sufficient to keep the audience invested in a full length entertainer, particularly when that becomes tedious after a point. It is not fair to expect a plot of any sort in a spoof movie. But when the solo purpose of making a spoof entertainer fails, a decent comical plot line might have made it at least a middling film. Biskoth lacks both the elements. The only strength of the flick is the compilation of short spoof clips. But even there the free style effortless writing of the film maker fails to make the most out of the spoof, turning Biskoth in to a package of mind numbing one liners. It is high time that Santhanam and his trusted allies recognize the importance of having a proper comedy writer who puts some real efforts in penning down the one liners.

Biskoth also has one of the repeatedly pointed out moral negligence issue that all of his films in the recent past has gone through, the casual irreverence on treating women issues. For that reason, why do even Santhanam’s flicks need a female lead for? So he can pass a cringe or body shaming jokes on the go? Fantasy is a favorite genre of millions across the globe. But only our gifted story tellers could ruin that for us with their preposterous sense of fantasy elements. Sometimes one could not help but wonder, what do Tamil film makers make of the term ‘fantasy’. Guess it is one of those questions for which life does not offer answers to.

Santhanam and his regular team of comedians struggle to do what they usually do best. Expecting the actors to shine in a wafer thin plot is not fair either. Despite inconsistency Santhanam manages to entertain. Veteran actress Sowcar Janaki shines with her performance indicating that she has not forgotten her trade yet. Once an atrocious villain but now a jovial people’s favorite villain Anandaraj has nothing to bring to the table. It is disappointing to see how weakly his character is written. Motta Rajendran and Aadukalam Naren have delivered what was required of them.

On the technical front, musician Radhan’s scores are adequate for Biskoth movie. Cinematographer Shanmuga Sundaram is another thorn in the bush. His frames have only further burdened the already sinking ship. In a film like Biskoth even a couple of wrong cuts by editor R. K. Selva would be hard to figure out.

On the whole, In Biskoth, Santhanam battles hard to shoulder a film that hardly has anything to offer but a collection of spoof clips.