Sri Thenandal Films has made the production for Dhilluku Dhuddu, which is a Tamil slapstick comedy horror movie which was directed by Rambala. The film features Santhanam and new face actress Shanaya in the supreme roles, while Saurabh Shukla appears in a pivotal role. The film’s music was composed by S. Thaman and the background score was made by Karthick Raja. Deepak Kumar Pathy has made the superb cinematography work and the editing work was performed by Gopi Krishna. 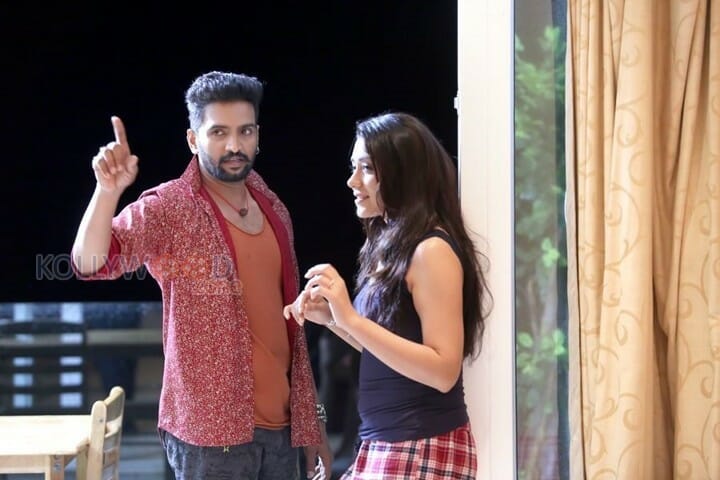 Actors like Anandharaj, Singamuthu, T. M. Karthick, Lollu Sabha Manohar have acted in empowering roles in this horror comedy movie. It is said that the satellite rights of the film is acquired by Sun TV. Dhilluku Dhuddu had promised to offer something new as the film was said to be a spoof on horror flicks.

The film starts with a flashback which introduces us to the typical ‘ghost’ bungalow which is situated on a hill station. After narrating what happened in that bungalow many years ago, Dhilluku Dhuddu snaps back to the present. As the story moves Santhanam falls in love with Shanaya, but her father which was played by Saurabh Shukla, is not happy about their relationship and plans to kill Santhanam with the help of ‘Mottai’ Rajendran.

Santhanam dominates the major part in the movie with his sarcastic speech and has made the audience smile out of tension. The new face actress Shananya shows that she is from other state by her lip movement and her acting was not satisfactory. Rajendran, Karunas, Saurabh Shukla and Anandaraj have done justice to their part. First half is to test your patience and the second part if full of laughter. It is just a passable fare for Santhanam’s usual gimmicks