This is the second time actor and producer Vijay Sethupathi has co written a script with his close buddy Biju Viswanath after his first production venture Orange Mittai. The oddity in the title Chennai Palani Mars itself gives us a clue of what the flick will have for us in the 2 hours journey that it is about to take us on. The writers of the film have tried to explore or speak about the mental health issues that are quite prevalent in the youths of the modern world. 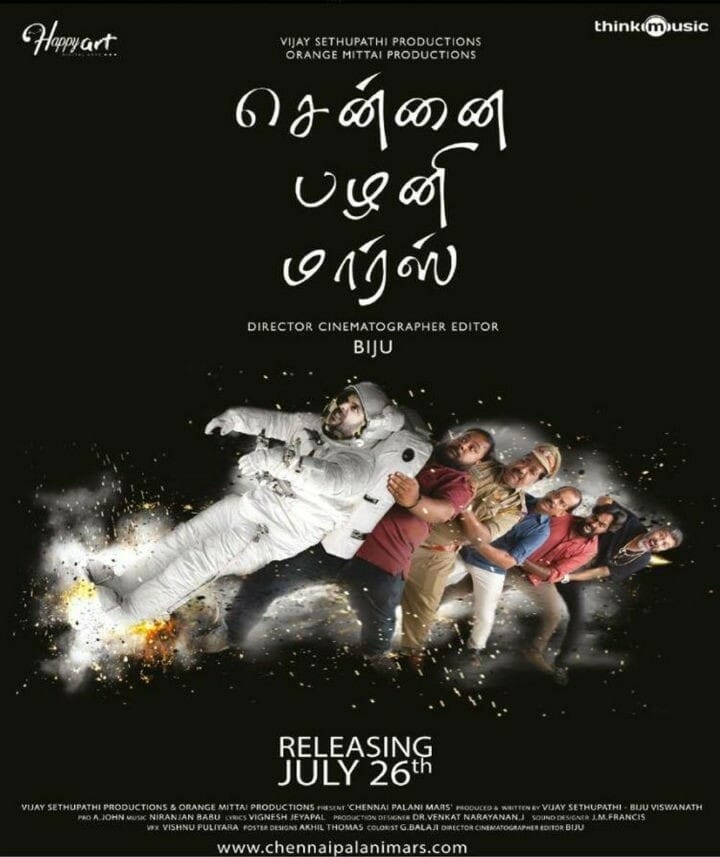 The film opens with a father and his son Akash (Praveen Raja) trying to go to Mars. But the problem lies with the mode of their transportation – as the duo attempt to travel to Mars with their speed of thoughts. Yes, you heard that right. The theory that Akash’s dad proposes is a zero cost strategy to travel to Mars. Akash’s dad has been working on this mission for the past 20 long years. His perseverance and labor really needs acclamations. Akash follows the foot prints of his father and he takes up this mission on his shoulders. If this makes you utter really? Than what will you do with the piece of information that the writers mildly throw at you, that Akash is an astrophysicist. Hold your breath because the flick has got more of the foolhardy scenes that are hard to stomach.

Akash is then taken to a de addiction center for substance abuse where he befriends Andava Perumal (Rajesh Giriprasad) an eccentric signer and now they team up to go to Mars. While on their mission to Mars the duo has deals with brain dead cops who are attempting to slander their inspector, drug peddlers and gangsters. Every single character that comes in the film has peculiar habits and strange behaviors which prevent us from rooting even for a single character in the whole flick. Will Akash and Andava Perumal accomplish their mission by dealing with all the people on their way, is what makes the rest of the film.

Praveen Raja and Rajesh Giriprasad have given what the script demanded. The rest of the actors in the film have delivered a sub standard performance. A better casting might have at least made the flick tolerable.

The writers seem to have developed the script on the small and key outline that there should not be any boundaries or limitations to ones’ dream and one might face weighty and grave disappoints on their way to their dream but one should not give up at any cost. But the treatment that they choose to deliver the message is where the problem lies. Attempting to speak on the mental health issues and putting that as the flesh on the bone made out of chasing dreams philosophy has not worked well in their favor. The script is indeed fresh and might have looked good on papers but it is a terrible disappointment on screens. Very comfortable writing and filmmaking has cost the film and prevents it from being an engaging affair.

On the whole, Chennai Palani Mars is an ambitious movie that attempts to speak of the dreams of the young generation and also about their mental health issues but muddling up both has made the film look, sound, and behave like a stoner film.