If you have watched the Bollywood movie “Special 26” then you would definitely be able to relate to it. Well, this is definitely not a remake or is it? Well, let’s read to find out how the movie Thaanaa Serndha Koottam had actually appeared to the audience. The core plot of the film is very similar to that of the linked Bollywood film but the screenplay has been modified brilliantly to suit the Kollywood film audience. But practically speaking Thaanaa Serndha Koottam is a film that needs to be appreciated for its originality and performance. Not only is the crisp storyline but also the screenplay is just outstanding. The story appears to be just like some drops of lime soda on a hot summer day. It is that fresh! The storyline caters to all the needs of Tamil commercial cinema and camouflages in the environment that prevails in the state. 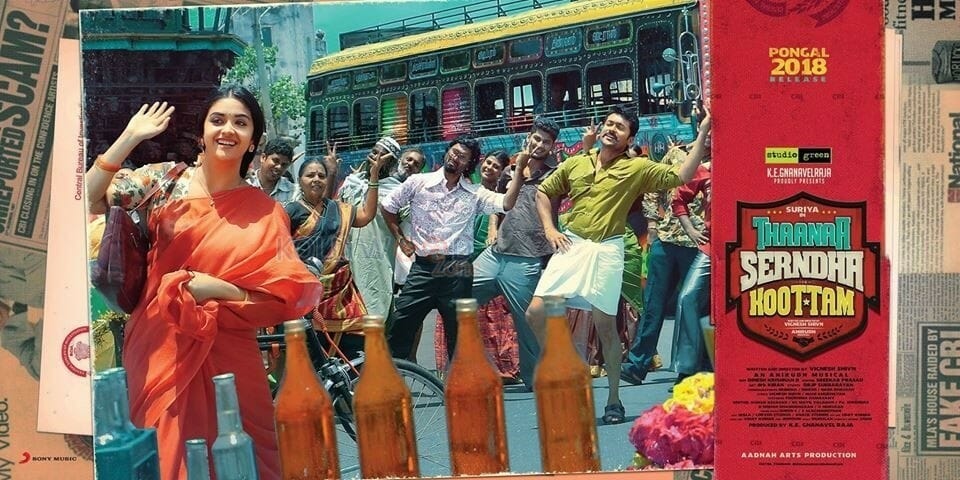 The background of the film is set in the late 80’s, in the pre-liberalisation India when unemployment was a very big issue. While now a dream job means that a juicy pay-cheque will be withdrawn every month. But then, a dream job meant a job with full security. This is the rustic background of the film which is the platform of this movie. Like every film, there is a lead actor which is Suriya but this time the story is not only about him. There is a group of boys who have shown off their talent phenomenally. The bandwagon of stars includes Karthik, Keerthi Suresh, Ramya Krishnan, Senthil, Suresh Menon, RJ Balaji and more. Mainly it is the protagonist Surya who will loot from the rich and this task would not be performed alone but with Thaanaa Serndha Koottam. The unexpected twists and turns of the film are something that will keep us glued to the seats and the no-nonsense attitude of the scriptwriter and the director is what has made the film a big hit. The second half of the film is graver than the first half and the only negative point of the film is that some of the scenes of the second half have been dragged a bit.

There are certain loose ends in the film as well and there are again certain characters that are seen to disappear suddenly without leaving any clue. For a film to have the double effect and instigate double feelings in the hearts of the audience needs some guts to make. The director of Thaanaa Serndha Koottam, Vignesh has done a really good job and has given the right spice that the film needed through its screenplay. The film actually deals with corruption that has been prevalent from that time of the society. It even deals with the delicate issues of black money but still, it entertains the audience in a way any light-hearted film would do. The “not-so-easy-ride” that the audience has appreciated in the film is something to appreciate. So if you want to watch a film of the matter then Thaanaa Serndha Koottam is the right choice for you.