Director Sasi comes back on screens after his much talked about film Pichaikkaran with the family come thriller drama Sivappu Manjal Pachai. While he had gone with mother and son sentiment in Pichaikkaran, this time around he opts for brother and sister sentiment with a little exploration on the Maman – Machan bond as well. Generally very few story tellers in the industry tend to stick to their style of film making even after delivering a couple of flicks and director Sasi is one of them. Just like his previous movies the director has struck to his strengths and has penned a plot with sentiments and emotions with little too high dosage. Well, if you have watched the director’s previous films you will precisely know what to expect out of Sivappu Manjal Pachai. The film might connect well with the family audience but we will have to wait to see how it does among the youths in the state. 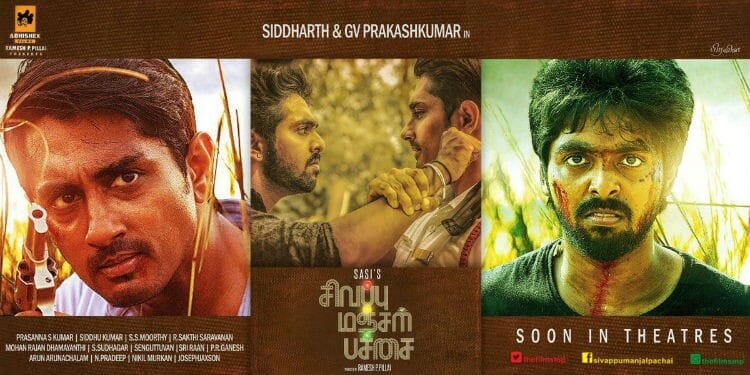 Madhan (G.V. Prakash Kumar) is a reckless street racer but a very responsible brother who lives with his sister Rajalakshmi (Lijomol Jose). They both have been orphaned at a very young age. Since then they have grown up looking out for each other and they share an imperishable bond. Their only relation is their aunt who meets them from time to time. Madhan spends most of his time in street racing and while he is not at racing he picks up petty fights with the local gangs. On one occasion Madhan gets caught while racing by Rajasekar (Siddharth) an honest traffic police officer. Things get out of hand and Rajasekar humiliates Madhan in front of the public by asking him to wear a women’s outfit. This incident earns Rajasekar Madhan’s wrath for a payback. Things get more hideous when the video of Madhan getting humiliated gets viral on YouTube. Madhan could not draw out the humiliation episode out of his mind and longs for revenge.

Meanwhile, Rajalakshmi meets Rajasekar formally through family members and starts to like him. Madhan gets the shock of his life when his sister gets in to a marriage alliance with Rajasekar. How Madhan deals with the situation and the emotional battle between the three is what makes the rest of the family drama.

Director Sasi seems to have crafted the rivalry between Rajasekar and Madhan inspired from Tom and Jerry. The intensity of rage and fury that we get to see in the scene where Rajasekar insults Madhan is not felt in the second half after Rajasekar gets married to Madhan’s sister though the two maintains their rivalry. The North Madras essence and all the racers that come in add to the authenticity of the drama. The film which travels as a family drama suddenly switches gear and gets in to the commercial action entertainer zone. And we get to witness the tried to death template sub plot where a villain comes in so that both the lead characters who are in the enemies zone could unite to fight the main villain which makes the film a tedious watch from there.

Siddharth is quite fitting and very convincing in the role of a strict traffic police officer. His physic complements the character that he has portrayed. Probably this must be G.V. Prakash Kumar’s sixth film where he depicts the role of a typical North Madras guy in which he seems to be well seasoned. The actor shines in his role without any doubt. Actress Lijomol Jose has made a solid debut to her acting career with her role in the flick. The actress is very natural and has performed well even in the emotionally heavy scenes. Kasmira who plays GVP’s pair is charming and cute but does not have much scope in the plot.

On the technical front, though Siddhu Kumar’s music is not up to the top standards, it is not bad either. In fact, the musician has delivered couple of impressive BGM’s particularly in the chase sequences. Cinematographer Prasanna Kumar has captured the tricky long chase sequences quite well and better VFX would have complemented the man’s’ hard labor.

Story teller Sasi is quite known for his pattern of films but the dosage of melodrama has gone a bit too far in Sivappu Manjal Pachai particularly in the intentionally prolonged climax. The director has penned the character of Rajalakshmi quite well with a lot of dignity and has managed to showcase how a woman acts as a bride for putting up and keeping a family together.

On the whole, Sivappu Manjal Pachai being the next dosage of Sasi’s melodrama turns out to be higher than the prescribed amount.