Most of director Pa. Ranjith’s movies deal with caste discrimination and lay light on the plights of oppressed people. For the reason he has earned himself an image of a political instigator. To ditch that image, in Sarpatta Parambarai, he has decided to go out of his preferred zone a little bit, and has made an out and out sport film. Of course, with the backdrop of North Madras. Actor Arya who is in need of a solid successful commercial film has given everything he could for the movie. Will Sarpatta Parambarai help bring actor Arya back to the winning zone? To know that let us get in to the movie review. 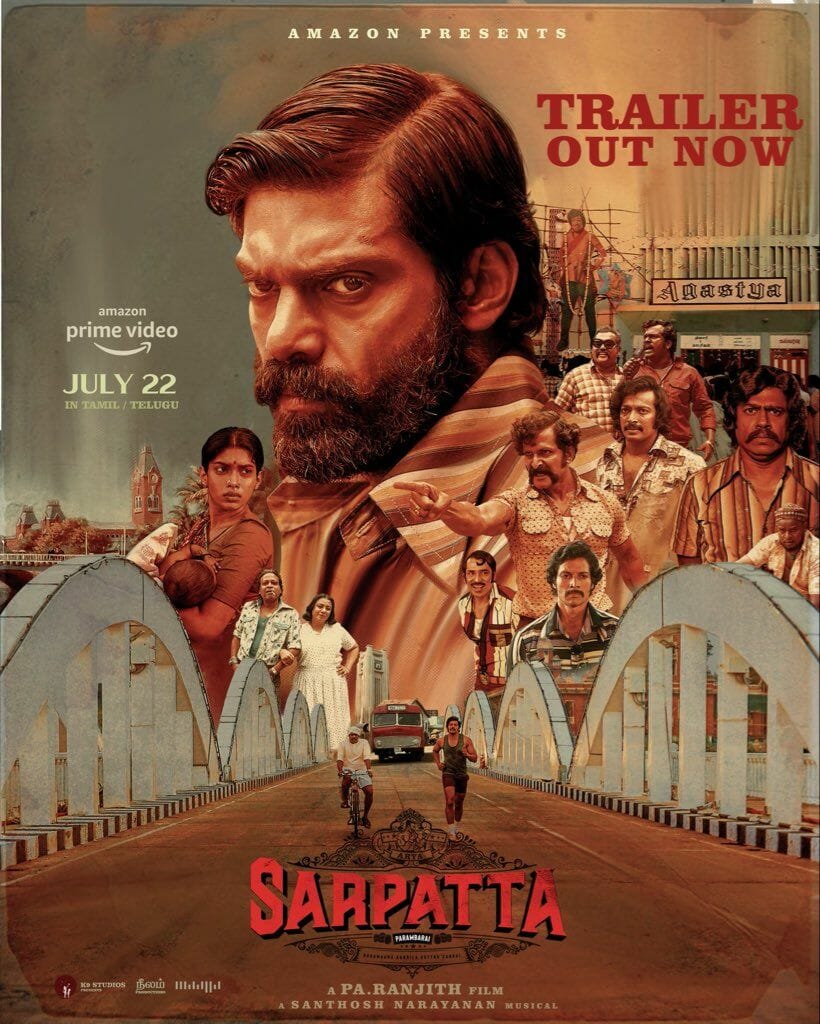 Sarpatta Parambarai opens in a factory in 1970’s where labors are transporting loaded sacks on their back. Just then, youngsters of the village make announcement about the boxing match that is set to take place that evening. When the bell is struck in the factory at the end of days’ work, the workers of the factory hurry to watch the boxing match. Such was the passion for the sport in North Madras in the 70’s. But a little different to other sports, only families dominate the sport. The two dominant families are Sarpatta Parambarai and Idiyappa Parambarai. Naturally, they are fierce rivals. Rangan (Pasupathy) and his clan are the Sarpatta Parambarai and they rule the ring. Rangan is highly respected by the people of the village. But gradually after Rangan’s retirement from the ring, Idiyappa Parambarai rise to glory. Mainly because of Vembuli (John Kokken), the student of Duraikannu (GM Sundar), a former boxer and the head coach of Idiyappa Parambarai. Vembuli is fearless and ruthless to his opponents. Boxers fear to get in to the ring with him.

Though retired from the ring, Rangan continues to train boxers of his clan. However, despite his quality training the boxers of his clan could not defeat ferocious Vembuli, including his sons Vetri (Kalaiyarasan) and Raman (Santhosh Prathap). Then we have Kabilan (Arya), the man who would do the impossible to have that heroic garland on his shoulders. Kabilan’s father was a friend of Rangan and a star boxer popular in the locality. But situation force him to become a henchman for a politician and he loses his life in an ugly way. This incident creates a hatred for the sport in Kabilan’s mother Mariamma (Anupama Kumar). So, she puts blinkers on Kabilan to stay away from boxing. But fate brings Kabilan to the ring. Will Kabilan beat the mighty Vembuli and bring glory to his clan is what makes the rest of the flick.

Generally, films based on a sport piques people’s interest and when it is about boxing, the interest simply spikes. But the issue in making a sport film is, it has no other way, but to travel on a predictable path. A protagonist from a humble background and has a lot of huddles to cross before he could turn a champion. Sarpatta Parambarai is not any different from it. But the way it is written and how it is made, makes it an interesting entertainer. Director Pa. Ranjith gives us a clear picture of how North Madras looked like in the 70’s with the background sets and how the culture and dressing sense was back then with proper costumes. One of filmmaker Pa. Ranjith’s biggest strengths is how he builds his characters and all characters in Sarpatta Parambarai have a part to play in moving the film. Every other film of the director will have a high intensity of politics, Sarpatta Parambarai is bit lagging in that sense. But yeah, he rather speaks in symbols.

Actor Arya has shed a lot of sweat for the film and that is quite evident. In terms of performance, his performance in the film is one of the best performances of his career. He has got in to the skin of the character and has given a whole new dimension to Kabilan. Be it the emotional sequences, or while receiving a punch and while giving it back, the actor showcases his acting prowess. Actors Kalaiyarasan and Santhosh Prathap have put in a lot of hard work for their roles and make their presence felt. Actor Pasupathy cake walks his character. Actress Dushara Vijayan is effective. Actress Anupama Kumar scores well even with a limited screen time. Actor John Kokken is menacing with his physique. Actors Kaali Venkat, John Vijay, G. M. Sundar, Kishore, Maran, Tiger Thangadhurai all have done their part well. Every single artist in the flick have delivered a solid performance.

On the technical front, music director Santhosh Narayanan’s music adds value. Cinematographer Murali G has captured the flick in all the best angles as possible. His frames take us back to the 70’s of North Madras. Editor Selva R. K compliments the work of his colleague with his sharp cuts.

On the whole, despite taking the much-traveled road Sarpatta Parambarai is still a good watch, especially for those who love to catch a sport film.