Endravathu Oru Naal has got right intentions, but can that alone save a flick? Absolutely not. When you want to make a film about an issue you got to hold your audience’s attention till the very end for them to get the message you have packed. What is the use if you lose their attention just after ten fifteen minutes in to the flick?

The OTT platform has been a windfall for many small budget flicks that previously ran in to financial tussle just before its release and stayed in the shelf. The platform has once again turned out to be helpful for a low budget drama titled Endravathu Oru Naal. Earlier this year, the film was screened in the Chennai International Film Festival where it bagged the award for best Tamil film. Actor Vidharth who has not had a single release for the past two years plays the lead role. Actress Remya Nambeesan who was last seen in the anthology flick Navarasa plays the female lead role in Endravathu Oru Naal. Both the actors are in need of a commercially successful film to reestablish their market. Will Endravathu Oru Naal give them the essential push to revive their careers. To know that let us get in to the movie review. 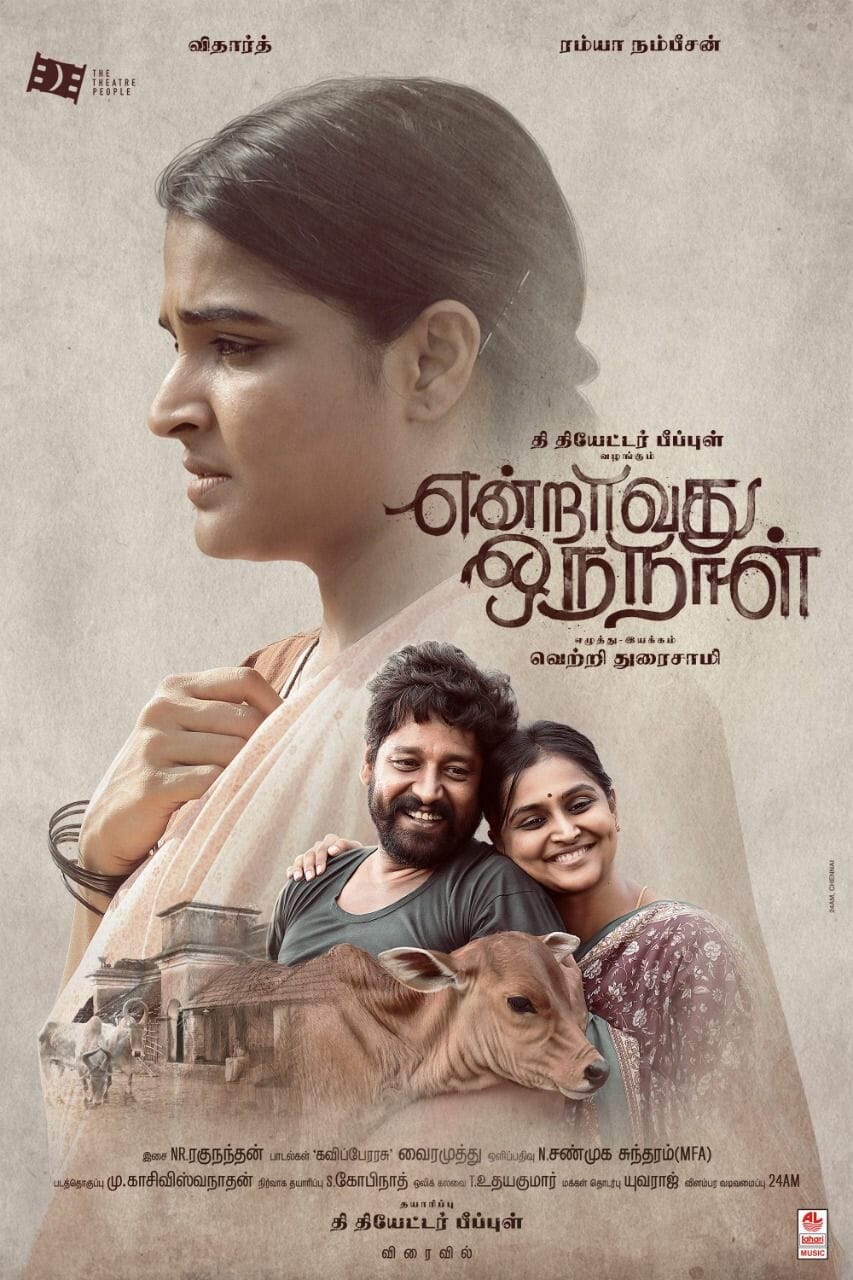 The drama revolves around a poor family living in a village. Thangamuthu (Vidharth), is a small-scale farmer who lives with his wife Rasathi (Remya Nambeesan) and their son Murugan (Master Raghavan). The family owns a couple of calves. Just like most families in the village, even they have a sentimental connection with the calves. Rainfall shortage pushes the village in to drought. The water scarcity sinks Thangamuthu who was barely afloat. In order to keep his family from hunger, Thangamuthu borrows money from a lender. Every day is a struggle for the family. They try to make a living with whatever they could manage to get of their farm. As life go day by day with surging financial crisis for the family, Thangamuthu suddenly pass away. Thangamuthu’s demise hits the family harder. The burden of the family lands on Rasathi’s shoulders. Rasathi enrolls herself in The Mahatma Gandhi National Rural Employment Guarantee Scheme to make ends meet. Even in the face of poverty she ensures her son goes to school.

Fast forward to 10 years. Even a decade after Thangamuthu’s demise the family has still not recovered from the debt he borrowed. The moneylender confiscates Rasathi’s cows for the pending loan repayment. Distressed by his mother’s suffering Murugan express interest to take up a job to support her. At first, she refuses but when the financial state of the family worsens, she runs out of options. She makes up her mind to send her son far away to work a job in an extremely challenging environment. Is Murugan fit enough to work a challenging job, and will Rasathi and Murugan lead a life free of debt, is what makes the rest of the flick.

Endravathu Oru Naal is the latest addition to the myriad of flicks made on farmer’s plight. But unlike most films it does not just use the issue to gain audiences sympathy rather genuinely attempts to shed light on it. Endravathu Oru Naal opens with missing case of bulls. Immediately, last month’s release, Raame Aandalum Raavane Aandalum is recalled to our minds as it was built on this plotline. But as the film progress we see the difference. Director Vetri Duraisamy has made efforts to give a real picture of the miseries of farmers in the nation. Certain portions are poignant and few moments are gravely disheartening. For instance, when you think the family cannot suffer anymore, you are proved wrong, and some kind of mishappening occur and the family goes even further down the hole. They do not even get a temporary relief to recoup from the last fall they took. Life swiftly moves on from one misfortune to another.

Endravathu Oru Naal has got right intentions, but can that alone save a flick? Absolutely not. When you want to make a film about an issue you got to hold your audience’s attention till the very end for them to get the message you have packed. What is the use if you lose their attention just after ten fifteen minutes in to the flick? Endravathu Oru Naal suffers from this mistake. An engaging screenplay with a solid technical crew is what breathes life in to your drama. Dearth of that, Endravathu Oru Naal is what you get.

Actress Remya Nambeesan has bagged a meaty role. She is natural as a doting mother. She once again displays what kind of a performer she can be. Are film makers of Tamil cinema looking at her performances? Actor Vidharth essays an extended cameo role. He makes his presence felt even in the limited screen space. Child artist master Raghavan has matured as an artist. He is getting better with every role he portrays. It would not be a surprise, if we see him as a lead hero in near future. The rest of the cast has delivered what was asked of them.

On the technical front, music director N. R. Raghunathan’s tracks do not stay in our memory right after the moment they finish playing. His background scores add little value to the drama. Cinematographer N. Shanmuga Sundaram’s frames are just passable. Editor M. U. Kasivishwanathan tries to hide the shortcomings of his colleague with his cuts but ends up emphasizing them.

On the whole, with a better technical unit and a little work in the writing department Endravathu Oru Naal could have been a solid poignant drama. But now it is just a potential script watered down to nothing.