OTT launches, anthology films, and mini-series are the new trend of Tamil cinema. Finally, it is happening, Tamil cinema is gradually beginning to move from its mass story culture, and beginning to show intent to make films on human connections and emotions. If there is one director who could put together such an ensemble cast and story tellers, it is film maker Mani Ratnam. In a way, Navarasa’s cast is like a tease to bolster expectation for his upcoming dream project Ponniyin Selvan. So, how has Navarasa come out? To know that let us get into the movie review. 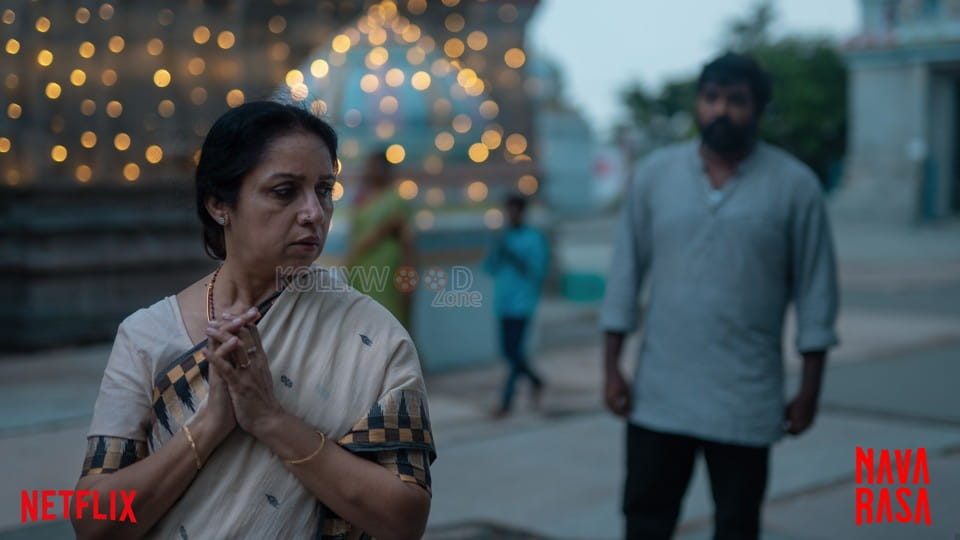 Kamal (Suriya) is passionate about music and aspires to be a great musician one day. Despite his passion he could not infuse that passion in to his music. But things change for good when he meets singer Nethra (Prayaga Martin). And there begins their romance and music journey. Gautham Vasudev Menon’s Guitar Kambi Mele Nindru is one of the most anticipated shorts of the anthology drama. The director once again has tried to bask on his strong suit. Unfortunately, this time around his repetitiveness in scene building is excruciatingly evident. Actors Suriya and Prayaga Martin strive hard to get us in to the romantic zone. However, their every attempt pushes us towards the contrary direction. Singer turned musician Karthik has done a fine job with the musical department.

Payasam takes us back to the 1960s where the presence of a widow (Aditi Balan) in a brahmin wedding raises eyebrows of the guest. This short drama explores the jealousy between family members and to what blatant extent the ego of a man would push him. Veteran actor Delhi Ganesh dons the lead role in Payasam while veteran actress Rohini and Aditi Balan play the supporting roles. Director Vasanth has tried to build his script around Thi Janakiraman’s short story of the same name. He captures the human emotions realistically. But the drama could not bestow an impact in the audience as he would have desired. Perhaps, it is because of the time constraint.

Veluswamy (Yogi Babu), a man who moved to Chennai from his village to pursue his dream of becoming an actor has succeed in his mission, and is now invited to deliver a speech at his school centenary function. He travels back to his village. Seeing the places, he grew up in, brings back the nostalgic memories of his childhood. The problem with story teller Priyadarshan’s short is that while Veluswamy enjoys his childhood memories we could not. They are simply cliche to the cliches. Veteran Malayalam actor Nedmudi Venu and actress Ramya Nambeesan’s roles seem like they do not have a real purpose. One of the challenges in helming a short is penning a role to every artist to their performing standards.

Vijay Sethupathi and veteran actress Revathy are cast in the lead roles in Edhiri. The short drama talks about compassion, guilt, and forgiveness. What intensity of crime that is unleased on a human, can he/she forgive? Is it possible for a human to forgive the murder of their dear one? It is this line that the drama is build on. The story is penned by auteur filmmaker Mani Ratnam. It is the performance of actors Vijay Sethupathi and Revathy that keep us invested in a film that is easily predictable.

Master (Gautham Vasudev Menon), Nilavan (Bobby Simha), and Cheran (Sanath) are the members of the LTTE. They are in a bunker to protect themselves from the firing of the Sri Lankan army. While the firing persists, they see a boy walking around amidst the firing. He is on a quest to save his brother who was taken by the Sri Lankan army. In order to save the life of the young boy, Nilavan makes a daring decision. Director Karthik Subbaraj’s previous film Jagame Thanthiram was also about the people of Eelam, which was subjected to a lot of controversy. Here the director seems to have a clear mind about what he wants to deliver. Actor Bobby Simha’s performance is rightly emotive to hold our attention.

A young boy is brought under police investigation after he hammers a man in rage. What is the reason behind his rage; forms the rest of the movie. Pasanga Sreeram plays the lead role in actor Arvind Swami’s directorial debut. There is a grievance in Tamil cinema about how North Madras is always portrayed in bad shades. Arvind Swami attempts to paint a different picture of North Madras right away in his debut venture. Pasanga Sreeram showcases his acting prowess in Roudhram, and flaunts how well he has matured as an actor. Musician A. R. Rahman and Santhosh Sivan add value to the flick.

Vishnu (Arvind Swami) has made a cutting-edge scientific discovery that could let us know of our future. He shares it with his friend Krishna (Prasanna) who works with the ISRO. They both begin to discuss about the laws guiding the universe, time, alien existence, and on and on. Project Agni is ambitious for a 30 mins odd short. Concepts that it intends to discuss require ample amount of time to be explored. But despite its short fallings, it has something of substance to keep us invested. Actors Arvind Swami and Prasanna cakewalks their role.

Story teller Rathindran R. Prasad’s Inmai explores the emotion fear. It starts of pleasantly and gradually moves towards the tightly composed and suspenseful zone. Actors Siddarth and Parvathy Thiruvothu, plays the lead roles in this short. Actor Siddarth who is well seasoned after doing a handful of horror dramas pulls of his character effortlessly. Actress Parvathy Thiruvothu is adequate.

Vetri (Atharvaa) is a newly joined army soldier who is sent to the forest to fight against the naxalities. In the fight, a comrade (Kishore) gets injured and the job of transporting him to the hospital for medical help is handed over to Vetri. The conversation that they both have is what makes the rest of Thunintha Pin. Film maker KM Sarjun’s film is about courage. It makes a strong point that courage is not opting to take weapons but it is beyond that. Actors Atharvaa and Kishore are superb in their respective roles. Their arresting performance and the powerful dialogues keep us invested in the film till the very end.

On the whole, Navarasa is an anthology with many disappointments and few satisfactions.