Whenever actress Nayanthara plays the protagonist in a film, she shoulders the film beautifully without efforts. But in Netrikann she struggles to convincingly sell herself as a blind woman. Either she tries too hard or underperforms. Actor Manikandan gets a meaty role and is natural as a new-recruit cop. Actor Ajmal Ameer’s performance is quite funny when it is supposed to achieve the contrary effect. The rest of the cast has delivered what was asked of them.

If there is one actress in K-town who successfully maintain the equilibrium of staring as a pair for lead heroes and don the lead role themselves, it is actress Nayanthara. A trend that the actress brought back to Tamil cinema. While rest of her colleagues find it difficult to make it work for them, the actress runs her show effortlessly. The actress who was last seen in Mookuthi Amman is back with her crime thriller Netrikann. The actress has upped her game by opting to essay a challenging role of a blind women. The film is the Tamil remake of the acclaimed South Korean drama Blind. So, how has the Tamil version come out? To know that let us get in to the movie review. 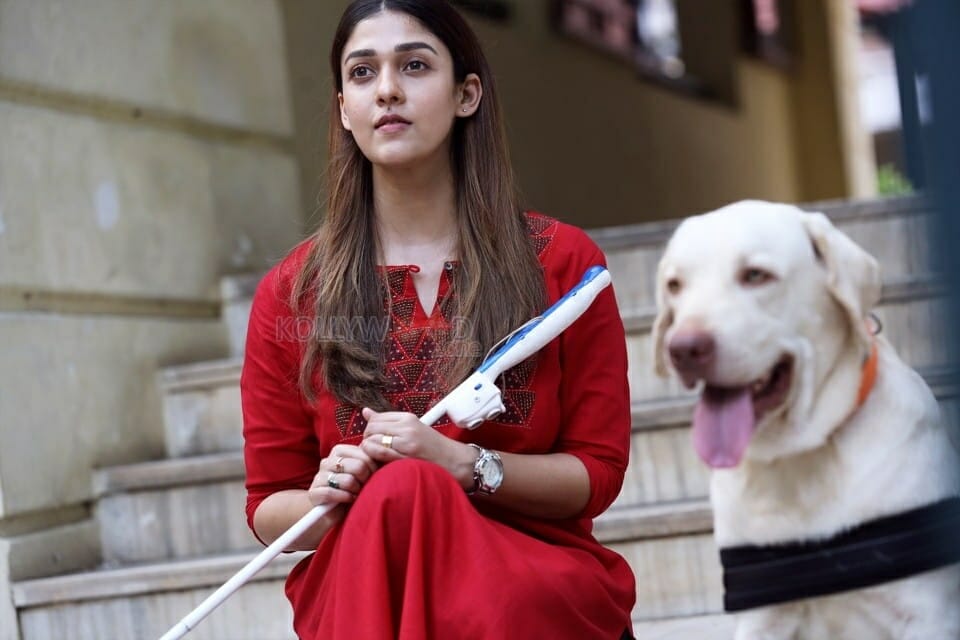 The film follows the life of Durga (Nayanthara), a CBI officer and a loving sister who is very protective of her brother Adithya (Sacchin Nachiappan). The film opens with Durga pulling out her brother from a party. When he refuses to go with her, she thrusts him in to the car, handcuffs him to the seat, and the duo head home. On the way they get playful while driving, which results in an accident that reverse the life of Durga. In the accident Durga loses her brother and her eyesight, and her disability take way her job from her. But a woman of will power, she adapts to her new life by learning braille, self-defense, and necessary things for her survival. She takes a dog named Kanna as her companion who help navigate her new life. While she gets accustom to her new life, in walks a serial killer (Ajmal Ameer) who suffers from perversion. He kidnaps young girls in the city, takes them to his dungeon, torture them to satisfy his kink.

On one instance, his path cross with Durga and that puts them against each other. He underestimates her ability and tries to have his way with her like the rest of his victims. We have a lengthy chasing bit. In the end Durga escapes from him. This touches his ego and he wants to nab her even if it means to end up getting caught. On the other hand, Durga make it as her personal mission and decides to go after the psychopath. A newbie in the department named Manikandan (Manikandan) gets impressed by her ability to layout incidents as if she witnessed them and tags along with her to solve the case. Soon a delivery boy named Gautham (Sharan Shakthi) joins them and together the trio hunts for the serial killer. Will Durga and her sidekicks incarcerate the killer before he abducts another young girl, is what makes the rest of the flick.

Making a solid crime thriller is hard. Making a solid crime thriller with a blind person as its protagonist is harder. Netrikann or the remake of South Korean drama Blind attempts to do the harder thing. The plot of a blind woman going after a callous serial killer might look quite interesting on paper and stir up our expectations. But when it transpires to the visual medium, it simply does not live up to the expectations. The challenge in having a blind person – especially of a person who is just getting used to her loss of sight – track down a serial killer is, its convincing-the-audience aspect is high. How will they recognize a person, how will they identify a spot, how will they know what is happening around them, there are too many questions that needs to be answered to get the audience to connect with the character. Unfortunately, Netrikann does not answer these questions convincingly and rather tries to rely on the star power of the actress.

Netrikann suffers from the same factors that other thrillers of Tamil cinema suffer from: predictability and lazy writing. Other than the blind woman element Netrikann is not much different from other crime thrillers. The comfortable writing further worsens the plot. For instance, the killer nabs his victim is public places, and we have nobody around just so he could finish his job, he chases them around the spots under cctv surveillance, yet not even one camera gets a clear picture of him. The dragged chasing bit and the flashback portions of the killer test our patience. The reason as to what turned the villain in to a psychopath paints a complete absurd picture. Even the characterization does not help lift the film. Except Durga & Manikandan’s character sketch, the rest of the characters are poorly shaped and don’t have much to offer to the proceedings.

Whenever actress Nayanthara plays the protagonist in a film, she shoulders the film beautifully without efforts. But in Netrikann she struggles to convincingly sell herself as a blind woman. Either she tries too hard or underperforms. Actor Manikandan gets a meaty role and is natural as a new-recruit cop. Actor Ajmal Ameer’s performance is quite funny when it is supposed to achieve the contrary effect. The rest of the cast has delivered what was asked of them.

On the whole, with little effort in the writing department, Netrikann could have been a unique crime thriller film. But now it is just an opportunity squandered.